Progressive Conservative members say they're willing to look beyond past grievances 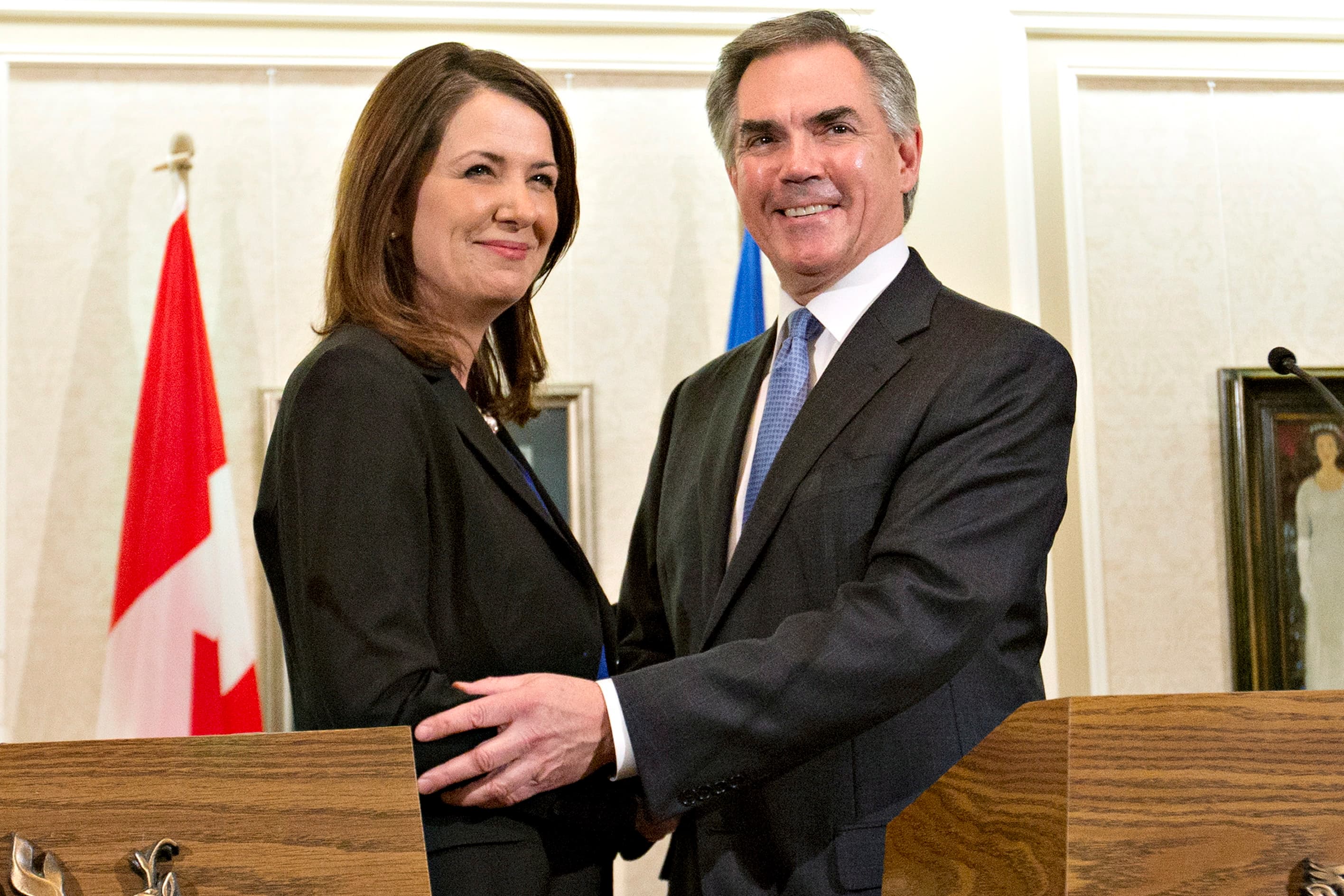 Premier Jim Prentice made the announcement late Wednesday afternoon after a day-long meeting, where PC MLAs voted in favour of bringing the new members into caucus.

"This is not a merger of parties, let’s be clear about this," he said in a joint news conference with Smith.  "This is a unification of conservatives as Progressive Conservatives."

Those crossing the floor are:

Smith said she was joining the party because Prentice's values were similar to the Wildrose. She and the other 8 MLAs decided to cross after agreeing to a set of "aligned values and principles."

Alberta has had four premiers since Smith became Wildrose leader in October 2009: Ed Stelmach, Alison Redford, Dave Hancock and Prentice. She said Prentice is the first to meet with her.

"Past premiers have merely paid lip service to these issues, saying the right things and then doing the opposite," Smith said. "But Premier Prentice has shown me and my caucus that he is different."

Prentice became premier in September after winning the race to replace former PC leader Alison Redford. Talks had been underway for the past several months about uniting the right but Smith said they became more "intense" in the past two weeks.

"I am confident, having met with the premier, having watched him in action for the last number of weeks and months, that he shares these values," she said.

In her resignation letter as Wildrose leader, Smith asked the party to hold a membership meeting and pass a reunification resolution. She had led the party since October 2009.

Prentice rejected the suggestion he was moving the party farther right by allowing the former Wildrose members into the party.

“We are moving ahead as a broad tent Progressive Conservative party that can accommodate these nine individuals as people whom we respect and whose voices we want inside our party and our tent," he said.

Many political observers believe Prentice must have offered cabinet positions to Smith and Anderson, another high-profile Wildrose MLA. But Prentice said no decisions have been made yet.

"I can’t see anything that looks quite like this in terms of an all out victory for a politician, he said. "So as of today, this looks like really an amazing feat on the part of the Prentice government."

While it might be great for Prentice, Soroski argues, a diminished Wildrose Party may not be great for a province governed by the PCs for the last 43 years.

"Here we had an opposition that was arguably the best opposition that we've had in Alberta for 30 or 40 years largely now decimated as a result of these decisions that have been made," he said.

"So we see a province now where have really little very solid opposition against the provincial government."

Wildrose won 17 seats in the April 2012 election. Last month, Joe Anglin quit the caucus to sit as an independent. Political watchers were stunned a few weeks later when Kerry Towle and Ian Donovan left the party to join the PC caucus.

The change leaves the PCS with 72 seats and Wildrose with five. The Liberals hold five, the New Democrats have four and there is one Independent MLA.

Liberal Leader Raj Sherman has written a letter to the speaker of the legislature, asking for his party to become the official opposition.

“Ultimately the speaker will make the decision,” he said.  “But it's time Alberta gets a progressive, centrist alternative to the Conservatives in opposition."

People in the Wildrose party executive say they are disppointed in Smith's decision. Many people expressed outrage on her Facebook page.

"You are just another politician looking after your own interests and not the interests of the people of Alberta," Denis Babin wrote. "Very Shameful. You should resign."

"I am very sorry I ever supported you," wrote Anne Bell. "I thought you were different. The PCs are not embracing you. They have effectively shut you up. Shame on you … this is not leadership"

Word that Smith was joining the PCs was revealed by Wildrose Party insiders on Tuesday. Earlier on Wednesday, people in Smith's constituency were unimpressed.

“I think a lot of people are irritated right now by the move, to be honest,” said Hubert Aumeier. “I think she’s in some hot water.”

But some were willing to keep supporting her.

"I really believe in her and what she has to offer as a political person. said Deborah Moshenko. “She’s very much interested in people and helping and supporting them."

Things weren't always so rosy between the former Wildrose MLAs and the PC government. Here are some tweets and retweets from the past: