Opposition to Bill 6, which aims to subject farms and ranches to workplace safety rules, has been growing ever since it was first introduced two weeks ago.

'We could have done a better job in communicating,' says Labour Minister Lori Sigurdson 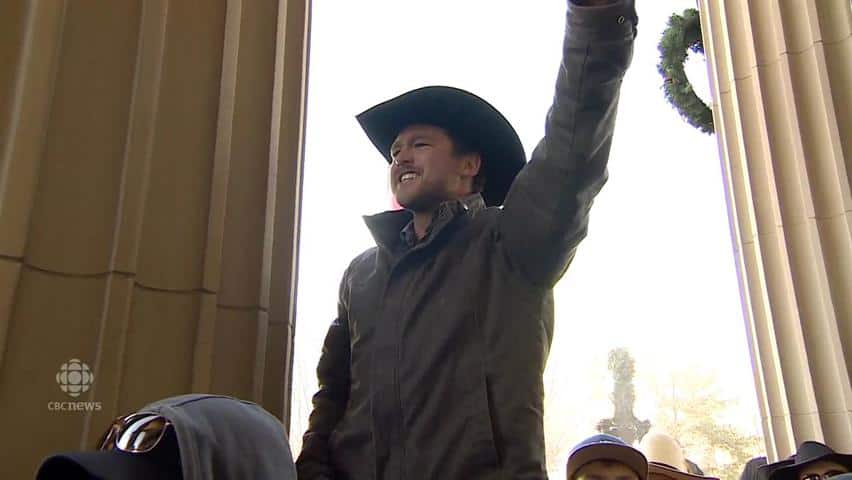 Hundreds arrive at the Alberta legislature to protest Bill 6

5 years ago
1:28
Family farmers are upset with Bill 6 and the implications the Bill has for agriculture in the province. 1:28

About 1,000 farmers carried signs and shouted "Kill Bill 6" at a raucous rally at the Alberta legislature on Monday.

Opposition to the bill, which aims to subject farms and ranches to workplace safety rules, has been growing ever since it was introduced two weeks ago. Farmers are angry the bill was introduced before they were fully consulted.

They say the rules should only apply to large corporate farms, not small family operations. They believe the bill will prevent neighbours from helping them with harvesting and calving, and prevent children from helping with chores.

Coral Robinson farms near Glendon, Alta., about three hours northeast of Edmonton. She told the crowd the government should make an exemption for smaller operations.

"We believe there is a place for (occupational health and safety) in the farming industry, but there is one special and unique distinction that should be made, and that is for the family farm," said Robinson. "Other provinces have this distinction. Why can't we?"

Although Jobs, Skills, Training and Labour Minster Lori Sigurdson characterized the protest as "democracy in action," she suggested people are reacting to misinformation, which she takes responsibility for.

"We could have done a better job in communicating and going forward, that's what we want to do," she said.

"A lot of the fears,the things that they're concerned about, they're not really going to happen anyway."

Sigurdson said implementation of the bill won't be delayed. The first measures, which include mandatory WCB coverage, will take effect Jan. 1.

However, when Agriculture Minister Oneil Carlier was asked if the bill could be delayed, he said "anything is a possibility." He said exempting family farms could be an option if such operations don't hire outside workers.

The government said it will also change who attends town hall meetings about the bill.

While fielding questions for absent Premier Rachel Notley, Health Minister Sarah Hoffman said the government will send cabinet ministers to upcoming consultation meetings after a officials at a forum in Grande Prairie were unable to answer questions from farmers.

"I have been informed that there was some misinformation shared by officials at the meetings. That is being rectified," she told the legislature.

"Bill 6 is not a perfect bill. I support changes to this legislation, particularly when it comes to creating exemptions for family farms," Swann said in a statement.

"However, these changes can and should be made on the floor of the house as legislators debate the bill in the next two weeks."