Trump accused of giving 'a shot of adrenalin' to Canadian racists

A series of hate crimes in the U.S. linked to supporters of Donald Trump has raised questions about whether the perpetrators of a handful of racist incidents in Canada have been emboldened by such acts south of the border.

But experts, activists say hate crimes not a new phenomenon in Canada

A series of hate crimes in the U.S. linked to supporters of Donald Trump has raised questions about whether the perpetrators of a handful of racist incidents in Canada have been emboldened by such acts south of the border.

"I think what has happened at this point, sad to say, is that Trump has given permission for the racists ... who have been hiding in garbage cans, to pop their heads up and say, 'Look, wow, fresh air here, time to get busy,'" said Bernie Farber, executive director of the Mosaic Institute, a Toronto-based think tank that promotes intercultural dialogue, and former head of the Canadian Jewish Congress.

Farber appeared on the CBC radio program The Current, along with Barbara Perry, a professor of social science at the University of Ontario Institute of Technology, and freelance journalist and activist Desmond Cole, to talk about the possible rise of hate crimes in the wake of Trump's victory.

Farber, who said that since the election he has received eight or nine death threats via Twitter, said it's important to remember that Canada has not always been the "clean-cut cousin" of the U.S. Canada has, and continues to have, its own racists, bigots and neo-Nazis, he said.

In the wake of the election, several racist acts and threats have been reported across the U.S. Trump's campaign has been blamed for fuelling racist rhetoric and xenophobia while attracting support of the so-called alt-right white nationalist movement.

Over the past week, some racist incidents in Canada have also made headlines.

Perry, who has tracked white nationalist groups, said that according to her data, there are about 100 active groups — a figure she thinks is a dramatically low estimate. She said there has been an uptick in the number of groups over the past year but that it's hard to say whether that's related to the Trump candidacy.

The vast majority of hate crimes are perpetrated by individuals with no ties to hate groups, said Perry. And Canadians can hardly avoid being exposed to the events around the election in the U.S.

"The border, of course, is so porous when we're talking about the extension of this sort of rhetoric," Perry said.

She said she wasn't surprised it has "infected us in much the same way."

'This is not new'

Cole, however, said some might perceive Trump's victory has having given people permission to perpetrate racist acts in a more public way now, these types of incidents are common.

​"This is not new," he said. "It's not simply inspired by what's happening in the United States ... some kind of copycat effect here."

Farber said there are racist loners out there now who are feeling empowered by Trump.

"I think what we saw on the [Toronto] streetcar was a fine example of a person who felt 'Wow, I can say whatever the hell I want to say now.'"

Emine Fidan Elcioglu, an assistant professor of sociology at the University of Toronto, said that she has heard, anecdotally, about people making overtly racist remarks to people of colour since the election.

"This is certainly very disturbing, especially when we see that this racist rhetoric is being normalized in places like school classrooms," she said.

'Did not just suddenly emerge'

"That said, we should remember that racism did not just suddenly emerge on Tuesday night with Trump's election," Elcioglu said. "For the last eight years, the U.S. has had a Democratic administration led by a black president." 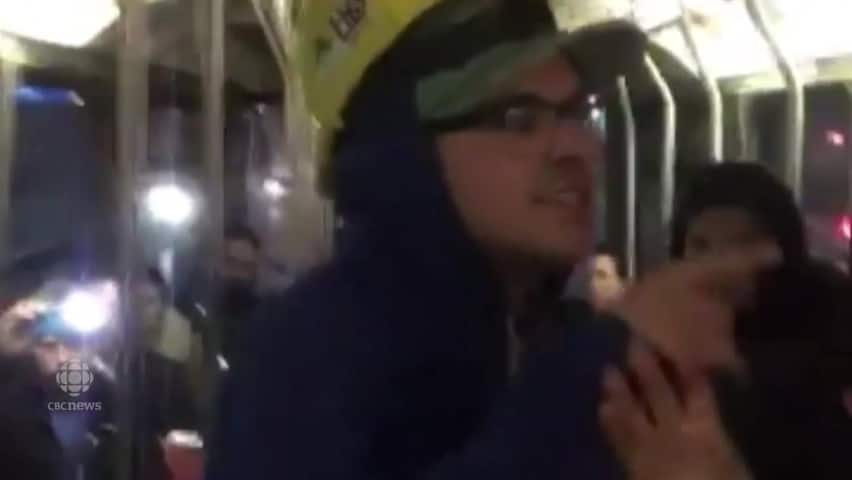 4 years ago
3:16
Commuters stepped in to break up an altercation in which one man yelled racist insults and threatened another man. 3:16

The recent incidents are, indeed, shocking, she said, but the motives behind them are not new, she said. Nor can the blame for racism in the U.S. be assigned to Trump and Trump alone.

"His unfiltered rhetoric may sound disturbing to much of America, but much of America has been masking its existing biases for decades," Elcioglu said.

"I think it is important to remember that the racist rhetoric that has been unleashed by the campaign and the election is really the logical conclusion of institutional racism that preceded Tuesday."