Is a global conflict really a thing of the past, 75 years after Canadian troops stormed the beaches of Normandy? Military and defence experts are stark in their assessment of what a world war could look like now, former CBC chief correspondent Peter Mansbridge writes.

When Canadian troops hit the beaches of Normandy 75 years ago this week, it followed months and in some cases years of anticipation. Finally, the Allies were making their move to open a western front and crush the evil that was Hitler once and for all.

The men came from points across Canada. From the Maritimes, the Prairies, Ontario and Quebec. They were farmers and teachers, lawyers and athletes. Some had signed up with their friends, travelled across the Atlantic together, trained in southern England together.

And then, in June 1944, they hit the staging area, boarding the ships that would take them across the English Channel —  together. It was a rough journey through stormy seas and as a result, side-by-side, they threw up — together.

Then, suddenly, the barrier at the front of their landing craft dropped down and they were on their way, under fire — together.

Even in the chaos of war now surrounding them, they remembered the one instruction that had been pounded into their brains time and time again: If anything happens to the man beside you, don't stop, don't stop for anything, keep charging up the beach to engage the enemy.

Think about that for a moment.  You left that small Saskatchewan town with your buddy, you trained with him, you laughed with him, you drank with him.  And now, there he was right beside you lying in the sand, bleeding to death. And you had to leave him.

Peter Mansbridge answers your questions about the 75th anniversary of D-Day:

It was a brutal, awful battle, but the Canadians, with the Americans and the British on other beaches nearby, won the day. Eventually, 11 months later, with the help of the Soviets to the east, they won the war.

That was how the Second World War ended, but not before it had left millions dead and many countries in ruin. Just like they had after the First World War, everyone agreed that they could never let it happen again.

I was born in the years immediately after the final shot had been fired. A first-wave baby boomer. I grew up hoping the era of global conflict was over, but no one took that for granted. In fact, I remember doing the "duck and cover" under the school desk as we prepared for what could come with a nuclear attack.

But it never came and generation after generation has grown up without having to go through what our parents and grandparents did — participate in a world war.

So have we been lulled into the belief that there never will be a Third World War? That while regional conflicts do happen, a global conflict — a world war — is a thing of the past?

What do some of the best defence and military minds around the world think about this? Do we have permanent global "peace in our time?" And if we don't, what would a Third World War look like?  And what could prevent it?

The answers are stark and arresting.

Like this one from Graham Allison, a name revered in defence circles from Washington to Beijing, from London to Moscow. Allison is in his 80s now, teaches at Harvard University and isn't shy in his prediction of the chances of a global conflict.

"One in three over the next decade or two.  At least," he said.

One in three. Let that sink in. I don't much like those odds. I'm 70, I've had my time. But my kids and my grandkids?

'The stuff of history'

Who are the likely combatants? Allison is more concerned about the rising military and economic power of China than Russia. He's worried most of all that the United States could be provoked into a war with China because of the actions of a third smaller party like North Korea.

But worried he is and he cites history as the reason.

"Great power wars have been the stuff of history for thousands of years, and seven decades without [a] great power war is an exception."

Watch a clip from Peter Mansbridge's documentary The Future of War: 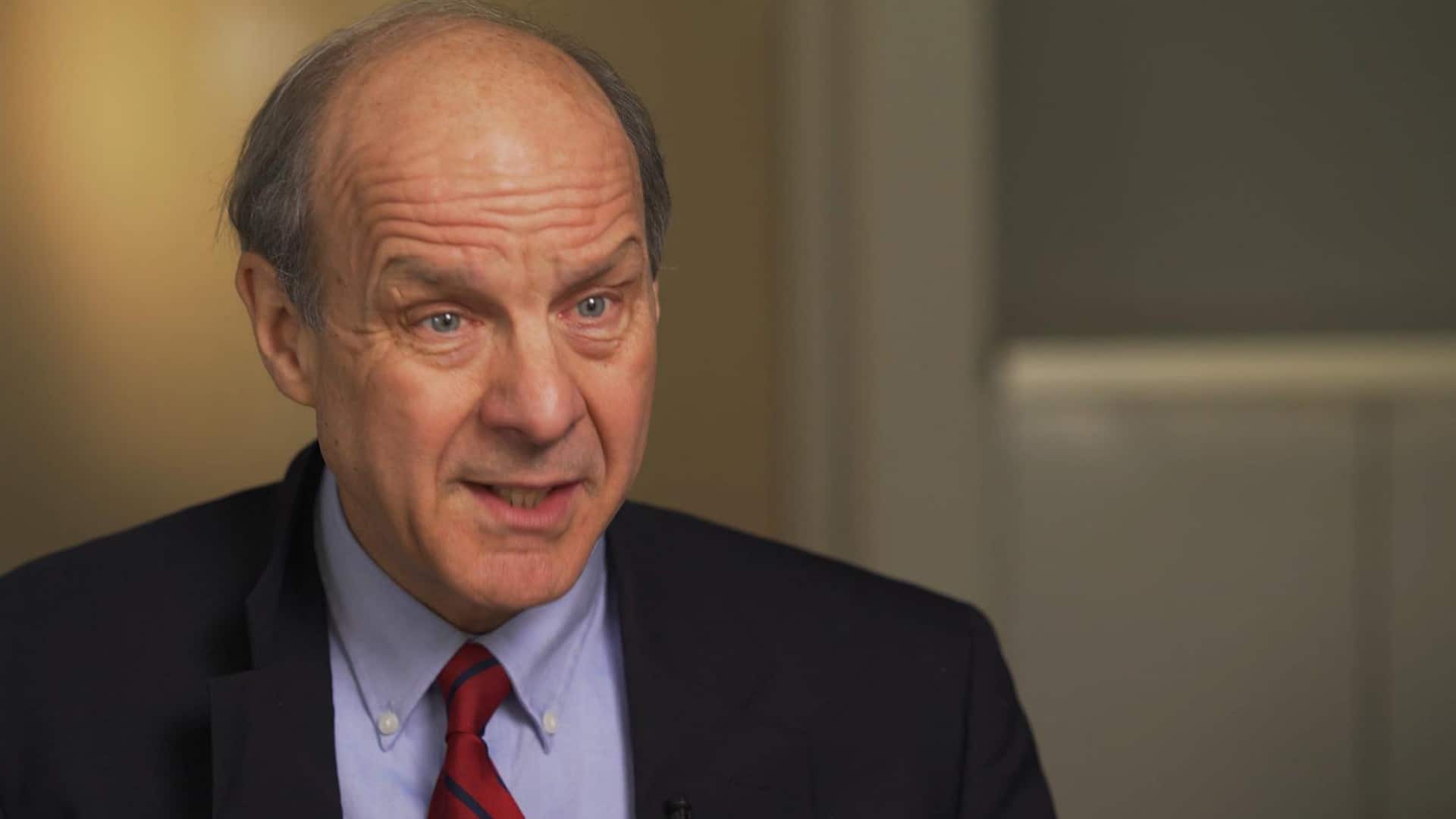 The Future of War

If there's one thing the experts were sure of, it's that if there is global conflict, it won't look anything like the last time.  In other words, no more Normandy.

But after that, their views on what it could look like can be quite different.

"It's quick, it's intense. It's very, very bloody" said David Ochmanek, a former senior Pentagon official and now a senior policy analyst with the Rand Corporation, a global policy think-tank.

But for Peter Singer, co-author of the much-discussed Ghost Fleet: The Next World War and a policy analyst with the think-tank New America, the next global conflict would be all about computers and cyber warfare.

"The opening battles of World War Three might be utterly silent, software playing out with the zeros and ones of a malware attack."

Or cyber used much more directly against the weapons of war, said Paul Scharre, author of Army of None: Autonomous Weapons and the Future of War.

"The worst-case scenario is someone hijacks your military forces in a way that's not even conceivable today."

Not conceivable today? How about the enemy taking over your command and control and directing it back against you?

This is all scary stuff, and Canadian historian Margaret MacMillan acknowledges how it will change any future battlefield, but doesn't ignore the threat that's existed since the last hours of the last war.

"We tend to think of world wars as being long, drawn-out wars of attrition, which is what both the First and Second World Wars were, but given the nature of the weaponry at the moment, I think it is quite possible there might be an exchange of nuclear weapons and then there won't be much left, and you know, they will have to make peace."

Making peace is what those young Canadians were hoping for when they hit the beaches in France on D-Day 75 years ago.  Hundreds never lived long enough to find out whether the invasion was successful. Thousands more would die in the months that followed before the peace was won.

We remember them all and hope we'll never have to ask another generation to sacrifice as they did.  But these are challenging times and more than hope will be needed.

"The best chance of us all staying alive and our children staying alive through the future era is to resist the idea that there are solutions to any of these complicated problems. World affairs are always about constantly managing things and keeping talking at all costs."

Talking. What a concept.

Watch Peter Mansbridge's documentary The Future of War on CBC-TV on June 5 at 9 p.m. ET or any time on CBC's Gem streaming service. Produced by Lynn Burgess and edited by Sheldon Beldick with camera work by John Badcock and Jason Burles and art direction by  Frydun Mehrzad.