Credit rating mistakes are costing unsuspecting consumers thousands of dollars in higher interest rates and preventing some from getting much needed loans, a CBC News investigation has found. 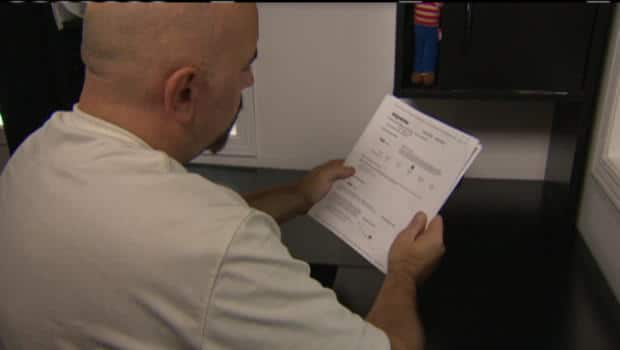 8 years ago
4:21
Credit rating mistakes are costing unsuspecting consumers thousands of dollars in higher interest rates and preventing some from getting much needed loans, a CBC News investigation has found. 4:21

Credit rating mistakes are costing unsuspecting consumers thousands of dollars in higher interest rates and preventing some from getting much needed loans, a CBC News investigation has found.

In the past few years, more than 500 complaints have been filed with provincial consumer affairs agencies across Canada about credit reporting agencies, many alleging errors by companies led to their poor credit scores.

"I feel like a guy who is made to pay for the sins of something I didn't do," said Mervin Smith. "It's like being wrongfully accused of something."

Smith is one of many Canadians who told CBC News about how unknown errors on their credit rating reports caused them financial strife. In some cases, even after creditors and collection agencies admitted to a mistake, it took several months to restore a credit rating.

The Brampton, Ont., truck driver, spent months trying to get his credit rating fixed after an error appeared on his credit report.

When applying for a mortgage in late 2011, Smith learned that an unpaid Rogers bill for a "Marvin Smith" had been listed on his report since 2007.

If you have any information on this story or any other story please contact us at investigations@cbc.ca.

He says his bank granted him the mortgage but denied him an overdraft, a credit card and a line of credit.

Smith sued debt collection agency iQor in small claims court over the name mix-up and won a $3,000 settlement in May of 2012.

Despite that, his Equifax credit report still refers to him as "also known as: Marvin Smith."

"I just applied for another card and I got turned down again and I had perfect credit," said Smith.

Dan Barnabic, a Toronto paralegal who has represented clients in credit disputes for the past seven years, said the impact of a false credit score can be devastating.

"You are what your credit is," said Barnabic. "And when you discover something that actually does not belong to you…, that will actually prevent you from getting credit, it's devastating. It turns into a horrific situation that people lose sleep over."

Few statistics are available about how many Canadians know about mistakes on their credit reports.

Consumer Protection BC, a non-profit that oversees provincial consumer laws, says that in the past three years it has received 341 calls from people complaining about inaccurate information on their credit reports.

But many provincial consumer protection agencies don't track how many complaints about credit ratings are about potential errors.

A national survey by the non-profit Public Interest Advocacy Centre published in 2005 found that 18 per cent of the people surveyed had discovered inaccuracies in their credit report. Ten per cent of those who discovered the issue believed they were denied access to financial services due to the errors.

Barnabic estimates the number could be much higher. The Toronto paralegal says about one-third of his approximately 3,000 clients have found inaccuracies in their credit reports.

"On a weekly, daily basis people would knock on my door and say, 'Dan, I have a problem. I have something on my report that does not belong to me,' " said Barnabic.

Under the credit reporting system, companies — such as phone service providers and banks — provide information about clients and their payment history to Canada's credit bureaus, such as Equifax Canada Inc. and TransUnion Canada.

Companies pay a fee for the bureaus to keep track of clients. In return, the credit bureau provides the companies with access to consumer credit reports, which is based on information gleaned from all its client companies.

When a bank is deciding whether to grant a mortgage, for example, the financial institution can access the individual's credit record via a request to the credit bureau.

Consumers can also request to see their credit rating but few do. A mistake can go unknown for months or even years, potentially leading to extra interest costs or other issues.

Joan Biseau, a hospital technician in Moncton, N.B., believes she is still paying thousands of dollars in extra interest on a vehicle she recently purchased after her credit rating was downgraded due to an error by Rogers Communication.

Biseau was unaware of an outstanding charge on her Rogers account until three years after the fact, when a debt collection agency began calling in February, 2011. Biseau promptly paid the bill when notified.

The telecom company had sent her last bill for about $200 to the wrong address and later admitted to the mistake.

Despite Rogers acknowledging its error, the black mark remained on her credit rating for more than a year.

Biseau says it forced her to get a high-interest loan on the 2007 Chevrolet Cobalt she bought in September of 2011, increasing the cost of her purchase by up to $10,000.

The information about the owed debt was removed from the TransUnion and Equifax credit reports after CBC contacted Rogers and Equifax.

Paul Le Fevre, Equifax Canada's director of operations, says the agency depends on correct information from its member companies. Mistakes are rare, he said, but when they do happen, the company needs the creditors who supplied the information to sign off on it.

TransUnion also responded in a written statement, stating that it aims to "maintain accurate information on every consumers' TransUnion credit report."

Consumers can report items believed to be inaccurate by phone or email and the company will investigate it, the statement said.

Under current provincial consumer protection legislation, companies can face fines, but Barnabic says the fines are rarely, if ever, used.

The Toronto paralegal says the federal government should oversee the credit rating industry rather than leaving regulation in the provinces’ domain.

"Our elected government so far has showed very little interest in improving the system and actually getting the consumer on equal footing with the financial sector," said Barnabic.

He suggests modeling it on the U.S. system, where credit bureaus must by law investigate consumer complaints about disputed information on their credit rating report within 30 days.

Barnabic says credit bureaus should be forced to either delete errors immediately or face a hefty fine.

If you have any information on this story or any other story please contact us at investigations@cbc.ca.