The latest on the coronavirus outbreak for Nov. 4

The latest on the coronavirus outbreak for Nov. 4.

The chair of Britain's coronavirus vaccine task force says data evaluating the efficacy and safety of its two most advanced candidates should be available in early December, The Associated Press reports.

Kate Bingham told a parliamentary committee on Wednesday that data on the two vaccine candidates — developed by Oxford University and AstraZeneca, and Pfizer and BioNTech — should be available by then. After that, the vaccine candidates will need regulatory approval, Bingham said. "If we get that, we have the possibility of deploying by year-end," she said.

The Canadian government announced agreements for millions of vaccine doses with Pfizer/BioNTech in early August and with Oxford/AstraZeneca in late September, should either make it through clinical trials and be approved by Health Canada.

Dr. Robin Shattock, one of the scientists behind another vaccine developed by Imperial College London, said it's possible several vaccines will be needed to stop the pandemic. "The first vaccines may reach the bar of preventing severe disease, but they may not necessarily block transmission," he said. Shattock said later vaccines likely will be more potent, but it's still unclear how long immunity lasts and vaccines "most likely will need to be boosted."

On Tuesday, Dr. Theresa Tam, Canada's chief public health officer, said in a statement that although there is no approved COVID-19 vaccine at this time, "we remain cautiously optimistic that safe and effective COVID-19 vaccines will be available in the first quarter of 2021."

Click below to watch more from CBC News Network 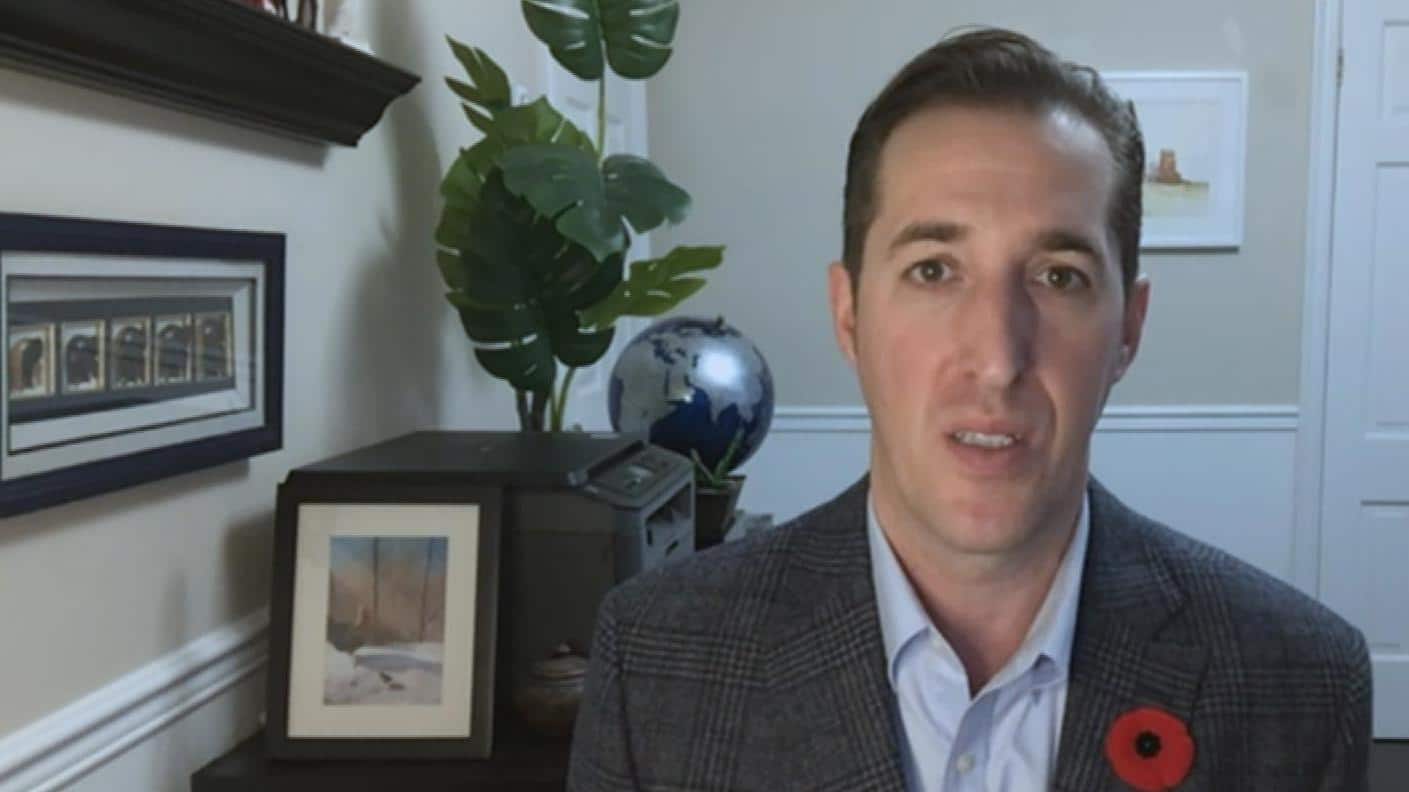 COVID-19 management in the U.S. a 'mess' at several levels, says expert

2 months agoVideo
1:32
There was poor cohesion between leaders at the state and federal levels in the U.S. over managing COVID-19, says infectious disease specialist Dr. Isaac Bogoch, who also hopes that voting on Tuesday won't cause a major superspreading event. 1:32

One day after Ontario released its new colour-coded COVID-19 guidelines, doctors and other public health experts are expressing concern that the threshold for tightening restrictions in the hardest-hit areas is set too high.

In the new system, four public health units — Peel, York, Ottawa and Eastern Ontario — are set to be classified in the new orange, or "restrict", category on Nov. 7. The same will happen in Toronto a week later, on Nov. 14. Under the new category, businesses that had been closed or more tightly restricted under the old rules will have those limits relaxed. For example, gyms will be able to reopen and bars and restaurants will be able to serve customers indoors with certain restrictions.

For them to be shut down again, and for a public health unit to be moved to the red, or "control" level, the area's positivity rate (sometimes also called "per cent positivity") would need to be above 9.9 per cent. The province would also look at factors like hospital and contact tracing capacity. "Ten per cent positivity is really, like, you have no clue what's going on in your community," said Dr. Zain Chagla, an infectious diseases physician at St. Joseph's Healthcare in Hamilton. "Things are running wild at that point."

Colin Furness, an infection control epidemiologist and assistant professor at the University of Toronto, argues that the new guidelines, and especially the move to further reopen the province's hot spots, are a step firmly in the wrong direction and will inevitably lead to a jump in cases. "The premier really wants businesses to be open, and he wants things to get really bad before he closes them down again," he said. "By the time we move into red, it won't matter. We're going to have to go straight to grey [the highest level] and lock down. Having to close down so much more than restaurants is now a foregone conclusion."

Active cases of COVID-19 jumped to 500 from 362 in the last week, according to data from Indigenous Services Canada. In the last week, 356 new cases have been reported on-reserve, with the majority occurring in the Prairies.

Cases in Manitoba doubled, while Quebec also saw a spike in cases. Akwesasne, south of Cornwall, Ont., announced that it is dealing with an outbreak after five cases were reported in the Mohawk Council of Akwesasne's northern jurisdiction and four cases in the Saint Regis Mohawk Tribe's southern jurisdiction.

"While we understand the effects of COVID-19 fatigue, we cannot let our guards down," the Mohawk Council said in a news release. "The time to take collective action is now in order to prevent a much worse scenario and stricter measures in the future."

As of Nov. 2, there have been a total of 1,610 cases on-reserve in Canada since the pandemic started. Ten additional hospitalizations were reported since last week, bringing the total to 83. The death toll remains at 15. The number of First Nations people who have recovered from the disease has reached 1,095.

Winnipeg police say 'time for education has passed,' will crack down on parties to curb COVID-19

Winnipeg police say they're stepping up enforcement of COVID-19-related public health orders immediately, taking particular aim at house parties and other big gatherings. "Our job is making sure people understand how serious this is and we are going to do that through fines," Winnipeg Police Service Const. Rob Carver said at a Wednesday morning news conference.

Rule breakers will find that a large party in pandemic times is a higher priority for police than it was previously. Calls will be triaged based on a number of factors, including whether they involve an urgent public safety concern, he said.

Not every call will get immediate action but when officers do go out, they will be primed to hand out penalties that hit people hard in the wallet. Fines for individuals breaching public health orders have been increased to $1,296 — the second-highest penalty of its kind in Canada.

Saskatchewan's incoming mandatory mask rules don't apply to people exercising indoors, an exception one researcher says doesn't make sense. Phil Chilibeck and a team at the University of Saskatchewan have published a new study
showing mask use, even three-layer coverings, has no effect on exercise performance, oxygen levels or any other indicator for healthy individuals.

Chilibeck plans to pass the findings to provincial health authorities and hopes they'll reconsider the exemption. "In closed gyms, there is a good potential for COVID transmission," Chilibeck said. "People should be wearing masks. It should be the rule."

With record case numbers over the past several days, the new mandatory mask order takes effect Friday in Prince Albert, Saskatoon and Regina. Masks will be required for people in most public indoor spaces, but people engaged in physical activity will be exempt. The order will remain in effect for at least 28 days.

The study was conducted with U of S colleagues Keely Shaw, Scotty Butcher, Jongbum Ko and Gordon A. Zello, and published in the International Journal of Environmental Research and Public Health. Participants rode stationary bikes with or without various types of masks. Their results were "identical" for both maximum power output and endurance under all mask scenarios, he said.

Chilibeck said he's worn masks during exercise for years when conducting research in parts of China or other highly polluted areas. "You get used to it after a while."
AND FINALLY...

Widespread use of outdoor heaters could mean a big carbon footprint

Patio heaters are expected to be a crucial part of efforts to encourage outdoor dining during the COVID-19 pandemic, and demand for the devices has surged as businesses try to entice customers to keep eating outside as temperatures begin to drop.

But those heaters — especially the type that runs on propane — carry a significant carbon footprint. A study by the French energy think-tank Negawatt, published in July, found that using five propane heaters to heat a roughly 800-square-foot patio from November to March emits as much CO2 as a car circling the Earth three times.

The Atmospheric Fund (TAF), a Toronto-based environmental non-profit, said that's equal to about 20 tonnes of carbon dioxide, a major greenhouse gas. "Any new or expanding use of fossil fuels is a concern and something to be mindful of in the age of climate change," said Bryan Purcell, TAF's vice-president of policy and programs.

While the figures may be surprising, Purcell noted that even a widespread increase in the use of propane heaters this winter would likely account for less than one per cent of Toronto's total annual emissions.

Purcell said businesses have a few options to maintain relatively comfortable winter patios while minimizing their carbon footprints. Installing windbreaks and using fabric furniture with greater insulating properties are options, he said, although perhaps the best investment a business can make is to choose electric heaters over propane versions. "An electric patio heater will cost a bit more up front but it's going to be cheaper to operate," Purcell said.