The latest on the coronavirus outbreak for Sept. 16

The latest on the coronavirus outbreak for Sept. 16.

Ontario Premier Doug Ford said he will be discussing the issue with his cabinet and will be talking with local mayors and medical officers before going ahead with the plan. "There's going to be severe, severe fines" for those who choose not to follow the guidelines, he said, noting that details could come as soon as Thursday.

Provincial health officials have attributed the spike in cases largely to people not following public health guidelines at social gatherings. Ford has promised to take action in the regions where most of the cases have emerged — Toronto, Peel and Ottawa. He has also not ruled out further lockdowns in those areas if virus case numbers aren't brought under control.

Ontario reported another 315 new cases of COVID-19 on Wednesday — more than half of which are in people under 40. In a series of tweets, Health Minister Christine Elliott said 64 per cent of Wednesday's cases were in that age bracket.

At a news conference Wednesday, Ford announced the launch of a new interactive screening tool for students, parents and staff to help gauge whether or not to attend school each day. Ford was also asked Wednesday about a photo making the rounds on social media showing him and other elected officials at MPP Stan Cho's wedding under a marquee tent, with some of the attendees not wearing masks. The premier maintained everyone present had their temperature taken and was wearing masks and that the photo in question was taken when people stood to welcome the bride and groom. 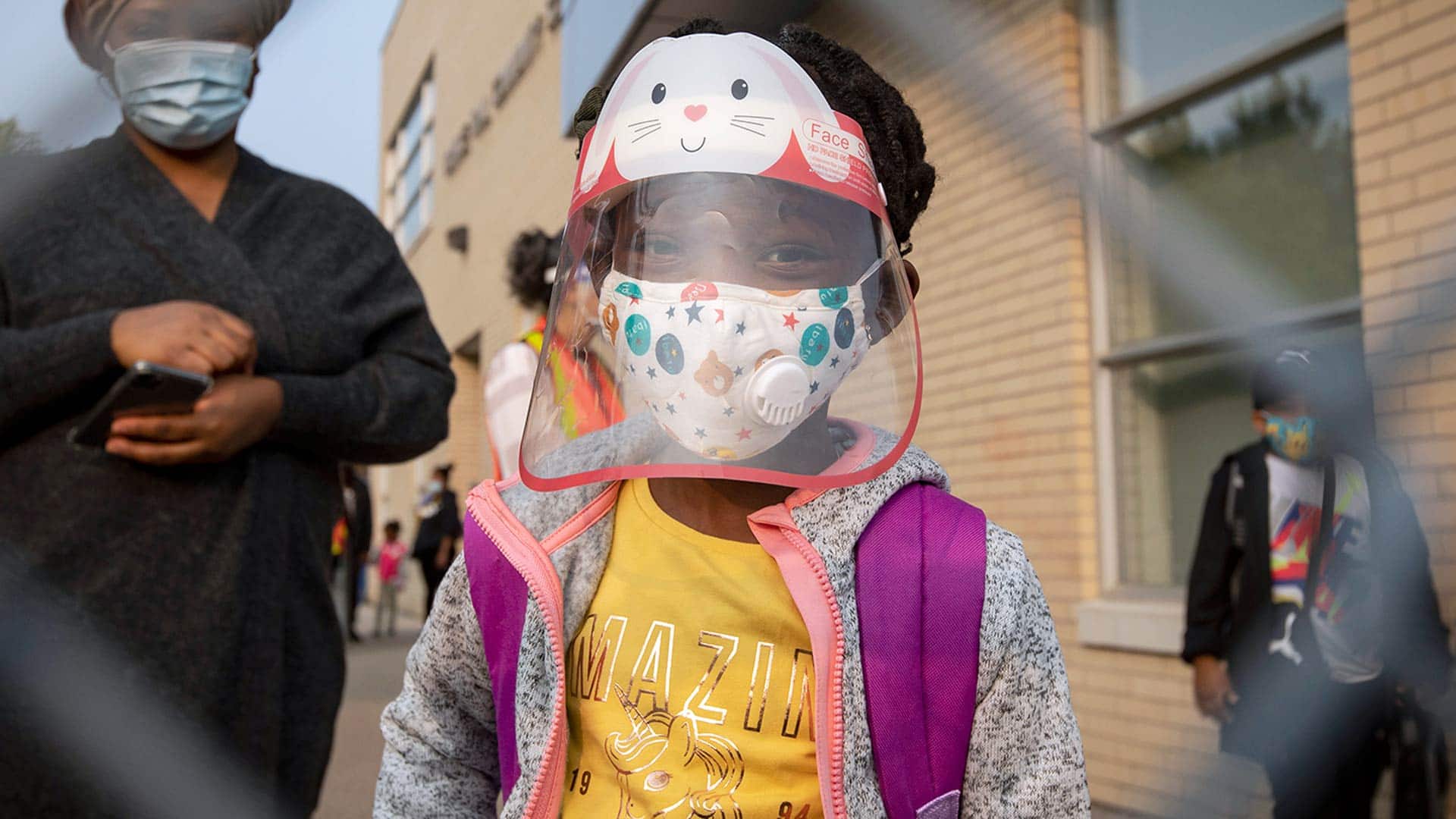 COVID-19: What to do with masks at recess?

6 months ago
7:13
An infectious diseases specialist and epidemiologist answer questions about COVID-19 and back to school, including what to do with masks during recess and whether reusable lunch kits should be avoided. 7:13

Conservative Party Leader Erin O'Toole and his family are being tested for COVID-19 on Wednesday after one of his staff members tested positive for the coronavirus. The staff member has been travelling with O'Toole. "While he hasn't shown symptoms, Mr. O'Toole and his family are being tested out of an abundance of caution. Other staff who were travelling with Mr. O'Toole are also being tested and will be self-isolating," reads a statement from the Conservatives. The statement said O'Toole's office is contacting everyone he's met with recently.

"My family and I are feeling well, but we take COVID-19 very seriously. Today was going to be Jack's first day back at school, but instead, we will be getting tested and self-isolating per public health guidelines. The health and safety of my family and all Canadians is my top priority," reads a statement from the Conservative leader.

Bloc Québécois Leader Yves-François Blanchet is isolating alongside his wife, Nancy Déziel, after she tested positive for COVID-19. A member of the Parliamentary Protective Service (PPS) also tested positive on Sept. 10.

The cases come as Parliament is set to resume next week. Health Minister Patty Hajdu said she hopes these cases lead MPs to consider virtual voting and a hybrid model for Parliament. "I think it's a very real concern, because, of course, the nature of our work means we come into contact with people who may be in contact with other people," she told a media scrum during a cabinet retreat in Ottawa on Wednesday.

The so-called Atlantic bubble meant to protect Atlantic Canadians from COVID-19 has so far been both successful and popular. The policy, enacted on July 3, sees open borders between Newfoundland and Labrador, Nova Scotia, Prince Edward Island and New Brunswick but strict conditions on people coming from elsewhere — namely, a mandatory 14-day self isolation period for anyone entering, or re-entering, the Atlantic region.

A recent poll indicates nearly 80 per cent of Atlantic Canadians support the bubble, although there has been constant worry and speculation since its creation that it might burst. The fact is, it is safer in the Atlantic provinces. As of Sept. 15, Ontario has recorded over 45,000 cases, with the Atlantic provinces recording only a little more than 1,600. British Columbia has about double the population of the Atlantic provinces but more than four times the number of confirmed cases. Quebec has recorded nearly 40 times the cases over the course of the pandemic, with only 3.6 times the population of the East Coast. New Zealand, which has been celebrated internationally for its ability to overcome COVID-19, has double the population of Atlantic Canada and dozens of active cases. Atlantic Canada has six, all of which are considered travel-related.

University of Ottawa law professor Errol Mendes says the pandemic means the bubble approach does not risk violating the constitution even though the Charter of Rights and Freedoms guarantees Canadians the right to move to and reside in any province. "It is my firm conviction that as long as the governments in the bubble can present cogent public health information and cogent scientific basis, and present the possibility of community spread from travellers from other parts of Canada, they can basically still keep the bubble being within the constitutional framework," Mendes said.

U.S. President Donald Trump denied during a televised town hall Tuesday that he had played down the threat of the coronavirus earlier this year, although there is an audio recording of him stating he did just that. Trump, in what could well be a preview of his performance in the presidential debates less than two weeks away, also cast doubt on the widely accepted scientific conclusions of his own administration that strongly urge the use of face coverings.

Taped at the National Constitution Center in Philadelphia, the town hall featured Trump taking questions from an audience of just 21 voters to comply with state and local coronavirus regulations. Face to face with everyday voters for the first time in months, Trump was pressed on his administration's response to the COVID-19 pandemic and why he doesn't more aggressively promote the use of masks to reduce the spread of the disease.

Trump asserted in the town hall that "there are a lot of people [who] think that masks are not good." When pressed by ABC News host George Stephanopoulos as to who he was referring to, Trump said "waiters." Trump sought to counter his admission to journalist Bob Woodward that he was deliberately "playing it down" when discussing the threat of COVID-19 to Americans earlier this year. Despite audio of his comments being released, Trump said, "Yeah, well, I didn't downplay it. I actually, in many ways, I up-played it, in terms of action."

Trump also suggested the virus would disappear without a vaccine, claiming the nation would develop a herd immunity with time, referring to it as "herd mentality." "It's going to be herd-developed, and that's going to happen. That will all happen," Trump said. "But with a vaccine, I think it will go away very quickly."

Younger Canadians spreading COVID-19 in all kinds of settings

There's lots of blame directed at big parties, but younger Canadians may also be fuelling the spread of COVID-19 in far more mundane ways — from family gatherings to cottage trips — with potentially dire consequences.

In Ontario, where the majority of new virus carriers are people under 40, Premier Doug Ford often points the finger at crowded parties, and multiple recent reports of cases have been tied to bustling indoor spaces such as strip clubs or wedding events. But emerging details from public health officials suggest a variety of social gatherings are helping SARS-CoV-2 find new hosts. They're getting infected at cottages, family gatherings, dinner parties — all kinds of indoor settings, and not always the ones with large, headline-making crowds. "The vast majority of transmission is with close contact with someone who's infected, typically, for a prolonged period of time in an indoor environment," said Dr. Isaac Bogoch, a Toronto-based infectious disease specialist.

"Personal gatherings are the main driver of cases," Dr. Mustafa Hirji, acting medical officer of health for Niagara Region, noted in a tweet the same day. One striking case study from Ottawa involved a 10-person cottage trip. It's a gathering size allowed by the province, as long as there's physical distancing in place, but according to the city's medical officer of health, Dr. Vera Etches, the trip wound up being a cautionary tale. "There was one person who developed cold-like symptoms while at the cottage party and then tested positive on their return home. Subsequently, seven of those friends tested positive for COVID-19," Etches recently told Ottawa's city council. "Within nine days, one person with symptoms became 40 confirmed people who tested positive."

The pandemic has made it clear just how broken the fashion industry is, says expert

The coronavirus pandemic has demonstrated just how broken the fashion industry is, says an expert who is calling for it to be "rewired" and to move away from fast fashion. The average person today is spending 60 per cent more money on clothing than they did 15 years ago and keeping them only half as long, according to a 2019 report by the McKinsey Global Fashion Index and The Business of Fashion, a fashion industry news organization.

"With that level of consumption, I think it's pretty clear that there's something wrong with the industry," Imran Amed, founder and editor in chief of The Business of Fashion, told CBC Radio's Matt Galloway on The Current. "I think that's been evident for some time. But, you know, as with so many things, the coronavirus pandemic has really just broken that open. It's kind of made it, you know, visible to everybody."

Since spring, major fashion retailers ,such as Reitmans, J. Crew and Brooks Brothers, have been crumbling under the financial impact of the pandemic. In May and June, a record number of Canadian companies sought creditor protection — a trend experts predict will continue.

Small, independent designers and shops in Canada have also taken a hit during the pandemic — something that's been hard for Vancouver designer Molly Spittal to watch. That's why the co-founder of denim brand Decade Studio has started offering responsible purchasing consultations, where she helps people find responsibly made versions of the fast fashion they're interested in buying. She defines a responsible purchase as one where the people who make the item are paid a living wage.

"I'd like everybody to sort of disengage with this feeling that you need to reinvent your wardrobe four times a year and really think about how far your money is going when you're buying a product that is not disposable, and is repairable and is recyclable," she told Galloway.