The latest on the coronavirus outbreak for Sept. 10

The latest on the coronavirus outbreak for Sept. 10.

A surprisingly high proportion of COVID-19 cases in Ontario have been among women working in health care, according to a new report that experts say intensifies calls for better protection. The report — co-authored by Dr. Astrid Guttmann, chief science officer at ICES, a not-for-profit research institute — follows a study that linked immigration and provincial health administrative data to look at patterns of COVID-19 testing from mid-January to mid-June among newcomers and their Canadian-born counterparts.

"I was surprised by the high proportion of positive cases, especially amongst women who were health-care workers," Guttmann said in an interview with CBC News. "It's very clear that the pandemic has taken a very heavy toll on this group of women." The researchers linked provincial COVID-19 test results from more than 624,000 individuals in Ontario to federal data on 2.6 million immigrants and 549,000 refugees who arrived from 1985 to 2017. Residents of long-term care homes were excluded, as were people who aren't eligible for provincial health coverage, such as asylum seekers awaiting refugee hearings.

Among all adult females in the study who tested positive for COVID-19, 36 per cent were employed as health-care workers. Of those, a further 45 per cent were immigrants and refugees, with those born in the Philippines, Jamaica and Nigeria accounting for the bulk of cases, the researchers reported on Wednesday. Many health-care workers who tested positive immigrated as paid caregivers, often coming to Canada as live-in nannies and transitioning to personal support work, Guttmann said. The findings, she said, should be a "call to action" to address systemic inequities.

"We have a scenario right now where the most vulnerable workers are providing the most essential services in the worst working conditions, and that's completely unacceptable," said Naomi Lightman, an assistant professor of sociology at the University of Calgary who researches inequalities among lower-wage workers in the health, education and domestic service sectors. She was not involved in the study, which she called damning and powerful in documenting disparities with empirical data.

Dr. Aisha Lofters, a family physician and researcher at Women's College Hospital in Toronto, said she was saddened but not surprised by the results. Factors such as living in a part of the province with higher rates of COVID-19 and in crowded housing compound the problems people can face, Lofters said. "Why is it the people who are racialized, people who are immigrants, are in this more vulnerable position?" Lofters said. "I would hope that people would recognize that it's not something biological and genetic, but that it's really about a system that we have created." 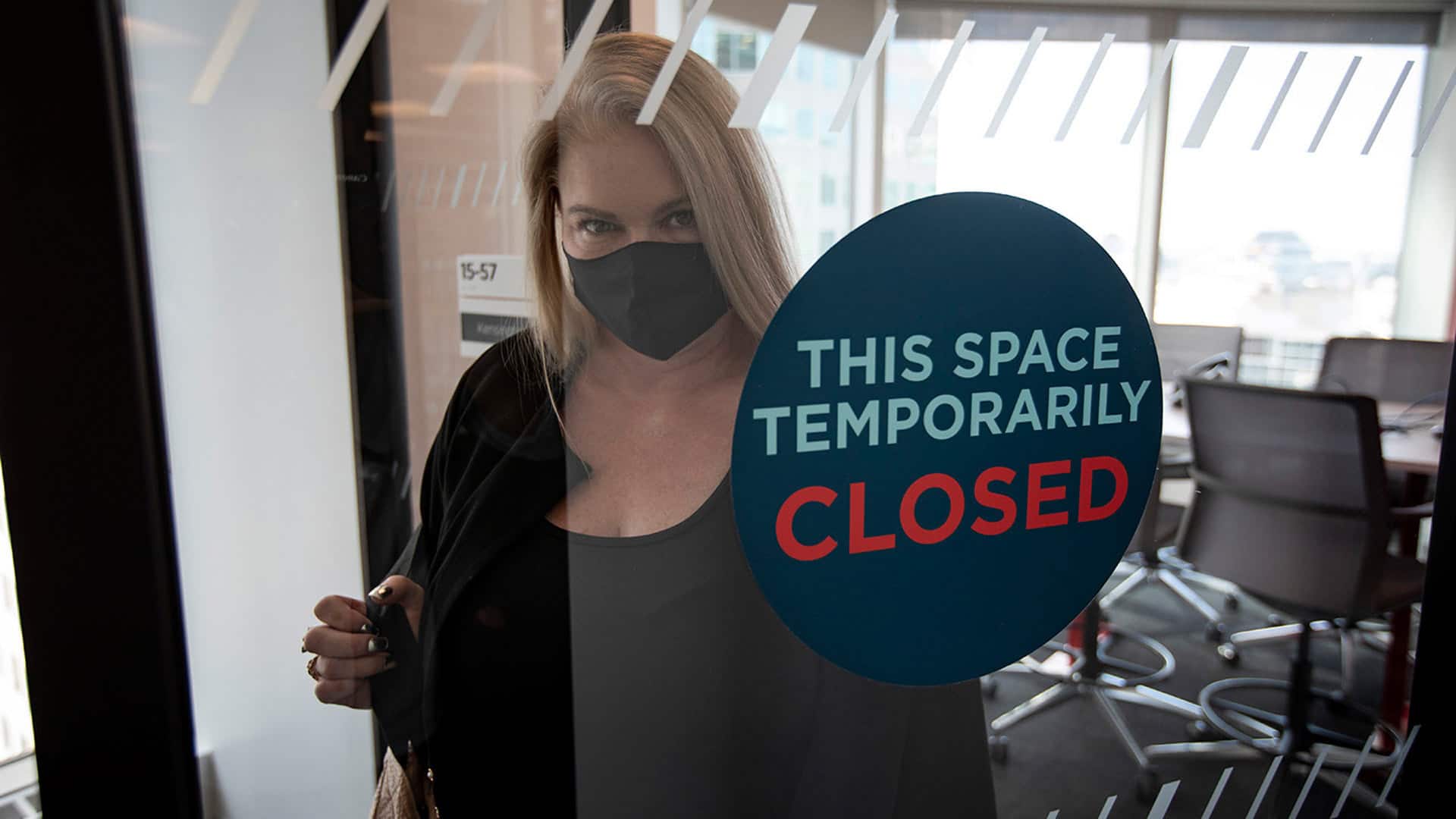 1 month ago
7:35
The COVID-19 pandemic has changed what workplaces look like. The communal areas and cluttered desks are gone, replaced with stark, sterile spaces and the rules being enforced by office spies. Is this what the future of work will look like even after COVID-19? 7:35
IN BRIEF

Quebec Premier François Legault says police will begin handing out fines to anyone who isn't wearing a mask when required according to public health guidelines. The fines will apply across the province, but Legault said authorities will target regions classified as "yellow" under the government's new colour-coded COVID-19 alert system. The new enforcement measures go into effect Saturday. People will be fined if they do not wear a mask in indoor public spaces where distancing is not possible.

While business owners already faced fines if they did not properly enforce the government's mask regulations, individuals faced no consequences if they refused to wear one until now. Legault said the government is implementing these stricter penalties because of a recent spike in cases. For several days in a row, the province has seen a seven-day moving average above 20 cases per million, a threshold the government has said it does not want to see crossed.

Fines are expected to range between $400 and $6,000, but the exact amount will only be confirmed when Deputy Premier Geneviève Guilbault provides more details on the fines in the coming days. While for the moment the fines are limited to those who don't wear masks, Health Minister Christian Dubé said the government will look at the possibility of imposing fines for failing to follow other public health recommendations, such as physical distancing.

The Toronto International Film Festival opened on Thursday with a vastly different format, CBC's Jackson Weaver reports. Festival participants acknowledge that various coronavirus adaptations the festival has made are vital, but it's still unclear how a largely virtual event will affect those who rely on it for networking opportunities and to jumpstart their careers.

TIFF took a different approach than the Venice Film Festival, which enforced health restrictions but was still held in person. Toronto's festival pushed the majority of showings online. The rest will be drive-in or outdoor showings, with a few select, physically distanced screenings in theatres. Organizers also culled the number of titles from more than 330 in 2019 to roughly 50 this year, and did not schedule red carpets or in-person talks. Moving the festival from the big screen to a computer screen poses more risks than just the energy of the audience. Drawing filmmakers and audience members from around the world to a single event generates excitement around top performers, and spreads word-of-mouth recommendations that help determine what the industry at large will anticipate.

"Toronto has a history of being a tastemaker," said Carlos Aguilar, a freelance film critic for the L.A. Times, Variety and other outlets. "Often the lucky films, they get the People's Choice Award or they get a lot of buzz, and then we're talking about them months later — sometimes in an Oscars capacity." That buzz is created organically, with momentum generated by crowds in a shared space and recommendations often swapped between strangers in line. That process will move largely to social media now, "strange waters that haven't been tested before," Aguilar said.

An American consumer advocacy group is accusing Amazon of price gouging on items such as soap, face masks and toilet paper in the early days of the COVID-19 pandemic, even as the e-commerce giant claimed to be cracking down on third-party sellers on its platform who were doing the same thing. A report by Washington, D.C.-based Public Citizen Thursday claims that Amazon hiked prices on many essential items in March and April, adding markups of up to 1,000 per cent on some basic items.

"Amazon has fundamentally misled the public, law enforcement and policymakers about price increases during the pandemic," said Alex Harman, the consumer policy advocate for the group, which tracked a sample of items to monitor their price and availability. Among the price changes the group said it observed were a pack of 50 disposable face masks increased by 1,000 per cent and a pack of eight 1,000-sheet toilet paper rolls increased by 528 per cent.

In a statement to CBC News, the company strongly refutes the claims and says it is in favour of legislation that would forbid price gouging in all forms. "There is no place for price gouging on Amazon and that includes products offered directly by Amazon," the company said. "Our systems are designed to offer customers the best available online price and if we see an error, we work quickly to fix it.

How worried should we be about the pause in one late-stage COVID-19 vaccine trial?

A front-running team in the race to develop a COVID-19 vaccine has put its late-stage trial on hold after a reported "unexplained illness" in one of the trial volunteers. It was a Phase 3 clinical trial, the last and largest stage of human testing, for a vaccine being developed by the University of Oxford and pharmaceutical company AstraZeneca.

If it turns out that this is a potential adverse effect of this vaccine, "that would obviously be a substantial showstopper for this vaccine," said Dr. Andrew Morris, an infectious disease specialist at Sinai Health, the University Health Network and the University of Toronto.

He's concerned there wouldn't be access to the vaccine, which is in advanced stages of development. It's also one that many countries are pinning their hopes on, with substantial investment from and billions of doses reserved by governments around the world and by the COVAX Facility, which aims to provide access to 172 countries. Morris said he's also concerned that the media coverage will discourage people from enrolling in vaccine studies or increase anti-vaccination hype.

But Dr. Michael Gardam, an infectious disease specialist at Women's College Hospital in Toronto, said the pause should ease people's concerns, as it shows that the system is working and highlights the importance of Phase 3 clinical trials to ensure the safety of vaccines. "This in and of itself isn't a big deal," he said. "This is what is supposed to happen.... This gives me some comfort. The fact that this has been stopped appropriately, it'll be investigated. We'll learn about it and then presumably the trial will start up again. That's exactly what's supposed to happen." Read CBC's full explainer about the pause here.

Michael Carroll has worked some long days standing behind a camera during his career of more than 30 years in the television business, but working inside the NHL's bubble at Rogers Place in Edmonton for 42 days straight was a first. "There were quite a few days of three games a day," said Carroll, who left the bubble on Saturday after working 63 games. Crews were cut down over the weekend now that there's only one playoff game being played per day.

While the long hours and frigid temperatures were a physical test, being away from loved ones was equally challenging, he said. Carroll did get a chance to stay connected with his wife through FaceTime and meeting from a distance when she came to the hotel. While Carroll didn't get to leave the bubble when he was working, others do, such as Craig Boa.

He owns Weekly Trim True, located in the Mercer Warehouse building across the street from Rogers Place. He was chosen by the NHL two weeks ago to cut hair for people inside the bubble. "The NHL runs a pretty tight game about people going into the bubble and infiltrating," said Boa, who said he went through a thorough vetting process before being selected. He gets tested and has his temperature checked each time he enters, and says the bubble experience has been unique. "My mom wouldn't even recognize me — full hazmat suit, mask, shield, gloves, surgical gown, sanitizer. It's pretty serious in there, for sure. I've been doing this for 12,13 years; I've never cut in a hazmat suit with gloves on, but a couple cuts in and you get the hang of it."