CBC tracked down some truly exceptional students graduating from high schools across the country this month who are making a difference in their communities. Here are their stories.

The world's attention was on high school students from Florida this year, as they pushed their message of gun reform to the U.S. capitol. But Canada's graduating class of 2018 also has some impressive young people working toward the future they want to see.

As school winds down on this side of the border, we tracked down three determined Grade 12 students who have overcome extraordinary odds and are working to make Canada a better place.

It was on his fifteenth birthday in December 2015 that Alex McEwan lost the ability to walk.

What began as a fun day tobogganing with friends near his Calgary home ended in a life-changing accident. Alex's sled spun out and hit a pole, crushing his spine and paralyzing him from the chest down.

It's the kind of split-second, 180-degree change that could destroy a person. But not Alex.

Just days later, while still in hospital, Alex told his principal he suspected the accident had happened to him for a reason. He said to her, "I just need to find out what that reason is."

Determined to come up with an answer, Alex returned to school a few months later, having kept up his studies while he was in care.

Just three weeks out of the hospital and still getting used to his wheelchair, he began hunting for a part-time job. He eventually landed work as a cashier at a local grocer in his community of Bowness.

In the two years since his injury, he has raised money for spinal cord research and donated time to helping others cope with similar injuries.

"A lot of the times I talk to them about the bad days," he says, "because no one's saying you have to have an amazing day every single day. But when you have those bad days you can't let them define your life."

... when you have those bad days you can't let them define your life.- Alex McEwan

Alex can no longer play the sports he enjoyed before his injury. But he is learning new skills, taking up sledge hockey and wheelchair basketball, among other activities.

But his final days at Bowness High School have included one of his biggest achievements yet.

After months of planning, he was able to surprise his teachers and fellow students at his graduation ceremony by walking across the stage with the help of an advanced machine known as an exoskeleton, borrowed for the day from Alberta Health Services.

Standing upright with the help of this electric-powered metal skeleton, Alex walked across the stage as if he'd never injured his spinal cord.

While his fellow students cheered, Alex stood at his full height for the first time in two years. As he describes it, it was a "huge moment" both for him and the community that has supported him. 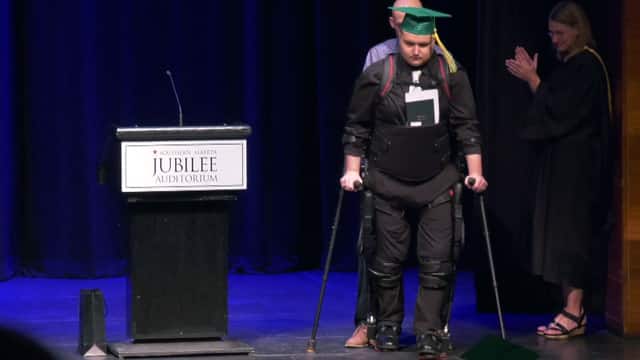 3 years ago
1:21
On his fifteenth birthday in December 2015, Calgary's Alex McEwan was injured in a tobogganing accident with friends and lost the ability to walk. It’s the kind of change that could destroy a person, but Alex has thrived and is learning new skills. Watch him walk onstage, with some help from a powered exoskeleton, to receive his diploma. 1:21

After living through the horrors and hardship of war in both Iraq and Syria, some people might simply fall apart.

She has pushed beyond trauma and language barriers to become one of the most involved students at her high school in Regina, volunteering for special events as well as helping at the local children's hospital and Humane Society.

"I thank God every day, because he gave me this life," she says, perched on the front steps of her comfortable family home.

For most of her childhood, it was hard to believe she could come this far.

Seeking to escape death threats at home in Iraq, she and her family originally fled to Syria in 2007. They applied to leave Syria for a safer country as soon as they arrived. But for years, she says, her mother anxiously watched the phone, waiting for the call that could change their fortunes.

Finally, they heard they'd been accepted by a country they knew little about: Canada.

She smiles broadly as she describes landing in Toronto in 2014. "It was a really huge turning point in my life," she says.

A dream stays a dream, right? This is my goal.- Saja  Al-Baldawi

Now settled in Regina and finally used to the prairie winters, Saja has shared some of her stories of war with fellow students and teachers. They've told her they're surprised that such a seemingly happy person could have been through so much.

Indeed, while the memories of her past are hard for Saja to think about, she hasn't stopped moving forward.

Despite being placed a few years behind her age group in school, Saja has excelled, earning near-perfect marks as well as a scholarship for university next year. She has volunteered with new immigrants in the community as well as with the local children's hospital.

Saja is focused on becoming a doctor, a plan she refuses to call a "dream." 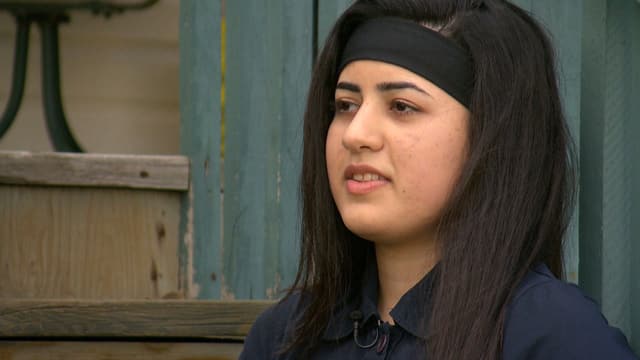 3 years ago
0:44
After living through the horrors and hardship of war in both Iraq and Syria, 20-year-old Saja Al-Baldawi has pushed beyond trauma and language barriers to become one of the most involved students at her high school in her new home, Regina. She tells CBC's David Common what motivates her. 0:44

Kardeisha Provo, 18, wasn't happy with the way her community was being portrayed in the news.

"It's an all-black community, and often in the world black people are labelled as being violent," she says.

North Preston is a Halifax neighbourhood that has been characterized as having a bad reputation.

Kardeisha sums up the problems in her community in this video clip: 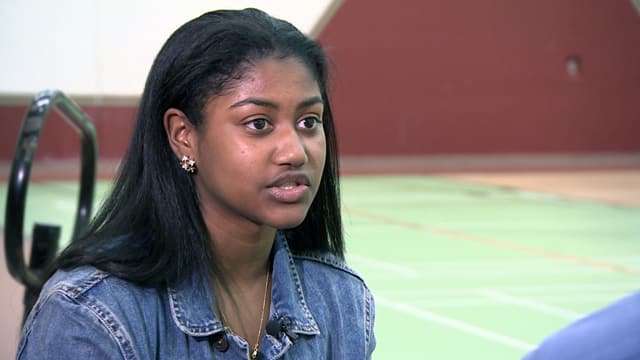 3 years ago
0:46
Kardeisha Provo, 18, wasn’t happy with the way her Halifax community of North Preston was being portrayed in the news, so she decided to change the narrative and start telling the neighbourhood's positive stories. 0:46

But she loves her home, which has a rich, centuries-old history rooted in the underground railroad.

Two years ago, Kardeisha decided to start pushing back against the stereotypes that have dogged her neighbourhood. She began making video blogs and posting them to a YouTube channel, highlighting her experience living in North Preston.

Her videos often feature members of her close-knit family, but she has also taken on local issues, such as the firing of a beloved teacher. And she even interviewed Canadian NBA star Andrew Wiggins when he was in town for a basketball camp.

Mostly, her video blog entries paint a happier, home-grown portrait of a place that for too long has been negatively portrayed by outsiders.

The point, she says, is to rewrite the local narrative "and spread a positive light on the successes of our people."

Spend any amount of time with Kardeisha and it becomes clear she herself is a local success story. At her school, which is outside of her community, she has earned good marks and is a member of the student council.

But it's at home in North Preston where her achievements are most visible.

It seems she gets a wave from every passing driver as she walks through her neighbourhood. At the local community centre where she has spent much of her youth, a much younger Kardeisha is pictured on a poster for local events, and employees greet her with a hug.

As Kardeisha gets ready to move to Toronto for university, she has been holding workshops to pass on her video skills to others in her neighbourhood.

The hope is that they will continue telling their own stories and providing a voice for a community she believes has so much to share.

WATCH: David Common's feature from The National on the exceptional graduates of Canada's class of 2018 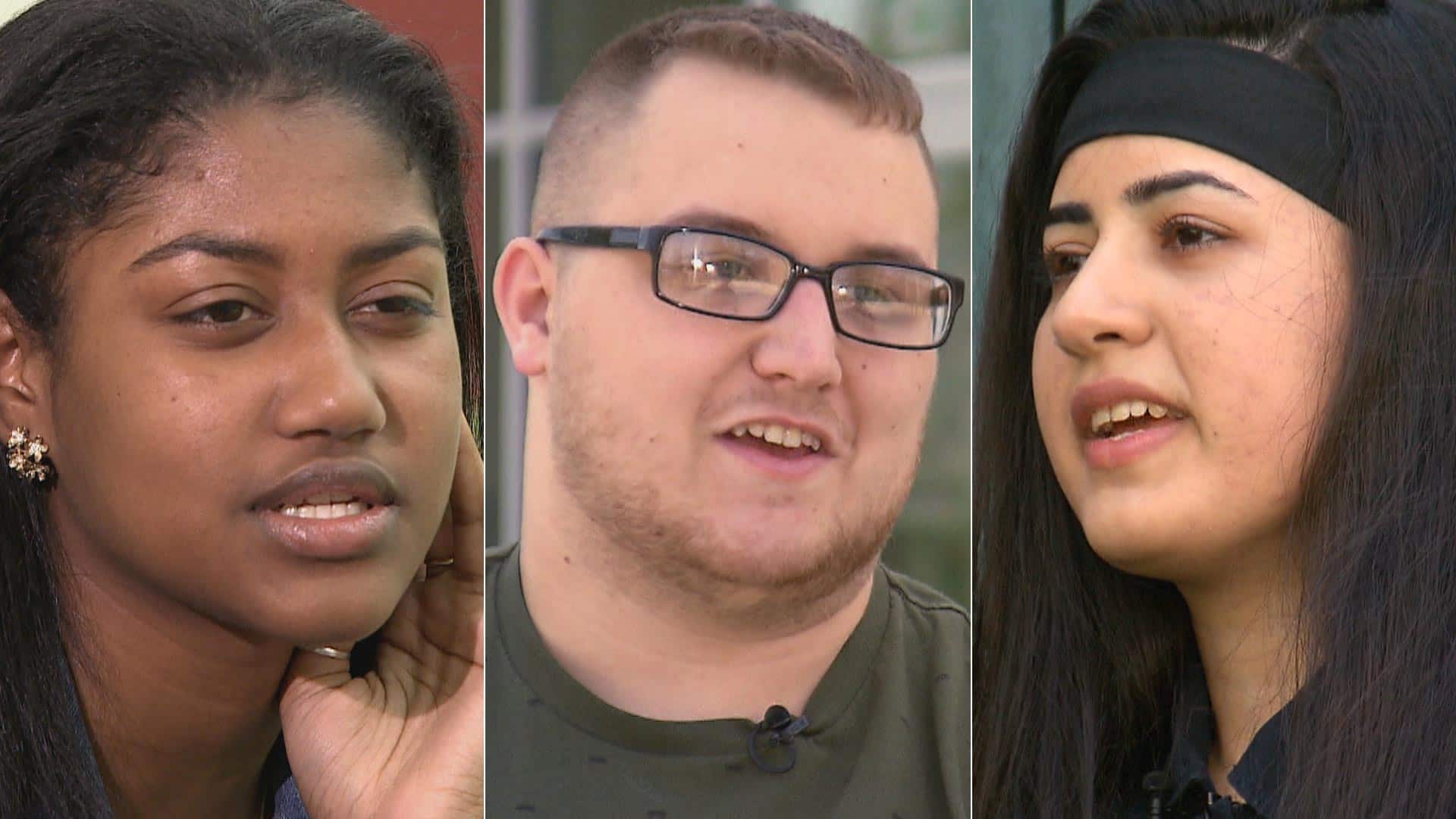 The inspiring journeys of 3 Canadian teenagers

3 years ago
9:51
The National shares the inspiring journeys of three Canadian teenagers who have all experienced hardship, but are using their challenges to bring about change in their communities. 9:51

With files from David Common