Canadians should be aware of the possible risks from a widely used mechanical process to tenderize steaks and roasts, a U.S. food safety advocate says.

Labelling for mechanically tenderized meat may come to Canada 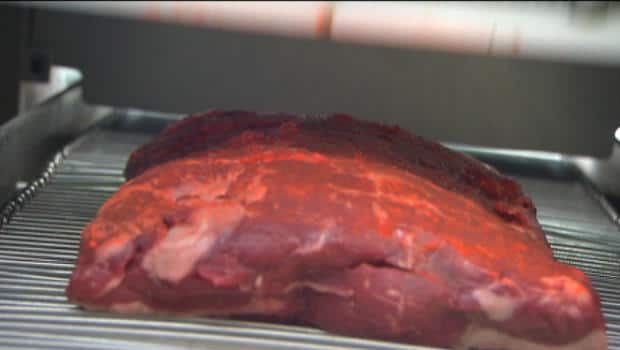 8 years ago
2:32
New labels are being recommended to indicate whether meat has been mechanically tenderized, a process involved in some of the recalled XL Foods meat 2:32

Canadians should be aware of the possible risks from a widely used mechanical process to tenderize steaks and roasts, a U.S. food safety advocate says.

Food safety concerns made headlines in late September after a recall of beef products processed at an XL Foods plant in Brooks, Alta. At least 16 people were sickened by meat contaminated with E. coli O157:H7. The Public Health Agency said evidence suggested some of the illness seemed to be caused by tenderized meat.

On Tuesday, the Canadian Food Inspection Agency issued a release saying that it had lifted the suspension on the licence of the XL plant in Brooks, Alta. The plant is expected to operate with more surveillance and enhanced testing protocols.

It's not clear if XL used meat tenderization in its processing, but Alberta Health Services has previously suggested that tenderization of steaks at Costco stores in Alberta may have factored in the E. coli illnesses.

Mechanical meat tenderizers use needles and blades to penetrate steak and roasts. Health Canada says the process of mechanically tenderizing meat is a "very common practice" that is used by suppliers, retailers and restaurants "to improve the tenderness and flavour of cooked beef."

The process can also drive E. coli on the surface of the meat into the centre, making it harder to kill during cooking, CBC's Marketplace found during a recent test.

Barbara Kowalcyk, founder of the U.S-based Center for Foodborne Illness Research, says consumers "need to know that this product has been mechanically tenderized and that it should be handled appropriately, and that means cooked to a higher temperature."

Kowalcyk started the U.S. centre after her son was infected with E. coli a decade ago. He went through dialysis and was put on a ventilator, but never recovered.

"And so, our beautiful child died at age 2½ of an illness a week and a half before that I didn't even know existed," Kowalcyk said.

E. coli can be pushed into meat

Marketplace worked with Rick Holley, a food scientist and microbiologist at the University of Manitoba, to see how the mechanical tenderization process works and what potential risks might exist.

Holley said up to two per cent of meat cuts, steaks in particular, can carry the organism on the surface.

In a test, Holley spread E. coli O157:H7 that he grew in a lab on a piece of beef. The meat was then run through the machines to see what happened to the bacteria on the surface.

In that instance, Holley found that 10 per cent of the bacteria from the surface was forced into the centre of the meat.

An earlier test using a gel visible under ultraviolet light also found that the material on the surface of the meat doesn't only contaminate the meat – it can also spread to the needles or blades on a tenderizing machine. Holley said it can be "almost impossible" to properly clean the machines, which can then spread E. coli to other pieces of meat that are tenderized.

Typically, hamburger causes beef-related E. coli cases in Canada, Holley says, but cases in which some people got sick from steak should serve as a wakeup call.

It's not clear exactly how much meat processed in Canada goes through mechanical tenderization, but the Public Health Agency of Canada says in a study it could be between 20 to 50 per cent.

It's difficult to tell which meat products have been tenderized, because after the meat has been treated the tiny holes seal up and disappear.

Kowalcyk's group has lobbied U.S. legislators for a regulation requiring tenderized meat to say so on the label. It could become law soon.

Labels could come to Canada

This labelling requirement could be coming to Canada.

CBC's Marketplace visited 16 stores in five Canadian cities, asking staff if the meat for sale in the store had been mechanically tenderized.

Clear answers were hard to come by, with many employees saying they were unsure whether steaks and roasts had been tenderized, Marketplace found.

In all, five stores said they didn't know if their beef was tenderized, two said they use the process and the rest said they don't.

A council that represents major retailers is talking to Health Canada about the possibility of adding labels indicating beef has been mechanically tenderized.

Health Canada responded with an email on Oct. 15, saying, "We are currently reviewing the science around the mechanical tenderization of meat and will advise Canadians as soon as we have determined if any changes should be made to our recommendations."

Two days later, the Retail Council of Canada told Marketplace that it is working with Health Canada and will have something in place to alert consumers in the near future.

David Wilkes, vice-president of the council's grocery division, said that labels are "one of the options that we're going to be looking at."

Holley said that the recent E. coli outbreak is just another symptom of a continuing problem. "Clearly, what we are seeing represents a failure, again, in the system," he said. "And if things don't change, we can expect to see this in the future."