The federal government has spent more than $37 million to cover the cost of housing travellers returning to Canada who lack a safe place to quarantine for 14 days. Eleven hotel sites have been set up across the country, each with its own health-care staff and security.

More than 3,000 returning travellers have been quarantined at taxpayers' expense

It was just after midnight on April 17 when Jeff Geauvreau landed at Pearson International Airport in Toronto after a long journey from Peru, a country hit hard by COVID-19.

He told border officials at the airport that he was returning to Canada after nearly 10 years abroad and had no safe place to complete the mandatory two-week quarantine. He had planned to stay with his elderly father, who would have been at risk of contracting the novel coronavirus.

After a brief interview with public health officials, he was told to board a shuttle bus and was driven to a federal quarantine facility about 10 minutes away.

Geauvreau is one of more than 3,000 returning travellers who have spent the two-week quarantine period at a hotel paid for by the federal government, according to the Public Health Agency of Canada (PHAC).

"Hopefully, it wasn't going to be, you know, barracks," Geauvreau recalled thinking at the time. "I didn't know what to expect."

The quarantine facility turned out to be a "very nice" hotel, he said.

Geauvreau said he was examined by nurses and then accompanied to his room, which was a suite complete with bedroom, living room, bathroom and two televisions. It's not clear if his room was typical of the kind of accommodation provided to returning travellers.

As of Aug. 16, 3,222 people had been put up at hotels paid for by the government. By the end of July, the cost of providing the quarantine sites had exceeded $37 million, the PHAC said.

"Quarantine facilities are used to lodge persons entering Canada who are unable to isolate or quarantine because they are unable to meet the conditions of the mandatory isolation order (e.g., live with a vulnerable person, do not have private transportation if they are symptomatic)," Public Health Agency of Canada spokesperson Geoffroy Legault-Thivierge said in a statement.

The agency did not give a detailed breakdown of the costs but said they include accommodation, meals, transport, health checks and security. Some quarantine sites have a nurse practitioner on site 24/7.

There are 11 federal quarantine sites across the country and another two run jointly by federal and provincial governments. The 11 federal sites can house a total of 1,500 people, Legault-Thivierge said.

The rooms are available only as a last resort, PHAC spokesperson Tammy Jarbeau said in a statement.

"We expect that most travellers will quarantine in their own home or in the same place they are visiting in Canada," she said.

"If this is not possible, travellers are responsible for making alternative arrangements for quarantine accommodations that are within their own financial means."

Before admitting anyone into a quarantine facility,  government representatives work with them to ensure "all other options ... within their own means have been exhausted," Jarbeau said.

The federal government reserved the hotel rooms soon after issuing a public health order on March 25 requiring a 14-day quarantine period for travellers returning to Canada.

Travellers interviewed by CBC News who stayed in the hotels said they were typically mid-range hotels located near airports.

Hotel Association of Canada president and CEO Susie Grynol said the group worked with Ottawa to secure a small number of hotels close to international airports to allow people to quarantine.

"We were proud to support public health in their efforts to flatten the curve, but it was not a profit-generating exercise," she said in an emailed statement to CBC News. "At that point, most hotels were virtually closed down."

The government will not reveal which hotels are being used as quarantine facilities to protect the privacy and security of those staying there, the PHAC said in a statement.

Food, essentials brought to the door

Vijayendra Yalavarthi, who arrived in Toronto from India in June under the federal skilled worker program, said he was taken to the hotel in an ambulance after telling border officials that his Airbnb rental had fallen through.

Both he and Geauvreau said they stayed in suites.

Food was left outside the room three times a day.

WATCH | Ottawa has spent $37M on quarantine hotels in Canada: 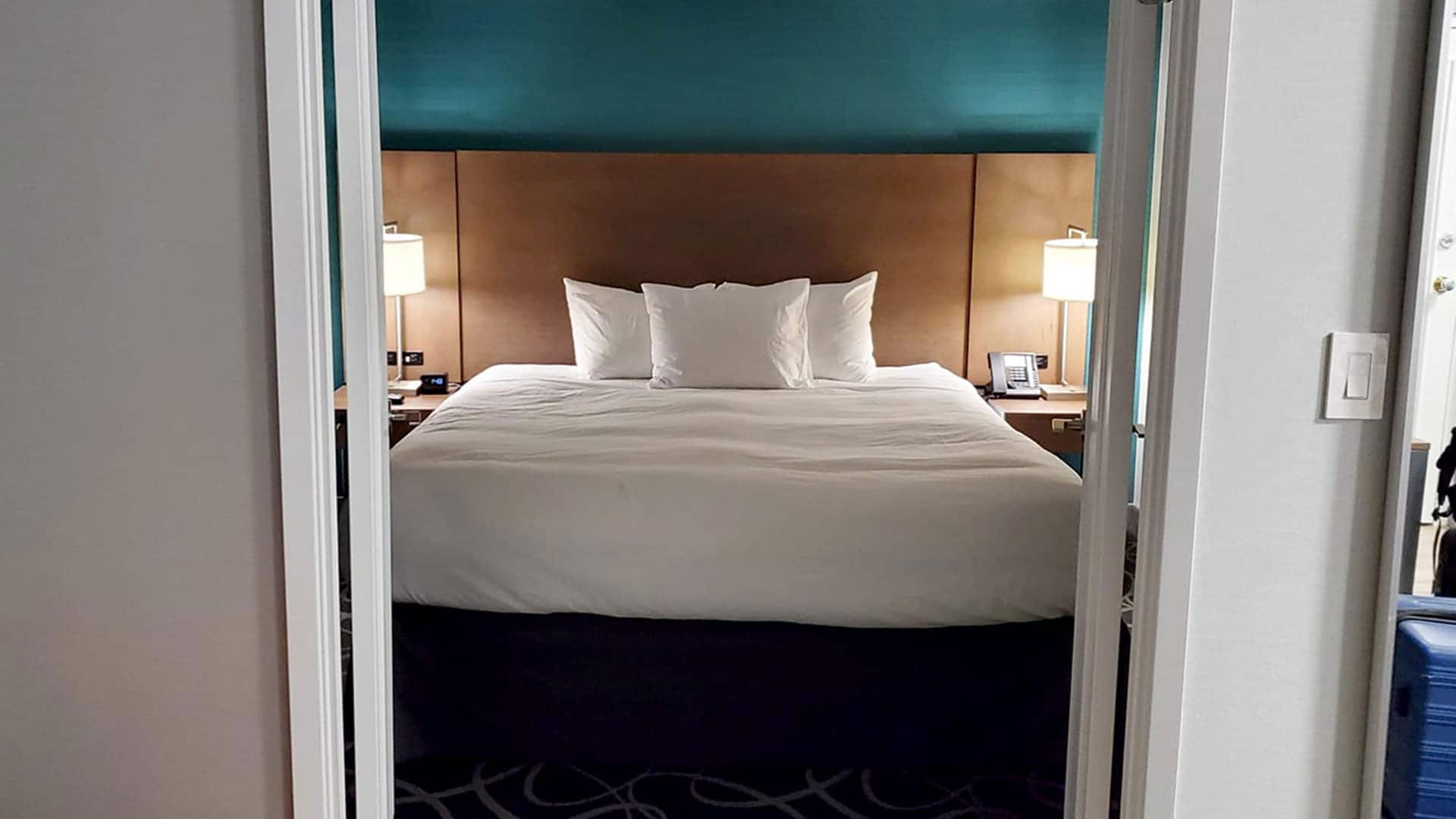 Ottawa has spent $37M on quarantine hotels in Canada

6 months ago
2:00
CBC News has learned the federal government has already spent at least $37 million to cover hotel stays and meals for more than 3,000 people arriving in Canada who can't safely isolate at home. 2:00

"The dinner portion is really good," Yalavarthi said. "They used to experiment a lot. They give you ... like, rice with Indian recipes like paneer or curry. They ... try it, and it's really good, actually."

Family and friends were not allowed to visit the hotel, but the Canadian Red Cross would call once a day, Geauvreau said.

"They'd see if you needed anything.... [My] USB cables were broken, so I got some USB cables," he said. "I think I got some powdered drink mix, and [they] dropped me off a book.... If you needed emergency socks or underwear or a shirt or something, they would get it for you."

There were health checks twice a day, during which nurses would stand outside the room, take his temperature and ask a series of questions, Geauvreau said. If anyone showed symptoms during one of these checks, they were moved to a lower floor of the hotel.

Cleaners in HAZMAT suits would wipe down surfaces in the room once a day, he said.

'You're not leaving that room'

Initially, Geauvreau said, it was nice to have a quiet room where he could rest and recover from the long journey.

But after a few days, the suite started to feel small and confined. And he couldn't leave because he didn't have a key card.

"You're not leaving that room. And once you enter the facility, when you sign [in] downstairs, you have no rights to leave, under no circumstances," he said. "They can arrest anybody that tries to leave."

One man "was kind of going stir crazy" and had to be subdued by security guards when he became loud and aggressive in a hotel corridor, Geauvreau said.

Yalavarthi, who arrived as a permanent resident from India, stayed at the same hotel two months later.

"The first few days, I felt like I was being jailed," he said.

The IT professional said he was allowed to go outside to a designated walking area in a parking lot, but only while accompanied by security.

Both Geauvreau and Yalavarthi said they learned about the federal quarantine sites through online networks of people coming to Canada from abroad.

There is no official government website that includes details, so Yalavarthi kept it as a backup option, only opting to use the option when his Airbnb reservations fell through.

CBC News interviewed several other travellers who expressed frustration that there were no details about the hotels available online.

Yalavarthi made a YouTube video documenting his experience to let others know about the option.

Overall, he said he is grateful for the experience and the measures the Canadian government is taking to prevent the spread of COVID-19.

"I would really thank them," he said.

Yalavarthi said when a family member in India got COVID-19, he did not feel well supported by the Indian government. "But here in Canada, even [if] I don't have COVID symptoms, they're ready to help me."

As a recently arrived immigrant, Yalavarthi said the experience made him feel welcome in Canada and well taken care of. The experience has motivated him to give back, he said, and happy to pay his taxes to the government to help cover the costs.

"If you welcome someone, they will try to help you in future. That's what I believe."