Canada is seeking an exemption from the new Buy American provisions in U.S. President Barack Obama's proposed jobs act, weeks before the exemption for the previous stimulus is set to expire. 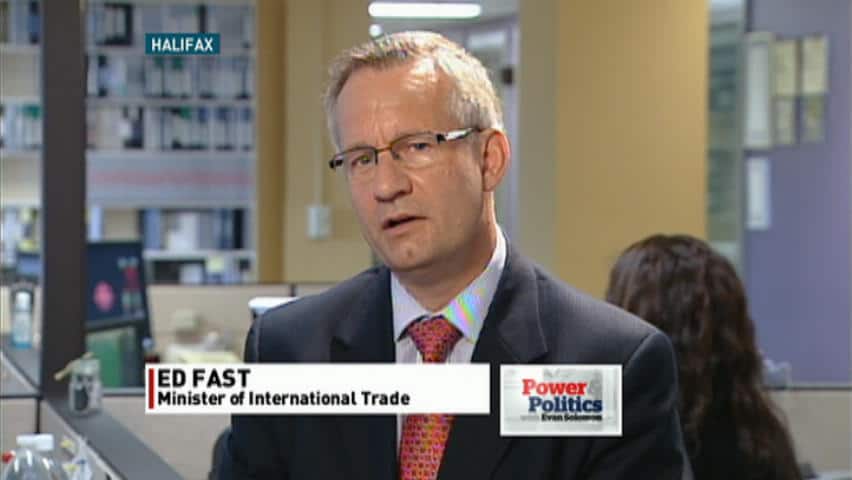 Canada is seeking an exemption from the new Buy American provisions in U.S. President Barack Obama's proposed jobs act, weeks before the exemption for the previous stimulus is set to expire.

Minister of International Trade Ed Fast, citing concerns over a potential "trade barrier initiative," has launched a round of consultations with Washington to negotiate an extension for a Canadian exemption before a Sept. 30 deadline.

Obama's proposed $447-billion US American Jobs Act is intended to give a much-needed jolt to a stalled U.S. economy, but in an interview with Evan Solomon on CBC's Power & Politics Wednesday, Fast characterized the bill as misguided.

"We believe that protectionism is counterproductive, especially during these difficult economic times around the world," the minister said, adding that 75 per cent of Canada's trade is with the U.S.

The measures contained in the bill echo Washington's original stimulus package in 2009 — a fight that Canada thought it had already won.

"I do know the last time this happened, which was back in 2009, we engaged with our American counterparts, and we were able to resolve the issue, at least on a temporary basis. Now we're back at the same place where we're now it's a new stimulus package that the U.S. has introduced," Fast said.

The minister said he was "very surprised and certainly disappointed" to learn of the provisions, adding that Canada is working "very aggressively" to raise the same arguments made two years ago with the Obama administration and to Congress.

The offending passage in the act is contained in Section 4, headed "Buy American — Use of American Iron, Steel and Manufactured Goods."

P.O.V.: Should Canada be exempt from the Buy American clause?

The section contains a directive that none of the funds made available under the American Jobs Act may be used for "the construction, alteration, maintenance, or repair of a public building or public work unless all of the iron, steel and manufactured goods used in the project are produced in the United States."

The "Buy American" section also notes that it "shall be applied in a manner consistent with United States obligations under international agreements," which offers Canadian businesses some protection under the North American Free Trade Agreement. But NAFTA doesn't apply to municipal contracts, and the bulk of spending in both the previous U.S. stimulus plan and Obama's proposed jobs plan is at the municipal level.

The bill calls for more than US$100 billion towards the renovation of schools, the construction of roads and bridges and improving transit.

Canada is now asking for an extension for the previous NAFTA deal extending to sub-national governments, which is set to expire at the end of this month.

Ottawa is concerned about a "chill effect" that could take place as a result of the Buy American provision, as it has been noted that just because states and municipalities might be allowed to buy Canadian doesn't necessarily mean they will.

Even if the NAFTA agreement is renewed beyond Sept. 30, Canadian suppliers might worry they will still be frozen out by U.S. contractors, the CBC's Hannah Thibodeau reported from Ottawa.

"They have this box they tick that says, 'Buy American,' they tick that off and if they don't know and look at the fine print of any of these deals, then they won't know that Canada is exempt," she said.

Jayson Myers, the president of Canadian Manufacturers & Exporters, the country's largest industry and trade association, said the concern is that business owners in the U.S. may find the deal "tremendously confusing" if they don't understand Canadian companies can be included in bidding processes.

"But the bigger impact here is not just the direct opportunity that's lost for Canadian exporters; this has a chill right through the supply chain," Meyers told CBC News on Wednesday, noting that distributors may not be able to distinguish between what would be considered foreign, Canadian or U.S. goods.