A 17-year-old Calgary girl who turned to art to help pull her through her battle with cancer is now inspiring a Canadian Olympian.

Calgarian Gillian O'Blenes sends off skier with a doodle-designed helmet 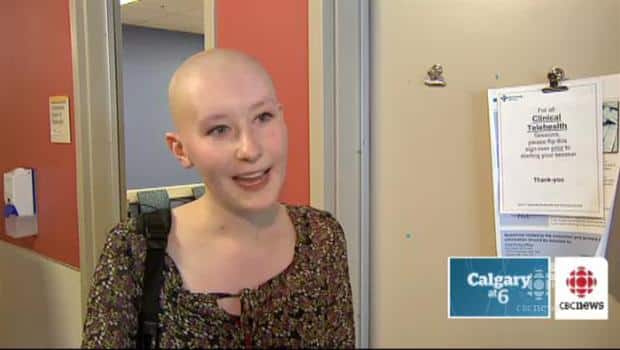 7 years ago
2:10
A 17-year-old Calgary girl who turned to art to help pull her through her battle with cancer is now inspiring a Canadian Olympian. 2:10

A 17-year-old Calgary girl who turned to art to help pull her through her battle with cancer is now inspiring a Canadian Olympian.

Gillian O'Blenes was diagnosed with bone cancer, or osteosarcoma, last May. During the young dancer's treatment she was introduced to Brad Spence, a Sochi-bound skier who broke his leg just before the 2006 Olympic Winter Games in Turin.

"After I broke my leg, I had all sorts of nerve damage that I couldn't actually move my toes for a while," said Spence. "So I'd go into physio every single day and I would sit down in a chair and I would try to figure out how to use my toes to pick up  a piece of Kleenex."

Since Spence met O'Blenes last year, the two have been exchanging stories similar to that. It was during one of his regular visits to the hospital to see O'Blenes that the skier caught the 17-year-old girl doing something "amazing."

"She was sitting there with a pen in her hand and what started as a blank piece of paper and she was just doodling," said Spence.

In between treatment, surgeries and chemotherapy, O'Blenes says she turned to art as a way to distract her. The teen has always been artistic, so nurses at the Alberta Children's Hospital encouraged her to try "zen doodling."

"The thing with zen doodling is that it's mostly just from my head. I don't plan it out. I don't try and make any sketches beforehand I just go with it," said O'Blenes.

So inspired by her doodles,Spence commissioned O'Blenes in December to create something special for his trip to Sochi — a helmet with a one-of-a-kind design.

"Makes me feel like I'm a part of something pretty special and that I will get back on stage one day, like you got back on the hill," O'Blenes said to Spence as she presented him with her creation.

O'Blenes said the design took nearly six hours. She would chip away at the design while she was in hospital.

Spence said the teen has given him more than just a helmet.

"There are a lot of days in my career when I question giving up. This year, I've battled some injuries as well and that looming thought in the back of my mind always helped me believe that I could do it having known her and seeing what she's done. She's been a huge inspiration to me and I'm just so honoured to have this opportunity."