They are yellow, through and through, and make Calgary drivers better. Oh yeah, they were also invented here. 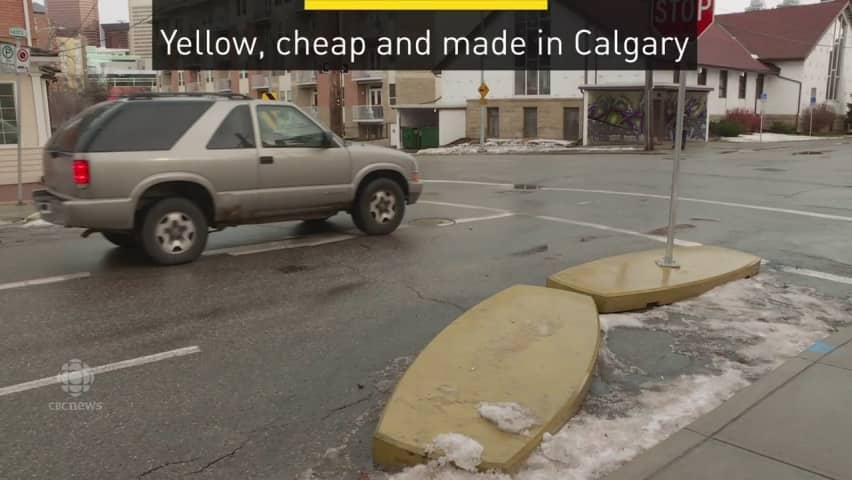 They are yellow, through and through, and make Calgary drivers better. Oh yeah, they were also invented here.

Those yellow, concrete, traffic calming curbs, which started to appear in select Calgary communities last year, are getting the city's traffic safety guy all excited.

"Speed compliance went up by 17 per cent, speeds reduced by three kilometres an hour on a very large sample size," he explained, of a trial in the southeast community of Erin Woods.

"That doesn't seem like much, but when you look at safety outcomes, it's really good. Yielding compliance went up from 43 per cent to 90 per cent — that's yielding to pedestrians. Really significant changes. We have seen similar improvements for stop conditions where we put in median stop islands and narrowed down that approach to a stop."

The bright yellow, concrete blocks can be used as medians, curb extensions and sometimes to create detours in traffic circles.

"We invented and developed them in Calgary, and we have local precast contractors that cast them, and then we take them out to the site and place them," Churchill said.

Fraction of the cost

They are much cheaper than traditional traffic calming installations.

"If we are just putting something on top of the road and maintaining existing drainage, don't have to dig into the road, we can do it for about one-tenth of the cost."

Churchill says they don't have to be yellow, but when they aren't, "we always get complaints it looks ugly and unsightly. Maybe because it's a common traffic colour, we always get requests to paint them yellow."

He adds, the yellow is permanent like a tattoo.

"The cement in the concrete is yellow through and through, so if it gets chipped or dinged, it is still yellow. So it's not an ongoing maintenance issue."