Wildlife habitats are shifting and Calgarians are noticing

Have you noticed more or different types of animals hanging around your neighbourhood over the past few years? Some Calgarians have. Here's their wildest wildlife stories. 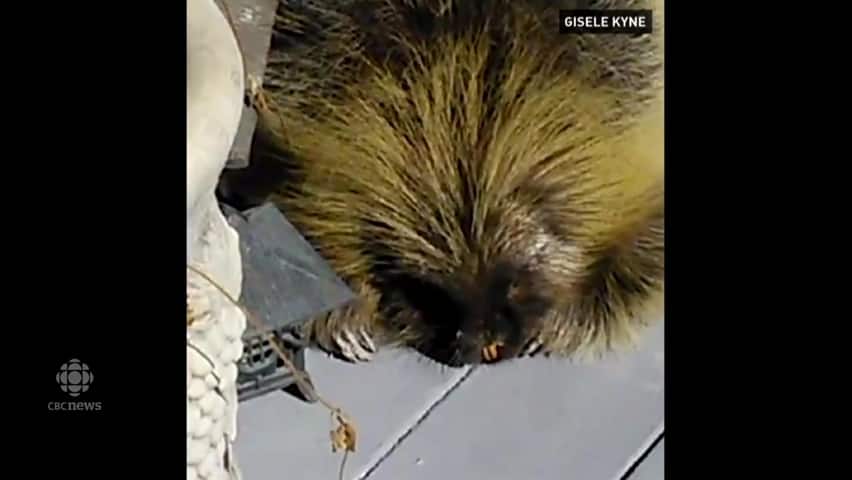 4 years agoVideo
0:40
The noisy, prickly tenant has made itself quite at home with one Bearspaw family. 0:40

Have you noticed more or different types of animals hanging around your neighbourhood over the past few years?

Wildlife biologist Chris Fisher told Alberta@Noon that some animal populations — like bobcats and moose — are expanding into Calgary as habitats shift for wildlife across the province.

"The population of many species across Alberta are extending to the north," he said.

He was in the studio last week as listeners shared their wildest wildlife encounters, and there were quite a few — everything from accidentally petting a coyote to a buck slamming a giant schnauzer into the ground with its antler.

Another recent — and super rare — animal sighting came from Homestretch wildlife expert Brian Keating. He was walking with his wife down near the mostly-frozen Bow River by the fish hatchery in Inglewood when he spotted some tracks.

He recognized them as wild otter tracks.

"I didn't actually see them, but I saw the evidence of them," Keating told the Homestretch.

He said there were three of them, and the tracks — four tracks close together and then a long belly slide — were unmistakable. Keating says otters can travel up to 42 kilometres on a single winter day on frozen rivers.

Otters are more common on the West Coast, but not so much in Calgary.

I'm a nurse at Rockyview and one night shift around 11 pm, security did an overhead page, "Patients and staff are to stay on their unit. Do not leave your unit until further notice."

So of course, we thought something terrible had happened, like a gunman in emergency or a bomb threat.

However, that wasn't the case. Rockyview hospital sits on the Glenmore Reservoir and a black bear had run inside the sliding automatic doors toward the back of the hospital and had come inside the hospital.

On Dec. 10, 2016, I came down the stairs in our home and noticed four deer in our backyard. Our sweet little Havanese puppy, Maxine, was barking her head off so I very foolishly let her into the yard. Three of the deer bolted out of the yard, but the fourth one spooked and blasted right through our family room window into our home.

So now, one has to wonder, what do you do with a real live deer (we named her Rudolph) in your home? The temperature outdoors was -32 C.

The flooring in the family room is ceramic and we feel that is what saved us. She could not get traction and was flailing — think Bambi on ice. She managed to turn herself around to where she could see the outdoors and was trying to move in that direction. My husband managed to get to the adjacent swing door, opened it and guided her out.

Miraculously there was no blood. Our animal appeared unharmed and bolted out of the yard. But there was glass and deer hair everywhere in the house — I am still finding fragments of both.

This could have been so much worse. It is amazing to me that from a standstill position, in a very short distance, the animal garnered enough strength to break through the window. While I have always admired the grace and beauty of deer I came to witness first-hand that they are very dangerous animals when in danger.

I don't think I have ever been as frightened about anything in my life ever.

The large window in the family room was damaged structurally and we are still waiting for its replacement.

In retrospect, I should never have let Maxine out the door. I can't say for sure where she was when all of this was happening, but we scooped her up safe and sound when it was over.

It's quite the story. We live in Lacombe, Alta.