A Canmore woman and her family got a glimpse of a natural wonder on the weekend that very few people ever see — a white grizzly bear.

'Holy smokes ... those are grizzly bears. And one of them is white' 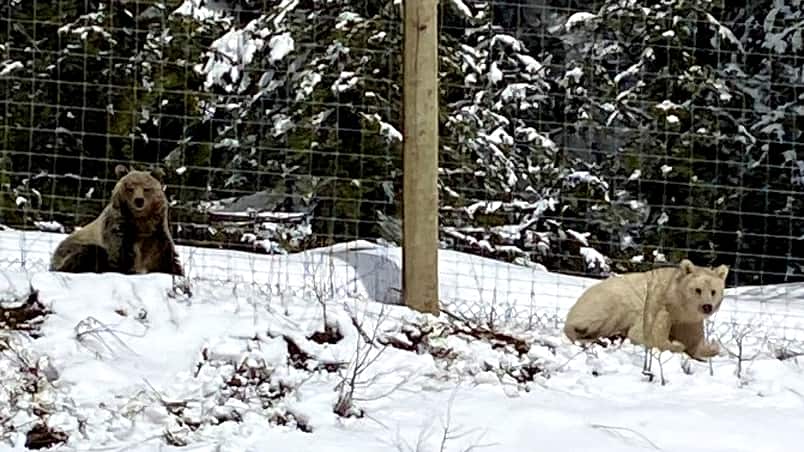 10 months ago
0:22
Cara Clarkson said it was an incredible experience when her family stumbled upon these two grizzlies looking for food along the Trans-Canada Highway in Banff National Park, especially because one was sporting a white coat. 0:22

A Canmore woman and her family got a glimpse of a natural wonder on the weekend that very few people ever see — a white grizzly bear.

Cara Clarkson was out for a drive in Banff National Park, an outing to celebrate her son and her husband's birthdays, when they spotted what at first looked like wolves at the side of the highway.

"And then, like, holy smokes, nope those are grizzly bears. And one of them is white," she said.

The two young bears — one white, the other normal coloured — were eating berries along the fence beside the roadway.

Clarkson said she later talked to some bear experts who told her it's a rare gene anomaly that makes the grizzly bear white instead of its usual brownish colour.

"We're talking polar bear white," she said. "For us, it was a once-in-a-lifetime opportunity. Which is probably the only reason we decided to slow down and take a little bit of video of it, because normally we could come across bears on a regular basis."

Clarkson said the sighting was a nice birthday treat for her son, who turned three.

"We took the opportunity to sort of educate him on, you know, bears and hibernation and berries and them keeping safe with fences, and things like that," she said.

"So it was great to talk about our environment and where we live and how we relate to them. And what better way to explain to him what it means to live with wildlife than to be able to see it."

Conservation biologist Mike Gibeau, a specialist in carnivores such as grizzly bears, says the unfortunate thing about such sightings is the harm that can come to the bears as a result of the ensuing publicity.

"These unusual looking animals get hunted ruthlessly by photographers, and so the less we talk about them, the better," he said in an email to CBC News.

"Even now, I suspect there will be photographers from all over North America here in the coming weeks."

For just that reason, Clarkson was deliberately vague about where she saw the bears.

"Because we live in their terrain, they don't live in ours," she said.

"I equate it to what we're doing right now. We're in self-isolation, so we are sheltered in place. Which means that the bears, which are typically sheltered in place because of our activities, are able to come out and do their natural activity."