The Insurance Bureau of Canada says the frequency, severity and cost of extreme weather in Canada are increasing, with Alberta leading the way.

Alberta accounted for 67% of disaster payouts in Canada 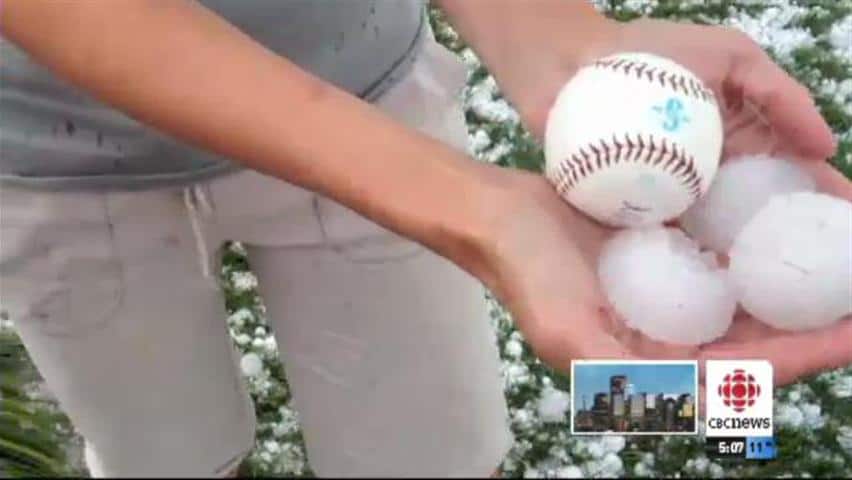 8 years agoVideo
1:47
If you've received a note from your insurance company telling you your home deductible is on the way up you can probably blame Alberta's unpredictable weather. 1:47

The Insurance Bureau of Canada says the frequency, severity and cost of extreme weather in Canada are increasing, with Alberta leading the way.

Alberta accounted for 67 per cent of disaster payouts in Canada, according to the bureau.

Don Forgeron, the organization's CEO, says Canada has been caught off-guard by the uptick in destructive weather.

"Storms that used to happen once every 40 or 50 years are now happening once every 15 or 20 years," he said. "And as a country we've just done nothing to prepare ourselves for this eventuality."

Annual payouts from flooding, fire, hail and windstorms increased from $100 million about 10 years ago to $1 billion between 2009 and 2012. Last year, hailstorms across Alberta caused $530 million in damage.

Forgeron offers a gloomy forecast of more extreme weather in the years to come and is urging municipalities to fix crumbling stormwater infrastructure to prepare.

"The numbers would indicate the possibility is becoming more the reality. We've seen a change in weather patterns … the experts that we've consulted say that we can expect more severe weather across the country," he said Wednesday following a speech to the Calgary Chamber of Commerce.

"We can choose to ignore it — bury your head in the sand and not do anything about it — or we can take a look at what's happened and use that as a bit of a guide going forward."

In November 2011, officials had to shut down Calgary's downtown core because extreme winds blew windows out of buildings.

Earlier that year, a wildfire ravaged the community of Slave Lake, Alta., with losses pegged at over $700 million.

"The insurance industry claim payouts are the canary in the coal mine," Fogeron said. "It's a bit of a sign or an indication of how much the cost is to communities across the country, and we've seen those numbers, especially here in Alberta, just skyrocket over the last four years or so."

Earlier this month, the Insurance Bureau of Canada confirmed that added weather costs have prompted some insurance companies to double the deductible for weather-related claims to as much as $3,000.

Forgeron deflected questions about whether Canadians can expect escalating insurance premiums. He said many insurers are being very "proactive" with their customers to make sure they are prepared for problems that can arise.

"We're doing what we can to keep costs down. It's my hope we will be able to limit those to an absolute minimum going forward, but if the past is any predictor we're going to see some nasty weather."

The Federation of Canadian Municipalities has estimated there is $69 billion worth of outstanding repairs, he said.

"While science has confirmed the weather is getting worse, we also know that aging stormwater and sewer infrastructure failure is to blame for most of the damage."

With the rain Calgary has seen recently, and with more unsettled weather expected this week, the Calgary Emergency Management Agency (CEMA) issued a warning Wednesday for local residents to prepare for the possibility of damage from flooding and severe weather.

"There is little doubt Calgary sees its share of severe weather," says Len MacCharles, CEMA deputy chief, in a release. "There are things Calgarians can do to minimize the effects of severe weather on their safety and property."

Some of those steps include:

CEMA also recommends drivers avoid pooled water, as some misjudge the depth and get stranded in rising water.

"Do not attempt to walk through pooled water or running water: it takes only six inches of water to sweep an adult off their feet, and only a foot of water to move a car," said CEMA officials in a release. "Do not allow children to play near running water, pools of water or storm drains."

Another tip is to prepare a 72-hour kit for the home in case of an emergency, such as power outages.