The city has reported four water main breaks and outages that are disrupting household services in communities including Elboya, Renfrew, Scarboro, Richmond and the Beltline as an extreme cold warning continues for Calgary and most of the province.

More than 60 homes are without water after water main breaks and outages across the city, as extreme cold warnings continue for Calgary and most of the province.

Weather warnings have been in place this week for Alberta as a polar vortex pushes its way across the Prairies. Daytime highs in Calgary have hovered near –25 C, or –36 with the wind chill.

Lee Dupras, the leader of repair and maintenance with the city's water services, said crews are responding to multiple water main breaks and service disruptions.

But in spite of the recent uptick in water main breaks during the cold snap, he said this winter has been better than most. 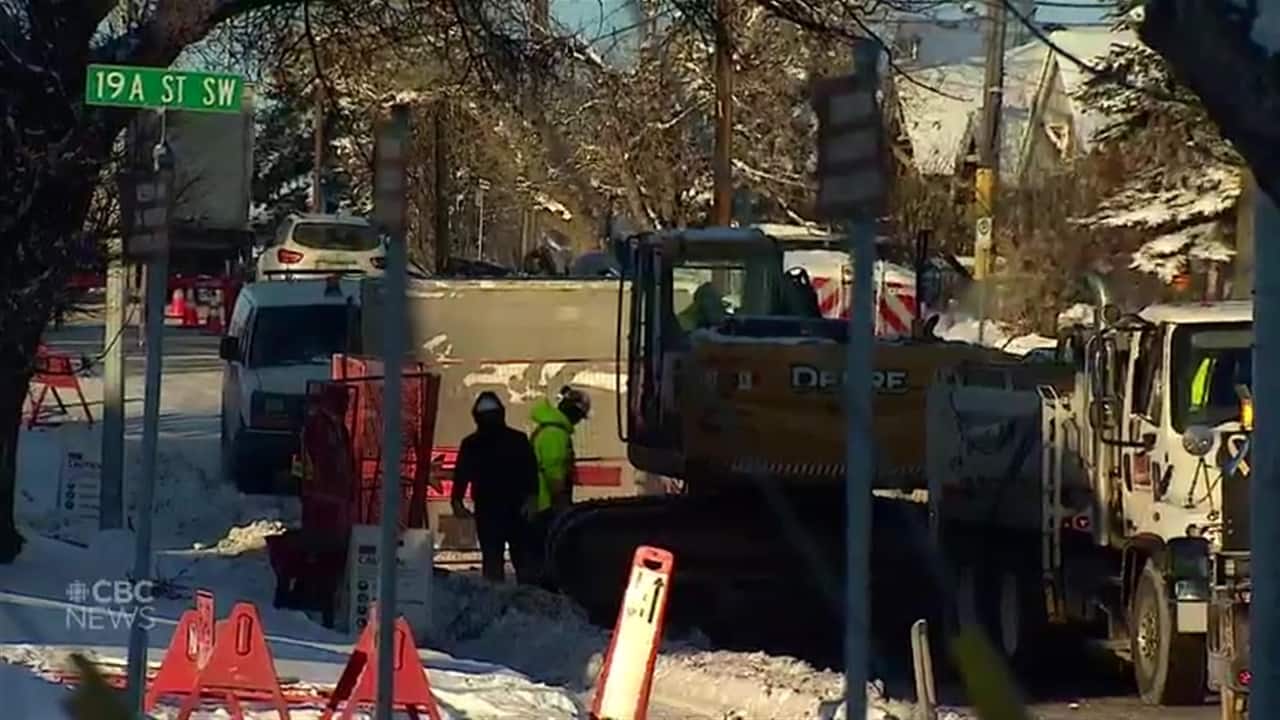 19 days ago
1:11
According to the City of Calgary's website, the outages include a water main break in the southwest community of Elboya, where 12 homes were affected, and a service valve leak in Calgary's Beltline that affected one home. 1:11

"Right now, I've got crews on three different water main breaks, we have another one that just came in. We've got approximately 66 homes out of water right now," Dupras said.

"But so far this year, our numbers have been low for water main breaks — lower than previous years in January especially — just due to the much more mild winter we've had this year."

According to the City of Calgary's website, current outages include a water main break in the southwest community of Elboya, where 12 homes were affected, and a service valve leak in Calgary's Beltline that affected one home.

On Tuesday, water main breaks occurred in the neighbourhoods of Renfrew and Scarboro. Those incidents affected nine and 15 homes, respectively.

A major road closure was prompted by a water main break in southwest Calgary on Monday night, when fire department Battalion Chief Alistair Robin said crews received a call about a break at the intersection of Richmond Road and 17th Avenue S.W.

Two homes in the area were affected by the service disruption.

But Calgary usually sees 40 to 50 water main breaks in January alone, Dupras said. This year, he estimated January had under 30.

He said the biggest effect on the city's water system is ambient water temperature — the temperature of the water that comes into the water system, goes through a water treatment plant and is distributed around Calgary.

"When the ambient water temperature gets really, really cold, when it starts to get close to freezing, the metallic pipes get a little more brittle," Dupras said.

"And then if frost levels get low, and start to get driven down into the ground, then there can be some ground shifting that affects our water mains as well."

Other factors can cause water main breaks, including pressure changes and the age, material and condition of pipes.

Chris Huston, manager of drinking water distribution in the city, said Calgary updated its frozen pipes prevention program after a bitter winter in 2019.

There were nearly 300 cases of frozen water-service lines that winter.

"We now have a more robust response plan, including better tracking, customer education and processes for response," Huston said.

"It's still very much a weather-related issue, so the challenges are different every year. If we have another year like we did in 2019, we will be better prepared, but it will still take time to thaw frozen services."

By Tuesday, Huston said, the city had received about 30 calls since the weekend from people dealing with frozen pipes in their homes.

Environment Canada has said the cold snap is expected to persist into the weekend for many areas of Alberta.

"A lot of folks want that fresh air no matter what the temperature, and they might leave a window open. But at temperatures like we're seeing, that's a pretty cold draft across your water pipe," Huston said.

"You want to make sure that doesn't happen. That's caused a lot of pipes to freeze."

The city's tips for prevention include keeping cabinet doors open to warm pipes with heat from the house, consistently heating homes to at least 15 C, and regularly running water through pipes.

It can also help to insulate both hot and cold water pipes, maintain hot water tanks that are located outside the house, and fix broken windows and doors to prevent cold drafts.

If you run into a frozen pipe problem in your home, Huston recommended calling 311.

With files from Terri Trembath and Dave Gilson