Warren Kinsella on Kent Hehr, #MeToo, Trudeau and Canada's smugness over our own alt-right

A former federal Liberal Party strategist, author and lawyer says Canada needs to wake up to our own alt-right movement in the wake of a Donald Trump presidency and Brexit.

A former federal Liberal Party strategist, author and lawyer says Canada needs to wake up to our own alt-right movement in the wake of a Donald Trump presidency and Brexit.

Warren Kinsella also weighs in on the allegations against now-former cabinet minister Kent Hehr and Prime Minister Justin Trudeau's response to the incident, in a wide-ranging interview with CBC Calgary News at Six host Rob Brown.

And Kinsella's recently published book, Recipe for Hate, although fiction, will likely be familiar to many Calgarians.

This interview has been edited for clarity and brevity. 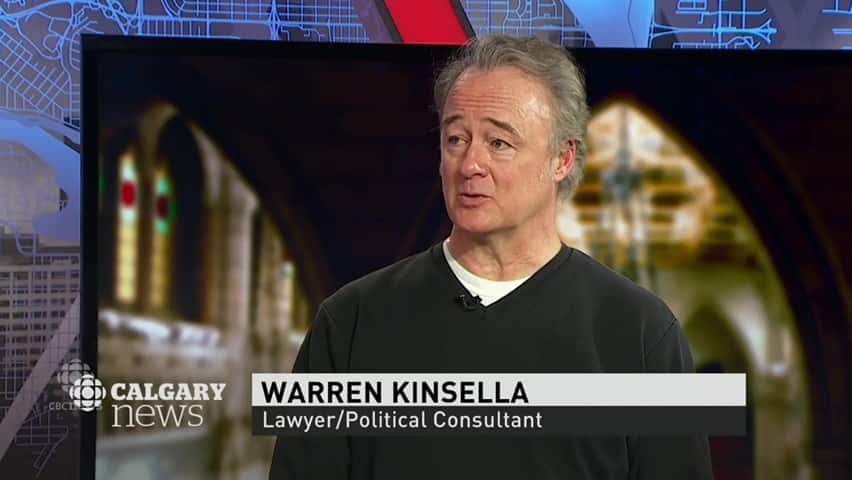 A: She was a Twitter friend, so I don't know her well. I didn't know she was going to do it. What we all tell our kids, what you put on the internet, what you put on social media, it's forever.

I've been writing quite a bit about #MeToo. She had asked me to come and speak at a #MeToo rally she was hoping to organize in Edmonton. I said 'By all means, I'd love to.' And then she was moved to write this story about this cabinet minister, and then it just tumbled out. It literally went, per the cliche, viral.

Q: Do you believe her?

A: I do. There's just a whole bunch of corroborating evidence and then she had a number of people backing up the story. This former minister was somebody who had demonstrated that he was careless with the things he had said to people.

You are teaching a class to law students about communications at the University of Calgary right now. On this incident, what would you tell your students?

The key thing, in his case, in former Ontario PC Leader Patrick Brown's case, you get ahead of it.

You can't hide. Inevitably these things come out. We live in an era where everybody has got a camcorder, a tape recorder and a camera in their pocket, every single person.

A: By confessing to it. By telling the story.

By giving your explanation for it as opposed to waiting for a journalist to show up with a microphone, and then the dynamic is quite a bit different.

Q: How is Justin Trudeau handing this fallout?

A: He has got to be pretty unhappy. This is his second cabinet minister who has been lost to inappropriate behaviour-type scandal. He's lost two MPs to that. He's lost a senior member of his staff.

I've known him for a long time, it's not why he came into office. That's the kind of stuff he wanted to get rid of, so I would imagine he's pretty ticked off.

Q: Why is it important for lawyers to work more effectively with journalists?

A: It's their professional obligation. Lawyers have to communicate with journalists on behalf of their client. They have an obligation to defend their client not just in court but also in the court of public opinion.

It's amazing, even though that obligation exists, there are very few law schools in the country that teach lawyers how to communicate better.

The University of Calgary is one of the first.

Q: How is your recently published fictional book, Recipe for Hate, relevant in light of global events recently?

A: When I was a law student at the University of Calgary I was working at the Calgary Herald, I came across a story. That is at the centre of this book.

It's a work of fiction, but anyone who lives in Calgary will see a lot of stuff in here that clearly is about Calgary. It's about the rise of the racist right.

Q: Have Canadians become a little too smug when it comes to the hate movements?

A: Yes. The Quebec City mosque: half a dozen Muslims at prayer, when they are most vulnerable. You have the Soldiers of Odin, an anti-immigrant biker group active in Ontario and Quebec. You have got a neo-Nazi newspaper being published in Toronto that my wife and I and others have been fighting. The alt-right organizing on campus in Winnipeg.

Here in Calgary, Combat 18 and Blood and Honour, who are this violent skinhead group and then in the Okanagan in B.C., you've got the Ku Klux Klan.

It's back and the principle reason why is Trump and Brexit. The far right feel encouraged to start doing the bad things that they do.

We do get too smug sometimes. We think Charlottesville couldn't happen here. Look at Quebec City, it was arguably worse by a factor of six.

With files from CBC Calgary News at Six and The Homestretch