Sharon Quinn just saw a tiger at the Calgary Zoo without leaving her home and she’s loving it.

'There are so many things that you can do' 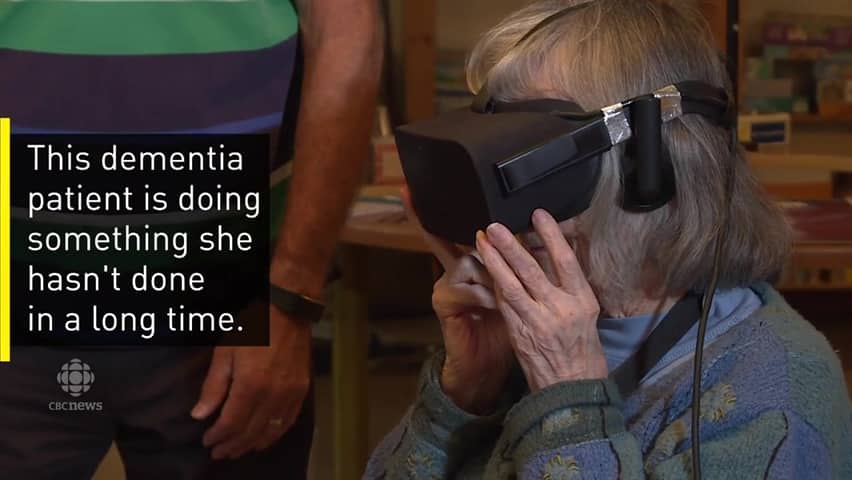 More than a dozen Calgary seniors living with dementia are visiting local attractions such as the Calgary Zoo, Heritage Park and the Calgary Stampede and all without ever leaving their home.

Sharon Quinn just saw a tiger at the Calgary Zoo and she's loving it.

But she didn't physically go to the zoo. She experienced it through the lenses of virtual reality goggles.

She's one of 12 seniors with dementia enjoying a virtual reality pilot project.

The 82-year-old visited the zoo, Heritage Park and even the Sydney Opera House, captured in 3D using a 360-degree camera.

"I like the fact we can go and enjoy different things. There are things in all of them that I like. There are so many things that you can do and it's nice to be able to get a feeling for it and then you can go and see it really, if you want to," she said with a smile.

Her husband, Bob Quinn, says the experience has put a sparkle in Sharon's eyes.

"I've been very impressed with the way it's gone so far," Bob said.

"I think it stimulates the brain and that's a wonderful thing."

Barry Pendergast is the man behind the project run by the Brenda Strafford Foundation.

He says it's an opportunity to go to a safe place or venture out of one's comfort zone.

"It's trying to get stuff that's familiar to the people and it seems to be resonating with them," Pendergast said.

"We've had one guy who looked incredibly frail coming in and within minutes he's just looking up at these crazy rides at the Stampede. It's just wild."

And sometimes it's about revisiting a pleasurable time.

"Like Bill, who was a pilot, I can take him flying," Pendergast said.

"He can actually fly a plane again in here, where he'll never fly again in reality. Or go for a sail. So we can do a lot of things that they could not normally do."

The pilot project is running at Wentworth Manor in southwest Calgary, but if it's successful in terms of emotional and physical benefits, the foundation would look for expansion funding.

With files from CBC's Lucie Edwardson and Radio-Canada's Nelly Alberola