A single telegram saved the lives of hundreds on Dec. 6, 1917 — the day two ships collided in the Halifax Harbour, setting off an explosion that decimated the city. 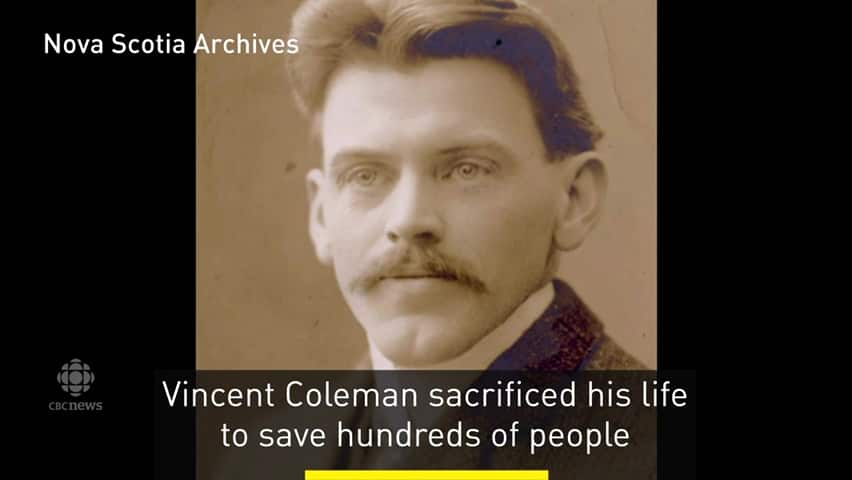 A single telegram saved the lives of hundreds on Dec. 6, 1917 — the day two ships collided in the Halifax Harbour, setting off an explosion that decimated the city.

Calgarian Jim Coleman never met his grandfather, railway dispatcher Vincent Coleman, but he's come to learn a lot about the man who died to save the lives of many.

"He had a choice, he had a decision to make and I think he made the right one — to stay and save the people," Jim Coleman told The Homestretch Tuesday.

Vincent Coleman, whose actions were captured in a Heritage Minute video, is being honoured at a ceremony in Halifax on Wednesday. His grandson is set to speak at the event, which marks the 100th anniversary of the day a Norwegian vessel and a French cargo ship collided, killing nearly 2,000 people and injuring 9,000.

"When the ships collided, there was a huge fire aboard the ships. People poured out of the offices in that part of the city to watch. A sailor came by and said the ship was full of explosives and it was going to blow up. [My grandfather] tried to clear the people away, there were school children, away from there. He ran back into his office and started the telegraph to stop the train," Jim Coleman explained.

"He stopped the train but he didn't have enough time to get away from the area, and he lost his life as a result."

The train that Vincent Coleman stopped from entering the area had 700 people on board.

"As a result of his actions, the other telegraph people were able to relay the message on and helped improve the expedition of the aid that came in. People were coming in from all over to help out.

"In addition to people dying, lots of people lost their vision because they were looking out the window. The explosion shattered the glass and hundreds and hundreds were blind or semi-blind," he said.

Jim Coleman said, for many years, people avoided talking about the disaster, including his grandfather's contribution.

"Most of my friends didn't know anything about my grandfather. When I was growing up in the '50s, '60s and '70s there were no commemorative events. It wasn't really spoken about."

But in recent years, there's been fresh interest, he said.

"People just didn't talk about it and now, 100 years later, people are talking about it and wanting to learn more about it. My father talked about it. He was 11 years old when it happened," he said.

"They were all heroes. I think we, as part of Canadian history, should look back and be very proud of those people."