'They get to experience a few more viewpoints, get some more stories and more hugs' 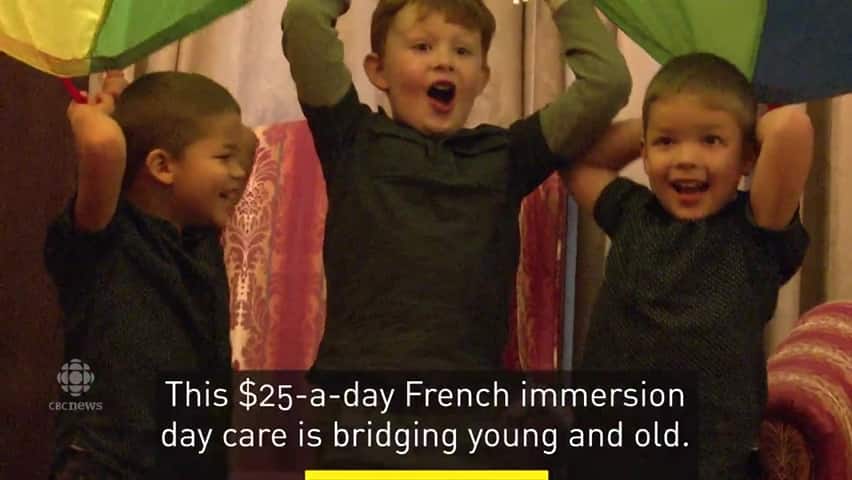 "It's been like finding a unicorn, everything you would want for your kid all wrapped up in one —​ it's been amazing for us," Holly Penhalagan told CBC News.

Penhalagan is the parent of a child who is benefiting from a partnership between VIK Academy and the Brenda Strafford Foundation's Tudor Manor. It's a French immersion child-care program that brings together children and seniors.

"For the younger ones, it's getting to see more of a variety than just their family. They get to experience a few more viewpoints, get some more stories and more hugs," Penhalagan said of the benefits.

And building those connections and relationships is the point, says the president and CEO of the Brenda Strafford Foundation.

"There is a tremendous opportunity for intergenerational programming and engagement that really enriches the lives of both the seniors and the kids," Mike Conroy said.

"It is a whole vitality and vibrance that the site is missing."

VIK Academy CEO Julie Errmann says that when it comes to learning a new language, the younger the better.

"The children benefit from early exposure. It's just to start making those connections in their brain," Errmann said.

"Children at that age need frequent interaction, they need sincere interaction. They need us to take time to stop and actually give them that feedback. We are busy as parents, we are busy in the classroom with many children. So having that extra person that actually stops them in the hallway and cares about their story means the world to them, which reinforces their value."

The Okotoks program has 64 spaces, filled with 80 children between 19 months and six years old, some of them part time. It's full and there's already a waiting list, but Errmann says the seniors win, too.

"It breaks them of isolation and their routine and makes a joyful environment. Seniors also have more positive interactions with their own families and they have nice stories to share with them as well."

And a resident of the home agrees.

"It's just wonderful to have them around. It cheers us all up. We've been there and done that. It's lovely to see them," Kathleen Silvester said.