The wildfire burning in Kootenay National Park has swelled to 10 times the size it was on Sunday as smoke from the fire continues to waft eastward, triggering air quality alerts in many parts of Alberta.

Open flames banned in Banff, Kootenay, Yoho and Waterton as flames get within 2.5 km of Sunshine Village 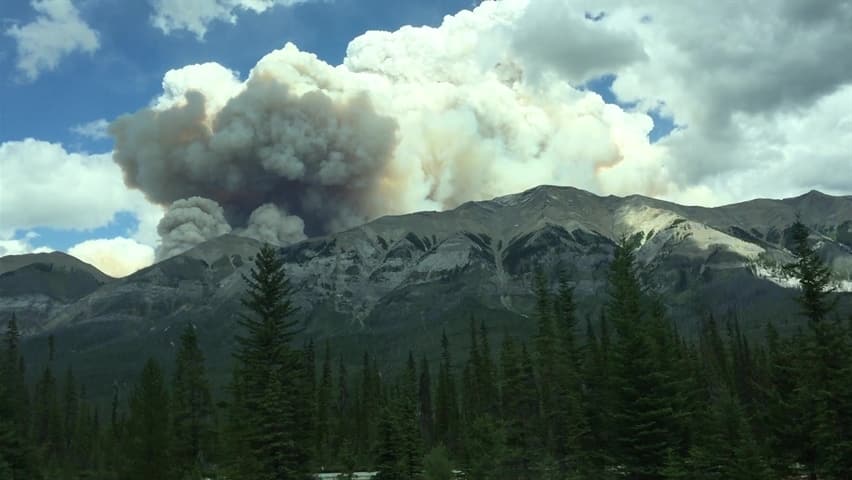 View of the Verdant Creek fire west of Calgary

3 years ago
0:19
Footage of the Verdant Creek fire west of Calgary, which has forced the closure of parts of Banff and Kootenay National Parks. 0:19

The wildfire burning in Kootenay National Park has swelled to 10 times the size it was on Sunday as smoke from the fire continues to waft eastward, triggering air quality alerts in many parts of Alberta.

The fire in the Verdant Creek area of the park, which was estimated to be 150 to 200 hectares on Sunday, had spread to about 2,000 hectares by Monday, according to Parks Canada spokesperson Christie Thomson.

The fire is about 2.5 kilometres from Sunshine Village, but remains on the other side of the continental divide, said Parks Canada's Verdant Creek fire incident commander. The fires is roughly 24 kilometres from the Banff townsite.

High volume pumps and sprinklers are ready to be turned on at Sunshine Village if the fire gets close enough to threaten buildings there, Park said.

"At the moment we have helicopters bucketing the eastern and northern flanks of the fire and crews implementing structure protection up at the Sunshine ski area," she said.

"But at this time the fire is being monitored and could be technically considered out of control."

The fire has prompted a ban on all open fires — not including gas and propane cook stoves — in the front and backcountry areas of Banff National Park. The Banff Fire Department has also issued a fire ban for the Town of Banff.

There is also a fire ban in place for Waterton Lakes National Park in southwest Alberta.

Camping and hiking in both Kootenay and Banff national parks has also been restricted because of the fire.

In Kootenay, the Verdant Creek area as far south as Simpson River is closed.

In Banff, the Egypt Lake area, Healy Pass, Citadel Pass, Sunshine Meadows and Village areas are closed. Hiking in the Sunshine area is closed, but the gondola and Upper Village remain open. 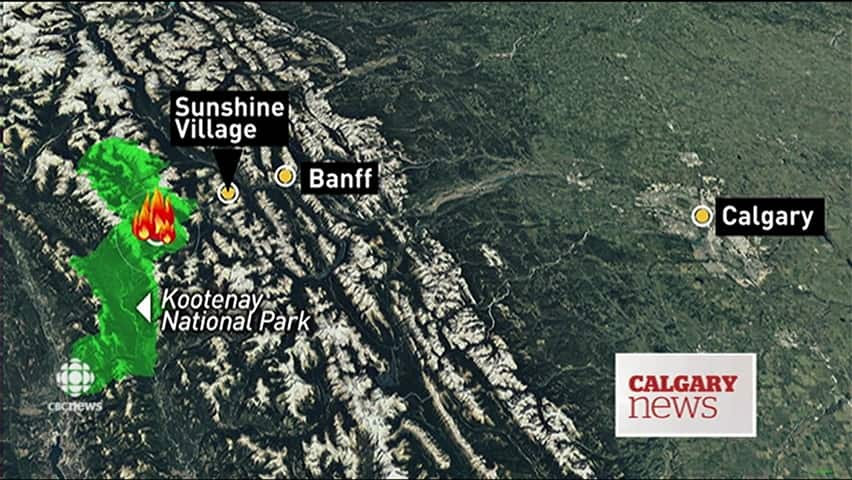 3 years ago
3:48
Resort prepares to keep buildings safe from wildfires 3:48

It's believed the fire was sparked by lightning at an elevation of about 1,800 metres.

Both Environment Canada and the province have issued alerts for communities in Alberta as the Air Quality Health Index (AQHI) has reached high risk levels in some places.

Most of Alberta is expected to get a reprieve from the smoke Tuesday, with AQHI levels in the low-risk range.

But the skies will get smoky again Wednesday. Environment Canada says central Alberta will likely see the haziest conditions, with AQHI ratings of 10 out of 10 in some areas.