The prime minister, the pipeline, and the lucky bounce in Calgary

After Justin Trudeau’s recent stumbles came a glorious gift for the prime minister — a pipeline from U.S. President Donald Trump — while Trudeau was conducting an optics exercise in Calgary, of all places.

During this optics exercise came a gift for the PM: a pipeline from Trump, while Trudeau was in Calgary

Prime Minister Justin Trudeau was back in Calgary this week, this time bringing 29 of his cabinet colleagues along for his government's annual strategic retreat.

The retreat — designed to flesh out the government's 2017 agenda — comes on the heels of Trudeau's recent Christmas vacation controversy and his use of a non-governmental helicopter to travel to a private island.

The incident led the prime minister to skip the annual World Economic Forum in Davos and instead hold court over double-doubles across the country's coffee shops, in a nationwide meet-the-people tour to humble his image.

And during this optics exercise came a glorious gift for the prime minister: a pipeline from U.S. President Donald Trump, while Trudeau was in Calgary.

He couldn't have scripted it better himself.

Over the past year, Trudeau has been no stranger to Calgary, coming here more than five times since becoming prime minister.

At this point, he's the amicable ski buddy who crashes on your couch, even though you're not entirely sure whether he knows how to ski or why he keeps coming back.

So, after so much (dare I say) overexposure to our city, why is Trudeau back? The obvious political answer is that he wants to increase his seat count for the next election. However, Trudeau's fortunes in Calgary appear to be limited.

Although this outlook may change between now and the next election, hinging in part on the outcome of the Conservative Party of Canada's leadership race currently underway, the political demographics of Calgary would only net Trudeau (through star candidates and several tough races) a single-digit seat increase.

Not a substantial win, considering all the Cowtown face time.

The more viable answer is optics — especially now, at a time when Trudeau is trying to shed a Laurentian elite caricature.

By creating frequent opportunities to showcase his investment and positive relationships with the people and city of Calgary, Trudeau is reinforcing the notion that he is, in fact, a big fan and stalwart champion of this city and its needs.

The rationale, at its most basic level, is a clever play on reciprocal endorsement — trying to earn an entity's endorsement by repeatedly endorsing the entity you are courting. If you say enough good things and show enough of a commitment, they will eventually have to return the favour.

He's certainly got the mayor on board, who seems to be committed to seeing through Trudeau's conversation-centric vision, while having his ear on several city-related causes.

From appearing chummy with Mayor Naheed Nenshi (arguably the only Canadian politician more popular than Trudeau himself), to showcasing Alberta's changing demographics when Trudeau donned the sleeves-up and jeans look at the University of Calgary event held on Tuesday evening.

Perhaps most significantly, this trip signalled to the rest of the country that Trudeau aspires to be a plugged-in leader to all Canadians — even those living outside of his party's stronghold and those who may be feeling unforgiving toward the federal government.

While we don't know what exactly happened in the strategy meetings (think flip charts, buzzwords, and multi-coloured Sharpies), we do know that whatever was being discussed was (at least publicly) usurped by a gift that the Trudeau government was probably not planning for — the approval of the Keystone XL pipeline.

An educated guess would suggest many cabinet members were gathered in huddles during the weekend, desperately brainstorming how to build goodwill with Trump.

The news of the pipeline, while the government was sequestered in Calgary of all places, could not have been more of a boost if it had been planned.

It was a lucky bounce for Trudeau, who last week was facing significant heat for his comments regarding the phasing-out of the oil sands. He even took the opportunity while here to walk back those comments.

But while Trudeau's cabinet seemed elated with the timely Keystone announcement, this development might not seem quite so rosy when they go back home to their constituencies, and are asked to defend the pipeline's uncertain environmental ramifications.

The Calgary visit also featured an aforementioned town hall with the prime minister. Trudeau took questions on Canada's role in the world and domestic policies, including Canada's restructured taxation system. He also took some heat on whether Alberta's tough times could cause disengagement with the rest of Canada — the thorny old issue of Western alienation. 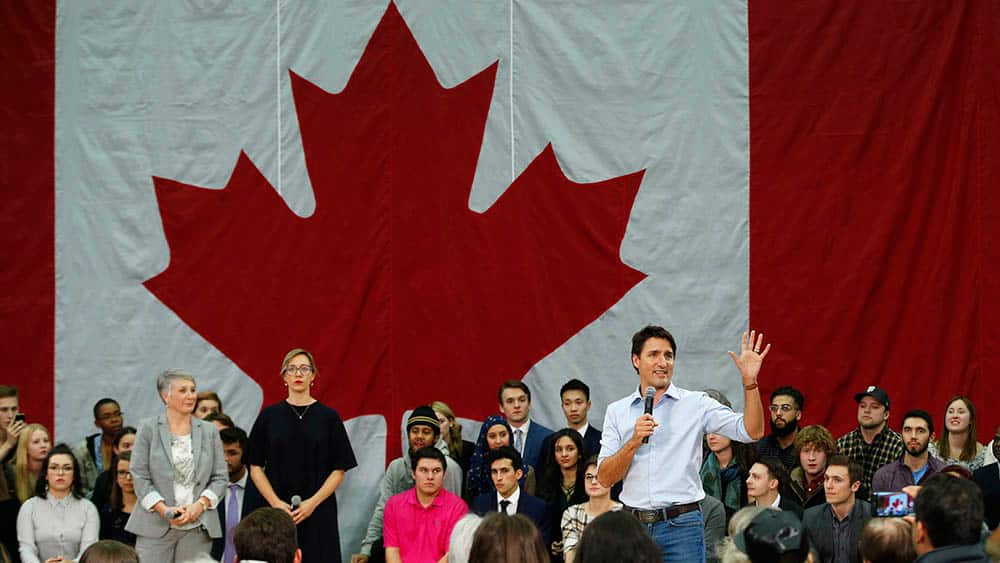 4 years agoVideo
1:41
Prime Minister Justin Trudeau gets a rough ride from the crowd during his town hall 1:41

Trudeau, like any skilled politician, rejected the premise of the question, suggesting that he doesn't let "recent polls" dictate how much pride Albertans feel for their country. The crowd seemed to agree.

Trudeau appeared loose and comfortable, in his element as a patient teacher who gently admonished hecklers in the crowd by moving past them, commenting that he would only be rewarding positive behaviour. Once again, the crowd, which exceeded 1,200, validated his approach.

This cap-stoned a retreat that was as much about brainstorming for the future, as it was about engaging with a city that's been struggling to economically rebound.

For Trudeau, 2017 will be a year defined by his ability to implement economic elements of his platform, build a relationship with President Trump (in the single, funniest buddy comedy of all time), and act as the global counter-puncher to populist conservatism.

It's a big task for a man who is going to increasingly play a domestic balancing act around several competing priorities.

With the uncertainty of upcoming municipal elections, Alberta's changing demographics, and Trump's unpredictable energy-related policies, perhaps the only constant will be Trudeau's ongoing pilgrimages to the city.

Just make sure your couch is available.

Zain Velji is a senior campaign strategist and vice-president of strategy at Northweather, a communications and technology firm. He's also a regular on CBC Calgary News at 6's political panel.