Facing labour camps after the fall of Saigon, the Trinh family became among the millions of people to escape Vietnam. Their journey of hunger and danger aboard a rickety fishing boat, ending in a successful life in Canada, has inspired a new Heritage Minute.

For Sam and Rebecca Trinh, 1979 was the year they ran out of choices.

After the fall of Saigon at the end of the Vietnam War, Sam, a soldier, was slated for re-education at a labour camp in the Vietnamese countryside.

Inevitably, that would have meant hard labour and indoctrination into the ideology of the communist regime. Quite possibly, it could have meant starvation, torture, even death.

"We had to go," Rebecca Trinh recalls. "We had no freedom, they forced us to leave."

The Trinhs' story of escaping Vietnam is told in a Heritage Minute being released today by Historica Canada. Daughter Judy Trinh's essay about the experience inspired the idea.

After making the decision to escape, the Trinhs sold what they could and converted it into gold pieces, the preferred currency at the time.

Sam Trinh says he knew they were cutting ties to their home forever.

"We lost everything. We would not be able to return."

They bundled up their two young daughters and boarded a rickety fishing boat, crammed with three times the number of people it was made for.

Rebecca was most worried about the kids.

"I worried about how to protect them, because Judy was four and Helen was not even two at the time."

The hunger and discomfort was just the beginning.

Twice, the boat was boarded by pirates, armed with axes, knives and guns intent on stealing what little the frightened passengers carried. They took the gold the Trinhs planned to use to start their new life and their wedding rings.

Judy Trinh, now a freelance journalist in Ottawa who regularly contributes to the CBC, remembers little from the five days on the boat as it crossed the Gulf of Thailand, certainly not these armed marauders.

What she does recall is the constant gnawing hunger.

"I was screaming and I was starving, but there was no food."

I was screaming and I was starving- Judy Trinh

Her mother, Rebecca, frantically searched for anything, finally finding something she had been sitting on for who knows how long,

"It was a flattened taro root bun.  It may have been there for days, it may have been mouldy," Judy says. "It was enough for her to just hand it to me and for me to eat it, just so I would stop crying."

But, even the armed pirates were not as frightening as what was to come.

The boat was headed to the shores of Malaysia. But the Malaysian Coast Guard intercepted, towing their boat back to international waters.

They were not welcome.

Jumping into the sea

Knowing Malaysia was required to accept refugees if they came ashore, the captain ordered the engines smashed with sledgehammers and the passengers began tearing the boat apart, to use pieces as flotation devices.

The Trinhs say they had no time to be afraid as their ship began to sink.

"I jumped down into the water," Sam said. Paralyzed with fear, his four-year old daughter Judy refused to jump, so her mother threw her overboard.

"[I put] my arms around Judy and then swam to shore," Sam recalled.

Rebecca was next, jumping overboard with two-year-old Helen in her arms and swimming to shore.

They were accepted and lived at the Malaysian refugee camp for three months.

Then the Canadian immigration officials arrived, bringing with them the hope of a new home in Canada.

Scott Mullin was one of the immigration officers who interviewed hundreds of refugees a day.

Most had no documentation and there were no computer databases to confirm their stories.

So, Mullin and others like him relied on their gut instinct when deciding who could come to Canada.

Mullin says potential became one of the most important criteria.

"You know, a little girl in the refugee camp who is eight or nine years old who had learned an astonishing amount of English while she was there."

Thirty-eight years later, Mullin tears up while watching the Heritage Minute that dramatizes the role Canada played in resettling so many desperate Vietnamese refugees.

"The country is better for it," he says.

Example for the Syrians

"As we go through debates as we did not so long ago around the Syrians coming, we sometimes forget to look back a little bit and say, you know, we have a tradition of doing this reasonably well in Canada."

The Trinhs had their struggles over the years, working long hours at low-paying jobs in Lethbridge, Alta., while also attending English classes.

But they succeeded. Sam became a welder, Rebecca is a financial adviser and the family of four who escaped an oppressive regime in Vietnam has grown to 11 in Canada.

"I think there's a negative connotation when you use the term refugee, for some people," Judy Trinh says. "For me, it means survivor, it means strength, it means an ability to persevere." 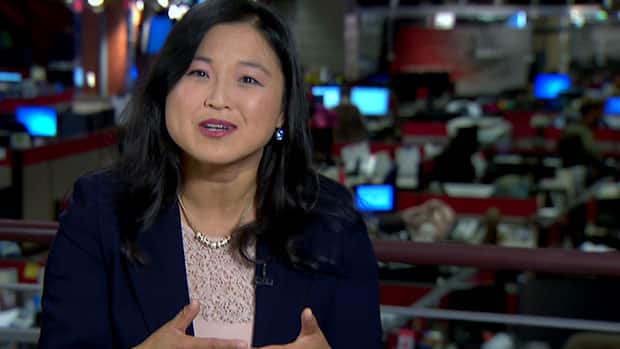 Judy Trinh on her family's story

3 years agoVideo
5:06
Trinh – who was 4 years old when her parents fled Vietnam – discusses what she remembers about the harrowing journey 5:06