Alberta artist Luke Carruthers has produced a piece of art he calls the Gord Downie Penny Tribute, a portrait of the late Tragically Hip frontman composed entirely of Canadian pennies. 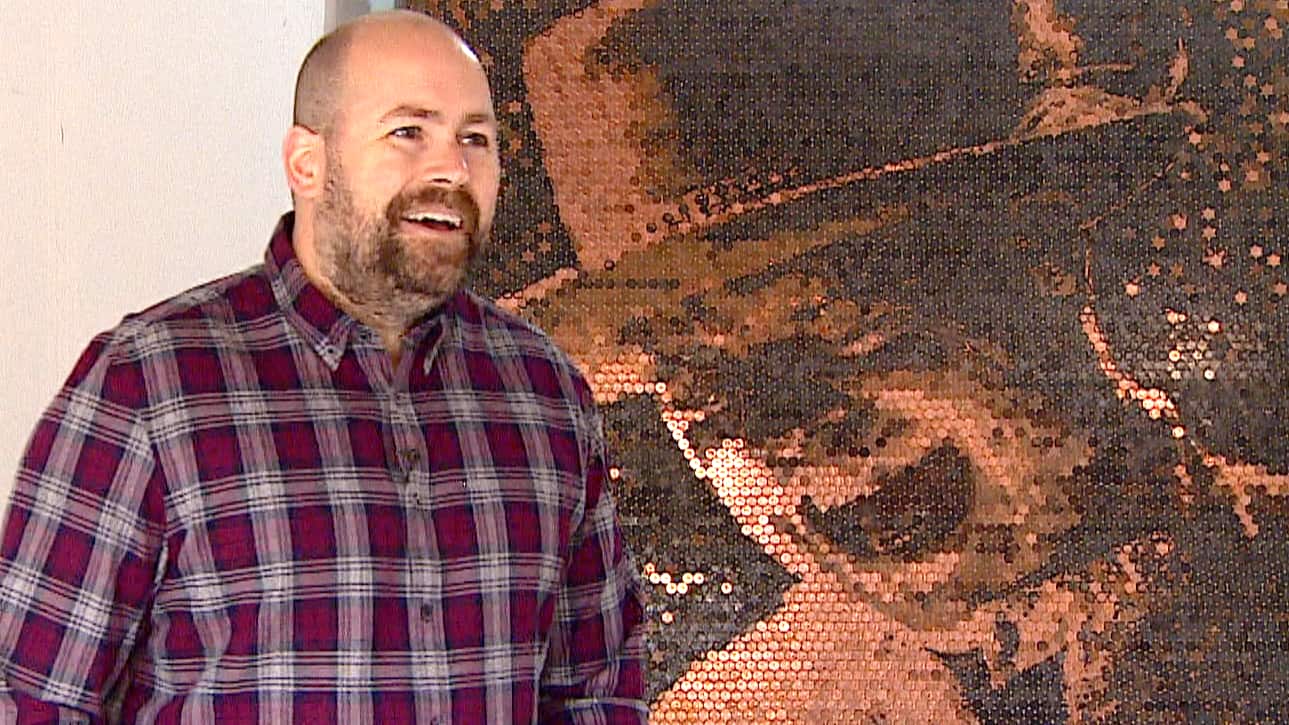 This Calgarian made a tribute to Gord Downie that took him 3 years and 11,400 pennies

3 months agoVideo
2:01
One of Canada's most beloved musicians will shine on forever in a giant penny tribute from an artist that was blown away by The Tragically Hip's music. 2:01

Alberta artist Luke Carruthers has produced a piece of art he calls the Gord Downie Penny Tribute, a portrait of the late Tragically Hip frontman composed entirely of Canadian pennies.

For Carruthers, who hails from Airdrie, the project has been a labour of love that took nearly three years to complete.

"Each one of these rows took me about an hour, so I think about 300 hours altogether once I got it all in one piece," Carruthers told CBC Calgary.

Since putting it out on social media last week, Carruthers has been overwhelmed by the response to the massive portrait, which depicts Downie during his farewell tour.

Carruthers said he's heard from Hip fans far and wide who are missing the band, and said the piece seems to have touched a nerve with Canadians.

"There's the whole Canadiana aspect of it, we're all proud Canadians and he was singing about places we knew and had heard about and wanted to visit, and eventually move to. So I think, like any other Hip fan, it was just kind of a journey," he said.

"And then when you heard that Gord was going to die, I mean, wow, it was just heartbreaking. So, yeah, I think it was just a way to do a tribute to somebody that's brought so much music and joy into my life, and my family, and my friends and all the people I know."

The piece weighs about 150 pounds, Carruthers estimates, and is supported by a heavy barnboard frame and backing.

"I think the pennies themselves weigh about 65 pounds .… there's about 20 pounds of glue in it," he said, adding that he painstakingly sorted out the pennies for their different hues.

He experimented with different products like vinegar and liver of sulphur to bring out the qualities of the pennies, which range from 1939 and forward. The newer pennies don't contain copper so they age and colour differently. Carruthers was able to render the portrait in great detail using the different finishes on the 11,400 pennies.

"I started finding these really interesting designs, because underneath there'd be air bubbles caught when I was soaking them in these glass containers," he said, pointing out some mottled and detailed pennies. "So it's getting these really cool designs."

Carruthers does not know where the piece will end up and said he did not create the portrait to necessarily sell it.

"That wasn't my thought, I think when I was doing it I was just creating art," he said. "Now, I've gotten so much positive feedback from so many people, I'd like to maybe have it go somewhere where people can maybe see it and enjoy it."

Growing up, Carruthers spent a lot of time working with his dad in the family's two small record stores in the Maritimes, and listened to a lot of music.

He still remembers the day he became a Hip fan.

"I remember hearing Blow At High Dough, just the first notes in it, and this is back in a time when everybody was listening to glam metal, and everybody, all the singers, were these high pitchy singers. And then you had Gord that came in with this really bassy vocal and these really cool riffs at the beginning. And I was like, 'Oh yeah, this is my new band,'" Carruthers said.

"And then, just over the years, Canada Days and bonfires, and going out to concerts, and being at the record store, I got to go backstage a couple times and meet these guys."

For Carruthers, the Tragically Hip is part of the fabric of growing up in Canada, and that's why he'd like his Canadian penny tribute to be shared with Canadians.

"If we could get it somewhere where people could enjoy it for a while," he said. "I don't want to see it sitting on some private collector's wall somewhere or something. I want people to be able to see it, and enjoy it, and share the experience, and talk about the music they love, and in the country they love, and everything that comes with it."