An Alberta woman says a return flight from Nova Scotia to Calgary last month went wrong after her granddaughter was prevented from using the closest washroom, leading the toddler to wet herself and sit in her own urine for about three hours.

'I can’t have you coming up here anymore,' Calgary woman says flight attendant told her 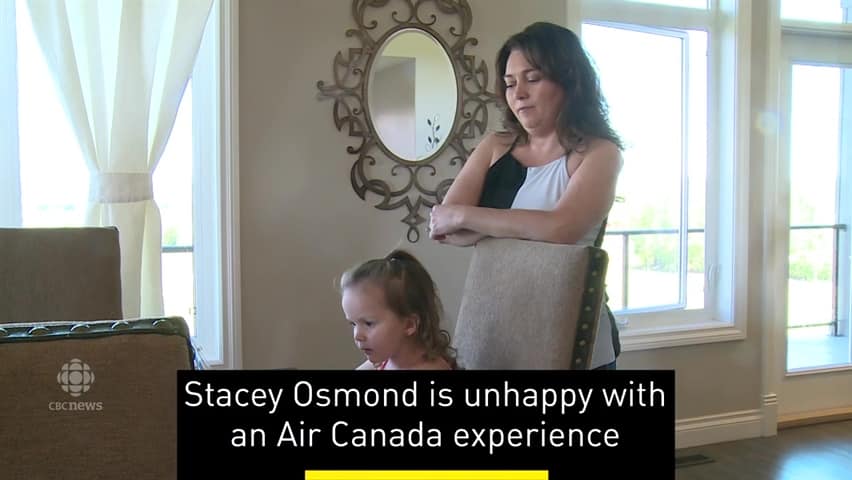 Toddler sits in own pee for hours

3 years ago
0:32
Grandmother says airline would not let her use business class washroom 0:32

An Alberta woman says a return flight from Nova Scotia to Calgary last month went wrong after her granddaughter was prevented from using the closest washroom, leading the toddler to wet herself and sit in her own urine for about three hours.

And while Air Canada has offered to make it right, Stacey Osmond says she is looking for a personal apology from the flight attendant to prevent it from happening again.

Osmond says the agent who helped her book the flight put the couple in seats close to business class at the front of the airplane so that her granddaughter, who's almost three years old, would have quick access to a washroom.

"The second or third time I tried to take Ruby to the bathroom, the flight attendant told me, 'I can't have you coming up here anymore,'" Osmond, who lives in Okotoks just south of Calgary, told CBC News.

"I said, 'She's a baby. I was given those seats by a booking agent for that reason, so that she would be close to the bathroom.'

Osmond says about midway through the 5½-hour flight, her granddaughter, Ruby, needed to go but a service cart blocked her access to the washroom at the rear of the plane.

Ruby couldn't hold it and wet herself, Osmond says.

"I sat there, still having to play with Ruby with a smile on my face, while I was just full of anger because of this woman, especially after she peed in her pants. I got some napkins off the flight attendant and I put them underneath her so she could sit on them."

Ruby had finished potty training months earlier, so Osmond did not think to have a diaper on hand. She says she didn't have a change of clothes ready either, because she hadn't flown with a small child in about 15 years.

Once back in Calgary, Osmond says Air Canada offered her a 25 per cent discount off her next flight, a $200 voucher and some toys for Ruby, but the 44-year-old says she's looking for a full refund and she'd like to hear from the flight attendant directly.

"I'd like her to have to call and apologize and maybe she'll think twice about how she acts in the future," Osmond said.

"It was a very unpleasant flight for us."

An airline spokesperson acknowledged the incident.

"We're in contact with our customer about this regrettable incident. We have no further comment," Angela Mah wrote in an emailed response.

A Halifax-based airline passenger advocate says staff should be able to use discretion.

"Something has to change here," Gabor Lukacs said.

Meanwhile, Osmond says her issue is with that one employee.

"I don't blame an entire airline for one flight attendant," she said. "This was the first time I experienced such hostility."