A now-disqualified United Conservative Party candidate is defending racist and anti-Islam comments he made on social media that prompted his removal from the southern Alberta ballot. Warning: this story contains language that might be disturbing to some readers.

Warning: This story contains language that might be disturbing to some readers

A now-disqualified United Conservative Party candidate is defending racist and anti-Islam comments he made on social media that prompted his removal from the southern Alberta ballot.

The posts, in which he calls the religion an "evil cult," came to light only days before party members were set to vote in the district of Brooks-Medicine Hat for their representative to run under the UCP banner in the 2019 Alberta election.

"Did I say harsh words? You're darn right I did, and I stand behind them," Todd Beasley said Monday in an interview with CBC News.

The party rejected Beasley as a candidate on the weekend, citing some of his online comments, including several posted to Facebook in 2017.

"Islam is not a religion of peace. It's cruel, revolting, racist, oppressive and has no legitimate basis," said one of Beasley's Facebook posts. "The Mongols would have done mankind a favour if they snuffed this evil cult when they had the chance."

Beasley was commenting in response to a post criticizing what the original writer called "an extreme anti-Muslim agenda" in Canada. In response to that same post, Beasley called the Prophet Muhammad a series of hateful names.

In the interview with CBC News, Beasley said he wants people to know that his opinions about Islam are informed by his contention that some Muslim religious leaders preach violence against "Christians and Jews."

"When it comes down to it, I did say some tough words. Perhaps I went a little bit overboard on some of those words but I absolutely stand behind the sentiment of what I said," Beasley said.

Beasley said the publicity around his comments is "obfuscating" the real issues in the local election, and he felt he had flagged his online discussion topics to the party and was encouraged to run regardless.

"You would do me a service if it's just made clear I am not absolutely obsessing over Islam. It was in the context of that time," he told CBC News.

The United Conservative Party said its nomination committee disqualified Beasley from the race last week, once party researchers flagged the inflammatory comments. Beasley appealed the decision but the party's board upheld his disqualification. The party said he then chose to resign.

"I think they're hateful, inappropriate comments that are not consistent with the United Conservative Party's values or acceptable comments for our candidates to be espousing on our Facebook pages."

Social media posts found by CBC News, along with other posts provided by the UCP, show Beasley has expressed similar hateful beliefs on a number of occasions.

Beasley has also posted on social media multiple times since Saturday's disqualification, telling supporters he makes "no apologies" for his opinions.

"I reject Islam and all it stands for," he wrote in a post late Sunday night.

In that post, Beasley also explained to supporters that, in response to a budget announcement, he called Alberta Premier Rachel Notley and Finance Minister Joe Ceci a vulgar word and said he thought they should be in jail.

In a letter sent to Beasley to inform him of the final disqualification, party executive director Janice Harrington said the board rejects both Beasley saying he adequately flagged the posts when applying for nomination and his claim that the comments "are somehow part of a constructive critique of a major world religion."

"As our leader, Jason Kenney, has previously stated, we cannot allow 'bozo eruptions' to inflict serious harm to the overall objective of defeating the NDP and getting our province back on track," Harrington wrote in the letter.

Beasley had passed an early interview-based local nomination approval, Henwood said. In a video posted on Beasley's Facebook page, a local committee member said Beasley and the two other candidates — Michaela Glasgo and Dinah Hiebert — had passed that stage of the screening with no concerns. 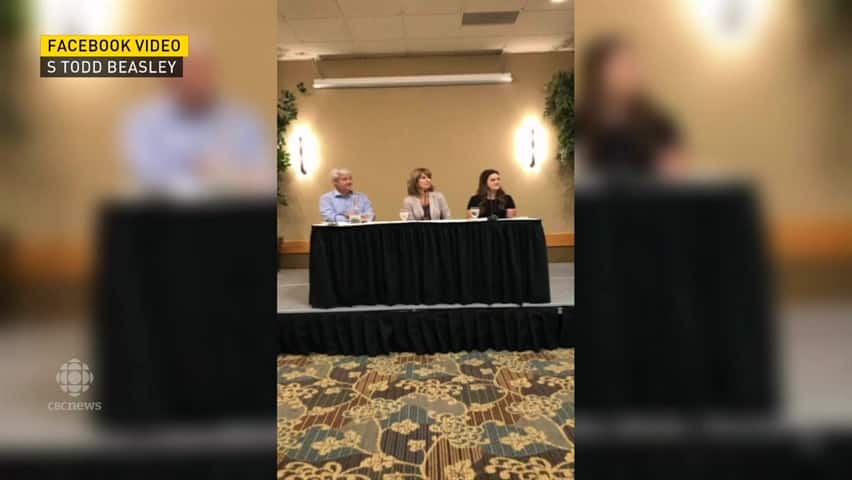 However, the UCP said in-depth research and a party background check wasn't yet completed, which includes a criminal record check and social media searches. That work was completed as recently as a week ago, according to Henwood.

Dozens of supporters have posted comments on Beasley's Facebook page, many calling on voters to pick a different party. Beasley also said he'd been "flooded" with support from across Canada.

"I feel like I've been lied to and manoeuvred," he said.

"I'm just very, very disappointed that we weren't going to make this an issue because we didn't want to harm the party."

The disqualification comes after a difficult weekend for the UCP. On Saturday, Calgary MLA Prab Gill resigned from the UCP caucus following an investigation into allegations of ballot stuffing levelled at a constituency meeting last month.

And on Monday, the UCP said it would pay back just over $7,200 after taxpayers were charged for a what turned out to be a party event.

Beasley's disqualification is also the second for the party in recent months. Another applicant was disqualified for running for the UCP in northern Alberta following a background vetting, Henwood said.

"Our vetting process I think worked in this case," he said. "[Researchers] identified, found, discovered some comments that were inappropriate and ultimately led to Mr. Beasley not being in this race."

'Every party is scrambling'

This type of systematic vetting is more important than ever, says University of Calgary political scientist Ian Brodie — especially as the UCP tries to encourage new people to run in the wake of the Progressive Conservatives and Wildrose parties' 2017 merger.

With the UCP holding nomination elections far in advance of the 2019 election, researchers are already swamped, Brodie said.

"I think the problem is partly the scale of the problem. The UCP's moving early on a lot of nominations and that puts all your pressure on the researchers to catch the odd problem with a candidate.… That gets very difficult to do," said Brodie, who was chief of staff for former prime minister Stephen Harper.

"I think part of the problem here is people's online lives, and the amount of stuff about somebody's background that's available to researchers has exploded in the last 10 years. I think every party is scrambling to keep up with that."

He said the next few months will keep party staff very busy.

Glasgo and Hiebert are now squaring off in the vote, which got underway Monday and continues Tuesday.

​With files from Anis Heydari.