Despite being in his golden years, the lean, mean, balloon-popping machine could likely beat his own record 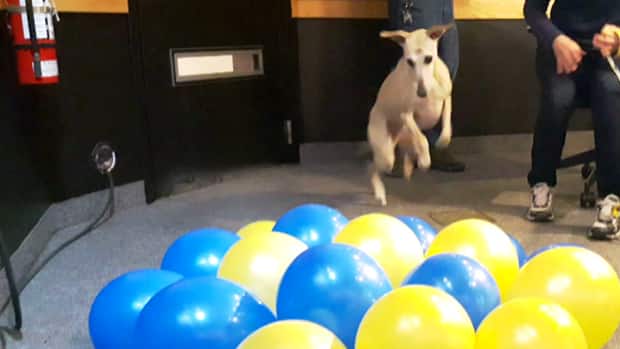 4 years ago
0:34
Using just his teeth and paws, the nine-year-old, cream-coloured dog exploded 100 balloons in 36.25 seconds at the Shawnessy YMCA Sunday afternoon, beating the Guinness World Record of 39.08 seconds. 0:34

Calgary's own Toby the whippet is about to be recognized as the fastest canine balloon popper in the world.

Using just his teeth and paws, the nine-year-old, cream-coloured dog popped 100 balloons in 36.25 seconds at the Shawnessy YMCA on Sunday afternoon, beating the previous Guinness World Record of 39.08 seconds.

"It was surreal waiting for the timers to say what the time was," owner Christie Springs told CBC's The Homestretch.

"We were wondering if we'd made it. When we found out that we did, we were really elated."

Springs discovered Toby's natural talent for balloon-popping by accident. The pair were on a walk and found a balloon caught on a frost fence several years ago.

"We chased it through the field and thought that was funny. Then we decided that if that one was that funny, three would be hilarious," she laughed.

"It escalated to the point where we were filling our outdoor swimming pool full of balloons to see how many the dogs could pop and entertain the neighbourhood."

It wasn't until a friend sent Springs a video of the current record holder that she realized this pastime could become a competitive sport for her and Toby.

Aiming to burst another record

Springs said Toby's time of 36.25 seconds needs to be verified by Guinness World Records before he becomes the official new world record holder. Still, she's pretty sure Toby could do it faster.

His best time in practice is actually 28.28 seconds, she said.

But in front of a cheering crowd and flashing lights at the Shawnessy YMCA, there were myriad variables that could have affected Toby's performance, Springs said.

"The first time that we did the practice, we were saying his name to cheer him on, and he kept leaving the board to see what we wanted. We had to encourage the audience to say 'Go, go, go' or 'Pop, pop, pop' instead of calling him."