A Piikani man is hoping to turn his entrepreneurial endeavour on the southern Alberta First Nation into a sustainable source of employment for Indigenous people across the country. 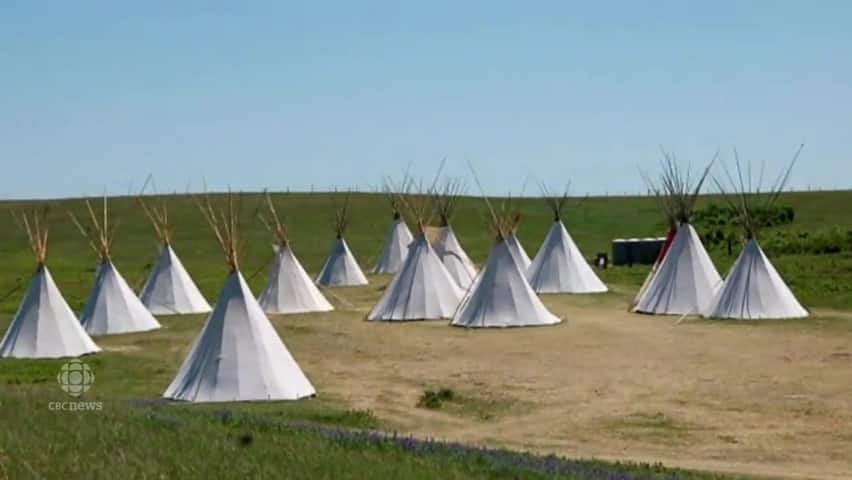 3 years agoVideo
2:11
A Piikani man is hoping to turn his entrepreneurial endeavour on the southern Alberta First Nation into a sustainable source of employment for Indigenous people across the country. 2:11

A Piikani man is hoping to turn his entrepreneurial endeavour on the southern Alberta First Nation into a sustainable source of employment for Indigenous people across the country.

"The most important thing people get when they come to teepee camp is they get a meaningful experience," Houle told CBC News. "They get to come back to the earth, to Mother Nature."

Houle is hoping his business will also become a meaningful source of employment and tourism on First Nation reserves throughout the country.

He is working to recruit other Indigenous communities to open their own teepee camp franchises, and will appear on an upcoming episode of CBC's Dragons' Den to appeal for investment to support the cause.

"Hopefully we're not going to be the only teepee camp on board," said Houle. "We want to recruit a lot of other camps from across Canada."

Houle said he first came up with the idea of opening his business when he was working as a janitor at Head-Smashed-In Buffalo Jump in southern Alberta and was asked to work security for similar camps run out of the cultural heritage site.

"I would put teepees up, I would tell people stories," he said. "I just met so many people and just kind of realized what kind of demand there was for a teepee camp out here. One thing led to another and it really took off."

From 2009 to 2013, Houle ran charter camps for groups on the Piikani Reserve. Business was brisk, bringing in more than $500,000 in revenue and creating spin-off benefits for subcontractors and artisans on the reserve.

But the business came to a halt when Houle was caught drinking and driving in 2013. He said it was an important lesson that led him to change his life.

"Since then I really learned my lesson, I don't take for granted my ability to go places," he said. "I quit drinking, I don't really walk that path anymore."

Now, Houle is hopeful re-launching his business will provide purpose and employment for other people on the reserve caught in the "epidemic" of alcoholism and drug abuse.

"Some people go down that road out of sorrow and grief, other people just end up there because there's nothing really to do on the reserve from an employment standpoint."

A path to healing

Houle said he thinks the teepee camp could be a sustainable business model for many reserves because it doesn't take a lot of capital to get it off the ground.

"It doesn't cost much to do a teepee camp, it's more work than buying stuff," he said.

"If you want to run a teepee camp you have to be willing to work and you have to know how to get the work done and it's not an everyday thing, how to put a teepee up," he said.

"I take great pride in it whenever I go and I put teepees up with people from wherever they're from. I take tremendous pride in it and that's something I want to pass down to other people that are from my nation — the young people."