Calgarian Taylor McNallie, a well-known anti-racism advocate, says she plans to fight a charge of assault laid by Red Deer RCMP on Friday.

Taylor McNallie, 29, calls the charge 'a joke,' says she'll take it to court

Calgarian Taylor McNallie, a well-known anti-racism advocate, says she plans to fight a charge of assault laid Friday by Red Deer RCMP in connection with a September anti-racism event in Red Deer, Alta.

"Hate groups and white supremacists, who have been stalking our events for months, showed up to a community discussion and attacked us," McNallie said in an email to CBC News.

"RCMP allowed this to happen. RCMP were very aware these people were coming, because we told them and shared [the] threats and posts online previously. They did nothing."

According to a release issued Friday, McNallie was charged with assault with a weapon in relation to the event.

RCMP Cpl. Deanna Fontaine told CBC News that because the matter is now before the courts, she could not discuss the details of the case.

RCMP have been investigating a series of "criminal incidents" that arose out of the event that organizers said became violent after counter-protesters arrived.

Red Deer Against Racism, one of the groups that organized the event, previously told CBC News that the goal of the event was to hear from Black and Indigenous people, people of colour and those of different ethnicities.

Before the event began, counter-protesters arrived with megaphones. After a human wall constructed by the event volunteer security team was breached, violent clashes broke out, many of which were shared on social media. 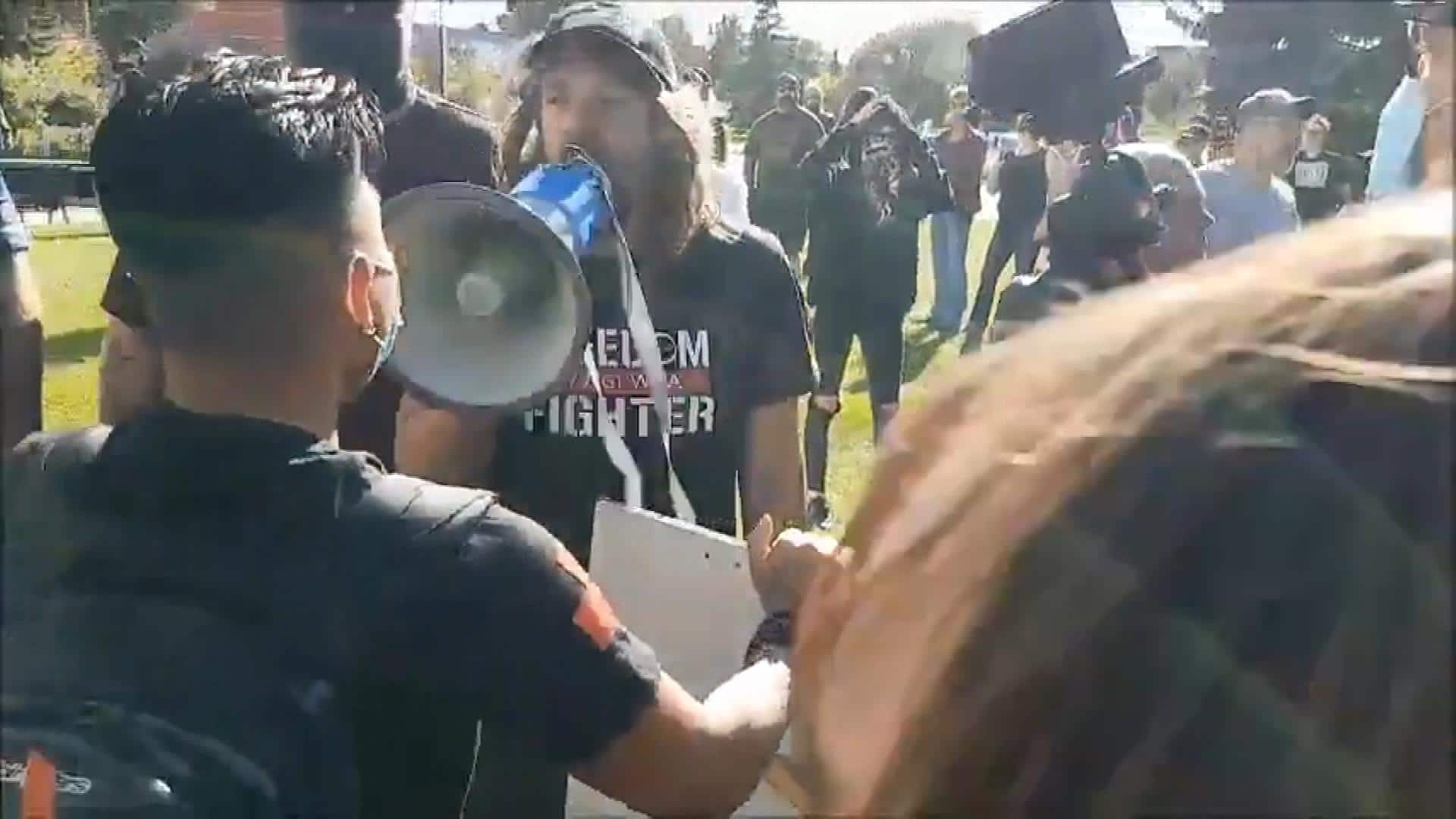 4 months agoVideo
2:33
RCMP are investigating after videos of violence surfaced at an anti-racism protest in Red Deer, Alta., events that several Alberta politicians say are disturbing. 2:33

In a previous incident, Red Deer RCMP said they had reviewed dozens of videos and interviewed a large number of witnesses, out of which they concluded three separate criminal incidents had taken place.

The first charge was laid against Trevor Lyle Roy, 42, of Penhold, Alta., who was charged with assault and was set to appear in court on Nov. 17.

Fontaine couldn't confirm the status of the third incident.

In a statement, McNallie said the charge was "a joke" and she looked forward to taking it to court.

"This one case is going to be one that opens up a much larger matter for us in regards to how the RCMP acted that day and continue to treat racialized folx in Canada," she wrote.

"Let me be very clear that this 'assault with a weapon' was a camera thrown at [the individual's] arm, leading to one of the best soccer dives of all time."

The word "folx" is intended to be used to as a gender-neutral substitute for the word "folks," and also is used by some to signal the inclusion of marginalized groups.

Speaking in September, Alberta's Minister of Justice and Solicitor General Kaycee Madu said he wanted RCMP to "get to the bottom" of everything that happened at the Red Deer rally.

"Anytime we have an incident like this, my hope is that the authorities get to the bottom of it. But more importantly, we must have the tools in place to ensure that peaceful protests do not become violent," Madu said at a news conference.

With files from Bryan Labby and Stephanie Dubois