A group of Syrian refugees have been giving back some of the goodwill they've received themselves by feeding Calgary's homeless. 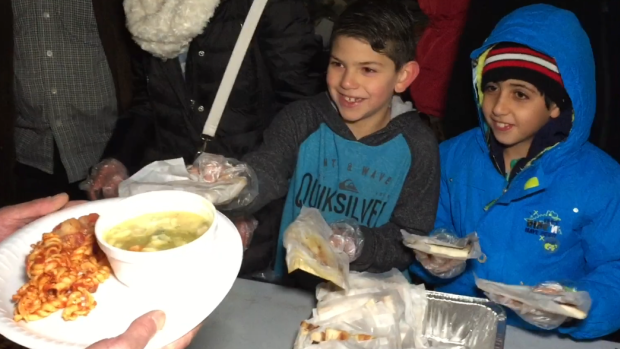 4 years ago
0:28
A group of Syrian refugees have been giving back some of the goodwill they've received themselves by feeding Calgary's homeless. 0:28

A group of Syrian refugees have been giving back some of the goodwill they've received themselves by feeding Calgary's homeless.

They hosted a special Christmas dinner near the Calgary Drop-In Centre Thursday evening with dozens of homeless Calgarians lining up for a taste of Syria, breaking down barriers with food and some small talk.

The idea was about giving back to the city that's made them feel so welcome and sharing similarities rather than differences, said organizer Rita Khanchet Kallas.

"When I hear this word for the first time, 'homeless', I think it describes people who lose their home, and we already — as Syrian newcomers — we lost our home."

As well as dishing out hot meals, the Syrians handed out Christmas gifts and cards with personal messages written inside.

The event was something many in the community of newcomers wanted to be a part of, said Ghada Alatrash with the Syrian Women's Club of Calgary, who helped sponsor the event.

"It just needed a call to action and everybody answered that call. And a lot of Syrians are very proud to be here and just show gratitude to this beautiful country."

"Canada has been a beautiful host and this is a way to give back," she said.

"We can work together to make Calgary a very nice place to live."