They are not the first and they may not be the last. A Syrian family who arrived in Calgary in February of last year has named their baby boy after the man who made their settlement in Canada possible.

'I love him, because he knows what humanity means,' mother says of naming tribute 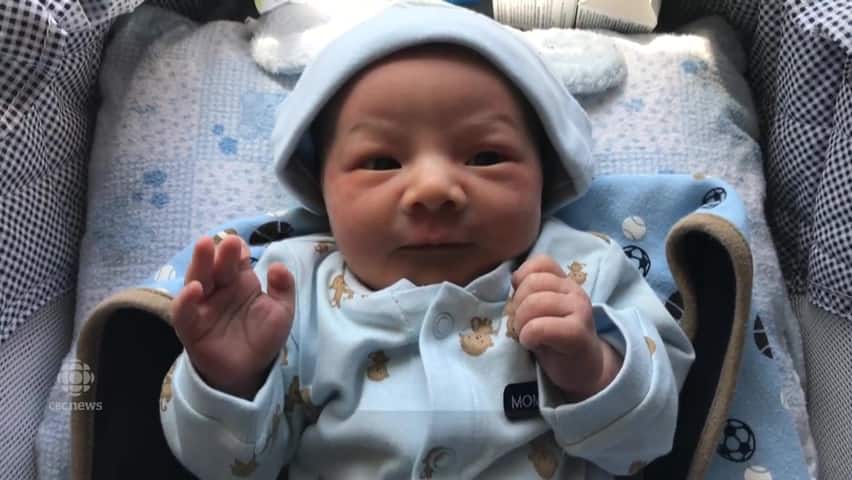 They are not the first and they may not be the last.

A Syrian family who arrived in Calgary in February of last year has named their baby boy after the man who made their settlement in Canada possible.

Afraa Hajj Hammoud and Mohammed Belal have named their son Justin-Trudeau Adam Bilal, the littlest addition to their family of five who was born Thursday, weighing a healthy 7 ½ pounds.

The parents began discussing names about two months ago.

"My husband says 'How about if we name the boy Justin-Trudeau, like him,'" Hammoud explained.

"I was a little bit shocked ... when he says that, I smile a little bit, a small smile, then I says, 'Yes, there is no problem, it will be like a small thank you for Justin Trudeau.'"

The family left Syria about six years ago, spending three years in Lebanon before arriving in Canada in February 2016.

"Our life is getting better every day," Hammoud explained.

"In the beginning was a little bit difficult because there is a big changes and now, we are OK, we are good."

She said choosing a non-Arabic name was different, but important to the family.

"It will be a big story because you know, the Arabic name and the English name, there is a big difference. In Syria we name the boys like the parents, like my father's name or my husband's father's name, but now it's by appreciation for Justin Trudeau, we name him like this."

The family is not alone in their naming tribute.

Ahmed Doso said it was out of admiration for Canada's 23rd prime minister.

"For me, he is wonderful and compassionate, I hope all leaders, whether Easterners or Westerners, would be like him," Doso said at the time.

Another newcomer family in North York, Ont., did the same thing in January and yet another "Justin" was born in February to a Syrian refugee family in Windsor, Ont.

Hammoud says it's likely others feel the same about the prime minister as her family does.

"I love him, because he knows what humanity means," she said.