A Calgary driving school is ramping up their classes by mixing defensive driving with a touch of racing school.

A Calgary driving school ramped up their classes this weekend by mixing defensive driving with a touch of racing school.

Driving fast, hitting the brakes and pretending to avoid a collision are just a few of the skills 17-year-old Elijah Cameron learned as a part of the Tire Rack Street Survival driving school.

The classes were hosted on Saturday by the BMW Club of Southern Alberta.

Street Survival driving school has been running since 2003 and Calgary's event was the first time the program had been held west of Ontario.

Josh Carter, a classroom instructor with the school, said his class is meeting an intermediate driving class need. 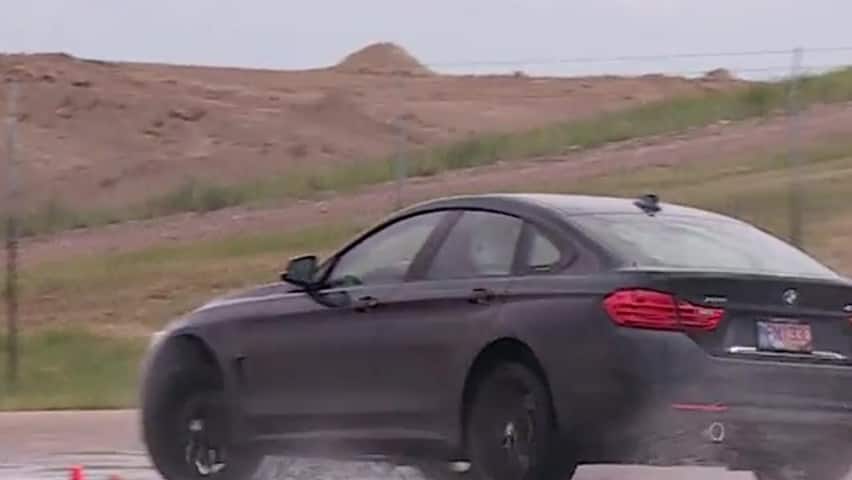 3 years ago
0:35
A Calgary driving school is ramping up their classes by mixing defensive driving with a touch of racing school. 0:35

"It's really a great course and fills a much-needed gap between that first driver's ed that you take and, if you ever wanted to take a more advanced drivers school, there is nothing in the middle, and this school really fills that gap," he said.

Carter said drivers with less than 10 years experience are learning how to handle dangerous situations like distracted driving.

"[It's] for drivers that have gotten past those first initial steps but are in that real danger zone of 'this is when I'm starting to get confident,' and usually then starting to not pay as much attention to what I'm doing and I might feel confident enough to start texting," he said.

"They made us shift, or have a distraction, while trying to avoid something and even that made me hit a couple of cones," he said.

"It really shows how that simple distraction can change whether you have a life or not."

Carter said last year alone there were 36,000 people killed in auto accidents in the United States, and it is the leading cause of death for 16- to 25-year-olds.

"And that's when that survival statistic starts to hit home," he said.

"The realization of how dangerous [texting and driving] it is and the consequences is something we really try to drive home."

Cameron's father, David, enrolled both his sons in the course. He said he was impressed with some of the real-life situations being used.

"Some of the things they're teaching them here like the awareness of space around a tractor trailer, and what that driver can really see? That's huge," he said.

Based on the success of this session, the club plans to host it again next year.