A compost facility north of Strathmore, Alta., has stockpiled 95 times more sulphur and sulphur-blended compost than it's allowed to have, Alberta Environment has confirmed to CBC News — and neighbours complain it's a stinking eyesore they want shut down. 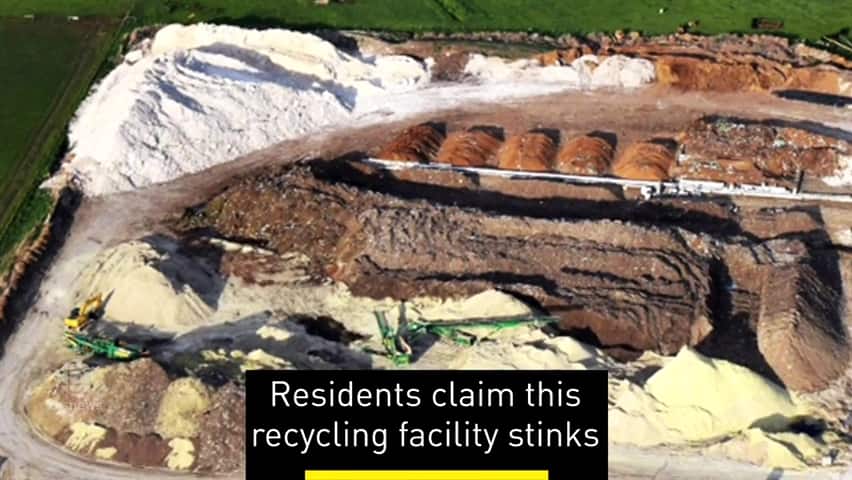 A compost facility north of Strathmore, Alta., has stockpiled 95 times more sulphur and sulphur-blended compost than it's allowed to have, Alberta Environment has confirmed to CBC News — and neighbours complain it's a stinking eyesore they want shut down.

A report set to go to Wheatland County council next week says the Bio-Can Ltd. facility contains 11,000 tonnes of drywall, 9,500 tonnes of sulphur amended compost and 2,800 tonnes of compost material referred to in the report as tailings.

The report states that Bio-Can, through Alberta Environment and Parks, is allowed only 100 tonnes of sulphur without approval, "whether it is the sulphur pile or the sulphur blended soil amendment pile."

In an email, Alberta Environment confirmed to CBC News that the company has exceeded the amount of sulphur and/or sulphur blended compost by 95 times the allowable amount without approval.

A spokesperson for Alberta Environment says the company has decided to remove the excess amount rather than seek approval to store more than 100 tonnes.

Bio-Can has not responded to several email requests to confirm those details.

Bio-Can's website describes the operation as a cutting-edge, nutrient recycling facility that accepts any commercial vehicle for delivery of organic materials.

The facility also produces what the company calls Bio-Sul Premium Plus, a fertilizer or soil amendment that contains 70 per cent sulphur.

However, people who live near the facillity say it has huge piles of crushed drywall, sulphur and other debris and produces a horrid smell.

Plastic bags and other debris drift across their fields, and the operation attracts seagulls and flies. Residents are also worried about the effect the facility is having on surface and ground water.

The Calgary-based company told CBC News it has a plan to reduce the volume of excess material and has already spent $1 million on a new composting process that reduces odours.

The Town of Strathmore and Wheatland County are aware of residents' concerns and are monitoring air quality in the area.

"To us, it's a curse," said Betty Lou Mercer, whose family lives about 800 metres from the facility.

They've watched it grow over the past 20 years from a compost facility that used to accept waste from nearby slaughterhouses to what they now describe as a dump.

"Lately, it's garbage, all this Gyproc that's come in and all the vapour barrier that goes with it and all the other stuff from construction... This isn't acceptable to have this piled up like this," said Jim Mercer.

The Mercers say that in addition to the sulphur, crushed gypsum and paper from the drywall, they've seen hoses, wires, pieces of lumber, wooden pallets, metal parts and plastic containers.

Betty Lou Mercer says the stench from the site is "horrid."

"It can be a chemical smell, a rotting vegetable smell," said Mercer.

She says once it gets into her house it's there for a while.

"You can have a bad smell one day, you get up the next day and you go into your basement and the smell is still down there," she said.

Mercer says the flies that have descended on her property can be overwhelming.

"They try to get in your ears and your eyes," she said.

The Mercers say the piles of drywall and sulphur appear to be growing.

"I don't think they're using much of it, I think it's just an excuse to have it hauled in here and dumped, as far as I'm concerned," said Jim Mercer.

Shut it down, clean it up

"I want it shut down, I want it gone," said Betty Lou Mercer.

The Mercers aren't alone. Their neighbours have joined forces to shut down the facility. Neighbours Against Pollution spokesperson Traci Riess says the group was formed because landowners in the area feel their voices aren't being heard and nothing is being done to clean up the facility.

"We've been fighting this thing for 20 years," said Riess.

She says the facility has grown beyond its footprint.

"There's excessive sulphur, the garbage, the flies, the seagulls — all of that that is going on is just not acceptable," Riess said.

The group wants all of the material moved to a more suitable industrial location.

Riess says they don't know how the facility was able to morph into what it is today. They describe it as either a fertilizer facility or an industrial landfill or both.

A fire at the facility on June 5 caused concern about the smoke that wafted from the site and how it seemed to cling to the surrounding fields. Riess says neighbours were not informed about what they needed to do or whether the smoke posed a health risk.

Riess says the facility may be having an adverse effect on property values. She says a number of acreages are on the market but haven't sold.

"We're very concerned about the impact to our own property," said Riess.

The Bio-Can facility is in Wheatland County and is located on private property that is leased from a local landowner.

The chief administrative officer for the county says a number of residents have raised concerns about the operation, but there's little the county can do because the facility is licensed through Alberta Environment and Parks.

"All we can do is work with Environment and the proponents on this site to try to get it as best we can," said Alan Parkin.

Parkin says the county has contracted out air quality monitoring near the site and the results should be known later this month.

Jamie Hanlon, a public affairs officer for Alberta Environment, initially told CBC News in an email that Bio-Can didn't appear to be operating outside of the Alberta Code of Practice for Composing Facilities.

But Hanlon later said Bio-Can was found to be exceeding its limit for sulphur storage — and the company plans to remove the material. Hanlon said if the Bio-Can doesn't come into compliance, an enforcement order would be issued to compel Bio-Can to remove the excess sulphur.

However, no timeline was given.

Hanlon said the government is working with Bio-Can regarding the "problematic odours." He said the operators have indicated that they are working on a plan to remove the odour-causing material from the site.

The compost facility is about 10 kilometres northwest of Strathmore, and the town council also has concerns about air quality. Coun. Bob Sobol convinced his council colleagues to approve spending $6,000 to monitor air quality from the Bio-Can facility.

He says the mobile monitoring station will remain in place until the town is satisfied that no danger exists.

The company that operates the facility declined to be interviewed for this story. A company spokesperson would provide answers only via email.

The company would not say how much material is being stored on site. Instead, it listed the material as gypsum, lime, sulphur, wood chips, straw and compost in various stages of processing.

Mark Grunert says the company plans to remove "residual compost material" left on site from a previous owner by March 2018.

He said the company has spent $1 million since January 2016 to improve the composting process that reduces odours.

Grunert said their plan has been approved by Wheatland County and Alberta Environment. It includes a plan to test the ground water.

She says the owners held an open house last year and promised to address their concerns, but she says the situation has only gotten worse.

Betty Lou and Jim Mercer also have their doubts.