Stampede Corral gets send off by Calgary hockey veterans

While the future of the iconic Stampede Corral venue isn’t clear, some of the people who enjoyed it back in the day took a final tour this week ahead of a Calgary Hitmen tribute just days away.

'The building was alive. There was lots of people in it, cheering us on,' Jerry Holland says

The Stampede Corral will be demolished to make way for the $500-million expansion of the BMO Centre. Although the timing isn't clear as to when that will happen, the iconic venue's place in history is well established.

Some of the people who enjoyed it back in the day took a final tour this week ahead of a Calgary Hitmen tribute just days away.

Darren Loraas was a referee in the Western Hockey League for a decade starting in 1977.

"I'm doing my third playoff game of that season. Ten minutes before the game, the door opens. It's the president of the Western Hockey League, Ed Chynoweth. He said to me, 'Good to meet you. We are holding the game up 15 minutes. We got a lineup for tickets. Have a good game.' And then he walks out. It completely unnerved me. I am 19 years old. It completely threw my game off."

Jerry Holland was a forward for the Calgary Centennials in the early 1970s.

"For me, it was exciting. We made the playoffs that year, and for me, as a rookie, it was fantastic," he said, referencing his first year in 1971.

"I was disappointed when the Centennials left. But junior hockey is thriving again. It is nice to see."

The vice-president of the Calgary Hitmen says the upcoming Corral Series, a three-game tribute to the venue's history, is about honouring the past.

It was and will be hockey at its roots.

For born-and-raised Calgarian Jack MacDonald, the Corral was part of his upbringing, and he has many connections to it.

"I go back to the '50s when I was a little kid. My dad and grandpa and I would come to the Big 6 Hockey League. They had a triple header on Sundays," MacDonald said.

"It was some of the top amateur and ex-professional players. It was pretty high calibre. Back in those days, we had the pro Calgary Stampeders. I still remember many of the players from that era, including Fred Hucul and Lou Jankowski. The coach was Gus Kyle. They were a great team. They were the farm team of the Chicago Blackhawks."

MacDonald did colour commentary and play-by-play for the Calgary Wranglers, among other teams and times.

"As a broadcasting student at SAIT, I got to cover the Centennials a little bit. Then the Calgary Cowboys. I was a season ticket holder and watched Smokey McLeod, Danny Lawson. My cousin Bernie Lukowich played on that team as well," he said.

"In 1980, there was kind of a resurrection of the Canadian Men's Olympic team, and they played out of the Corral. That was an interesting period, just before the Flames came to Calgary from Atlanta. It was just thrilling when the Flames came to town. The whole city was so proud of the fact they had become an NHL city." 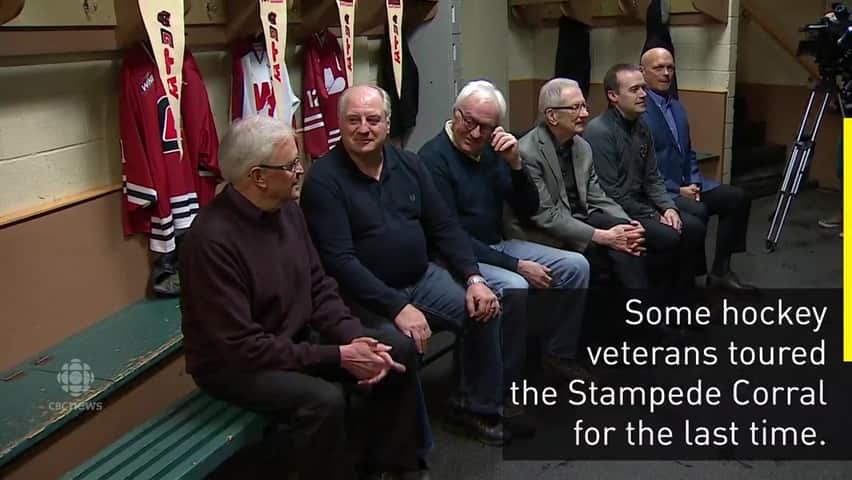 Last tour of the Stampede Corral

With files from Justin Pennell