The province gave the CBC a ground-level tour of the newly-cleared land it acquired from the Tsuut'ina Nation for the southwest Calgary ring road, and it appears the future freeway will provide a whole new way of looking at Calgary. 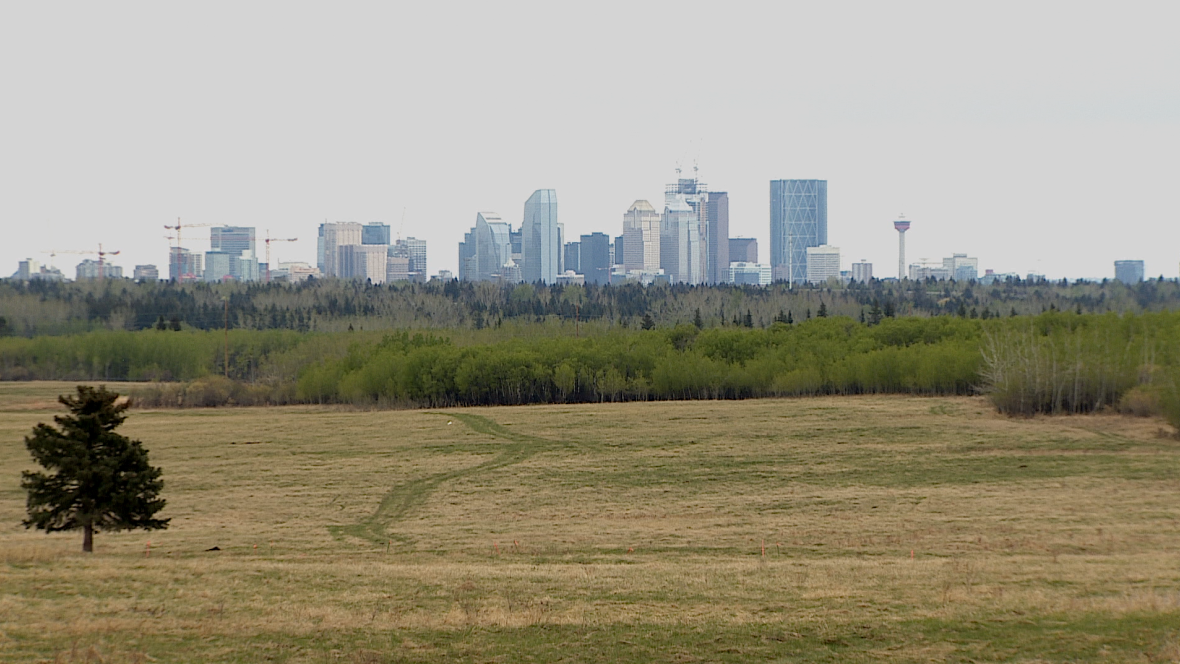 6 years ago
Duration 2:02
The province gave the CBC a ground-level tour of the newly-cleared land it acquired from the Tsuut'ina Nation for the southwest Calgary ring road.

Simply put, unless you're a member of the Tsuut'ina Nation, you haven't been on this land — and you haven't seen the view.

The provincial government gave the CBC an exclusive ground-level look at the route of the future southwest Calgary Ring Road.

Under the terms of the agreement with the Tsuut'ina, the land on the eastern edge of the reserve was transferred to the province last May.

Much of that land has now been cleared of trees and brush as the province prepares for construction.

The ring road project manager, Garry Lamb, said they wanted the land cleared before spring because of the Migratory Birds Act.

"If you have nesting birds, you can't cut down trees until the fledglings have left the nest," said Lamb.

"By doing this work early in the year before nesting season, we were able to remove a constraint from when we move into the construction phase of the project."

With the vegetation removed, the 300-metre-wide swath that the ring road will cut through the Tsuut'ina reserve is now much clearer to see.

The land isn't flat. There are wetlands and fields of mulched wood.

And with the trees gone, it offers some rarely seen views of Calgary.

Preparing the land for construction also means removing buildings on the Tsuut'ina Nation. The government paid to demolish several buildings and businesses on the land it acquired.

Work is finishing up on one of the biggest ones that had to go — the Seven Chiefs Sportsplex. The Tsuut'ina are doing that work themselves.

6 years ago
Duration 0:35
Construction manager Garry Lamb shows us where the southwest ring road will go

The First Nation also won the provincial contract to build fencing along the ring road alignment to ensure there's no confusion about the new boundaries.

"One of the reasons to fence the property boundary is to keep our contractor on our side but also to provide a visual barrier to keep people out of an active construction site," said Lamb.

That construction is coming. There are three groups bidding to build the southwest ring road.

The government intends to select the winning bid this summer. The goal is to start some construction this fall.

Under the terms of the agreement, the ring road must be completed in seven years from the time of the land transfer (May 2015) or it goes back to the Tsuut'ina.

That means there are now six years left to complete the southwest leg.

"I'm confident we're going to be able to build this project in a timely fashion and with some time to spare," Infrastructure Minister Brian Mason told CBC News.

The veteran NDP MLA also recently took a ground tour of the alignment.

"It's big, very big," said Mason. "So far, it's just been maps ... but to see it, to drive around and from point-to-point, it really is a very massive project."

While Calgarians have waited decades for this project, it's also grown in importance for the Tsuut'ina.

The ring road is a critical part of the First Nation's economic development plan. It wants retail, commercial and industrial businesses to line its land along the ring road route.

Chief Roy Whitney tells CBC News he'll be making an announcement on that in July.

"We're moving forward with an agreement with a master developer ... As the roadway proceeds, our development will also proceed, so we're very excited about that," said Whitney.

6 years ago
Duration 0:34
Construction manager Garry Lamb shows us where the southwest ring road will go

Seeing the cleared land — which used to belong to his people — has been a topic of interest on the reserve.

"People are curious to know what's happening and they want to see how it's going to evolve and be developed," said Whitney. "It will create a lot of hype and interest as we move forward over the next five years."

One big mystery that remains about the southwest portion of the ring road is the final price tag.

The previous PC government estimated the full cost of completing Calgary's ring road would be $5 billion. But that pre-recession figure included the Tsuut'ina agreement, construction costs and 30 years of maintenance.

The remaining unbuilt portion of the Calgary ring road has been split into two projects: a southwest leg that will happen first and the west leg to be completed by 2025.

The provincial government doesn't want to talk about the final estimate for building the southwest leg while it waits for the three groups that wish to build it to submit their bids.

In the spring budget, the NDP government included $2.9 billion for the Calgary and Edmonton ring road projects. No further break-down of that figure has been provided.