A massive winter storm dumped up to 40 centimetres of snow on Calgary and at least 70 centimetres in other parts of southern Alberta, causing cancelled flights and chaos on the roads with dozens of collisions and stuck cars and buses.

A massive winter storm dumped up to 40 centimetres of snow on Calgary and at least 70 centimetres in other parts of southern Alberta, causing cancelled flights and chaos on the roads with dozens of collisions and stuck cars and buses.

There are no longer any weather warnings for southern Alberta, according to Environment Canada. But a swath of the province's north is under an extreme cold warning.

The agency said the snowfall and winter storm warnings that were issued on Monday remained in effect Tuesday morning all through southern Alberta and well into the central region of the province.

Roads in Calgary were a slippery mess Tuesday morning and sidewalks were blanketed in shin-deep snow.

The snowfall tapered off throughout the day, but earlier Tuesday there were gusting northerly winds of 30 km/h with gusts up to 50 out of the north. This caused "reduced visibility in the area of the Calgary airport with visibility at three quarters of a mile," said Environment Canada meteorologist Blaine Lowry. 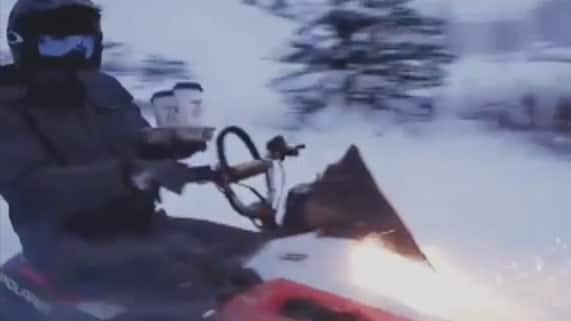 2 months ago
0:10
Plenty of cars got stuck in the heavy snow that hit Calgary on Dec. 22, 2020, but this guy wasn't going to let the weather interfere with his morning coffee run. (Video: Travis Norwegian) 0:10

Earlier in the day, blowing snow reduced the Trans-Canada Highway to single lane traffic in spots near Canmore as the snowfall and winter storm warnings persisted all through southern Alberta and well into the central region of the province.

From 5 p.m. Monday to 10 a.m. Tuesday, Calgary police said there were 54 non-injury collisions, 12 that resulted in injuries and nine hit and runs.

The City of Calgary tweeted that because the snow stopped falling around 3 p.m., it was "activating the city's 7 day snow plan."

This means snow clearing crews will focus on more "high-volume" routes such as Crowchild Trail and Glenmore Trail. After that, they will move on to Priority 2 routes, such as Kensington Road and Acadia Drive.

The city tweeted asking that people clear their sidewalks of snow and ice, and reminded Calgarians that "snow must be removed with 24 hours of snowfall ending."

Earlier in the day, city roads spokesperson Chris McGeachy said there were 59 sanders and 12 graders out clearing the snow, plus four additional contracted graders that were called in to assist.

Calgary Transit warned that many bus routes were running detours or were behind schedule and that the On Demand route between Carrington and Linvgstone was suspended.

"Due to current weather conditions expect delays and detours. We are unable to provide you with an ETA." Calgary Transit tweeted in the afternoon.

They request checking the Calgary Transit website for updates.

The storm started off the coast of British Columbia, walloped the B.C. Interior and then moved through the southern part of Alberta starting Monday. 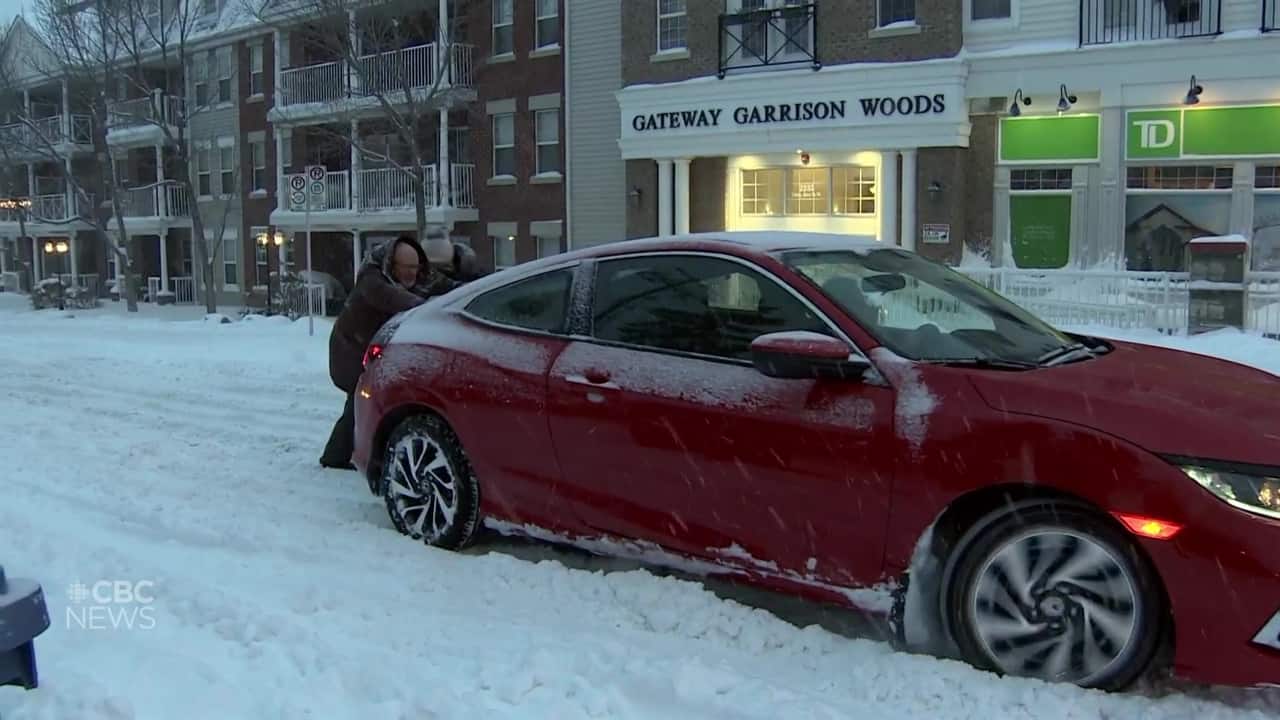 You know it's winter when...

2 months ago
0:21
These very Canadian snow vs. car scenes are brought to you today from Calgary after the city was hit with a massive dump of snow. 0:21

Calgary Fire Department spokesperson Carol Henke says when shovelling snow around a home, it's important to remember to move it away from the fresh air intake so that carbon monoxide doesn't build up inside. It's also vital to have working carbon monoxide alarms, she said.

"If you are exposed to CO gas, you may get flu-like symptoms such as headaches, nausea and dizziness, as well as become confused, tired and lose consciousness," the statement read.

"If you or anyone in your house experiences the symptoms of CO poisoning or your CO alarm goes off, you should leave your residence and call 9-1-1. Do not go back into the house until the Fire Department tells you it is safe to do so."

In the morning while the snow was still falling, Environment Canada said motorists should consider postponing non-essential travel.

At around 8 a.m., RCMP warned motorists to avoid travel on Highway 40 in Kananaskis Country west of Calgary.

"Road conditions are extremely poor due to accumulating snow and poor visibility," a release said.

Shortly after that, Canmore RCMP also advised against non-essential travel on Highway 1 west from Exit 114 to the Banff Park gates, saying road conditions are poor with single-lane traffic in both directions as road crews work on clearing drifting and blowing snow.

The Calgary International Airport warned travellers that the storm could affect flights and that they should check with airlines on departure and arrivals times and leave extra time to get to the airport. A couple of arriving flights had to be diverted to Edmonton on Monday night because of the snow, the airport said.

Kyle Brittain, The Weather Network's Calgary bureau chief, said the storm system is expected to move through Saskatchewan and Manitoba later on Tuesday and reach Ontario by Wednesday.

"It's kind of like this gift from Mother Nature, if you will, for folks hoping for a white Christmas," he said.

Calgarian Williams Chirinos, who was out shovelling to make room on the street to park his vehicle, said he really didn't mind the snow.

"Actually I feel quite well, because I think we need to have a white Christmas," he said. "It's OK, no big deal." 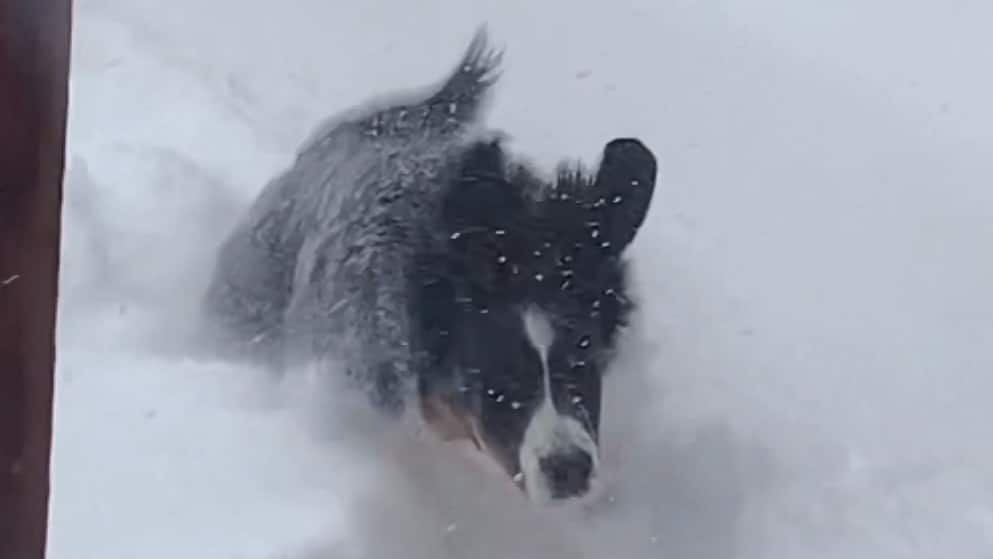 Check out more of the great pictures people have shared: