Medicine Hat is shutting down its solar thermal power plant because it's far cheaper to use natural gas.

A concentrated solar thermal (CST) plant seemed like a good idea at one time — circa 2009 — but this week, the city of Medicine Hat pointed its solar panels down, shuttering the facility after five years of operation.

Collin Gallant, a reporter at the Medicine Hat News, said Wednesday in an interview with the Calgary Eyeopener that the plant wasn't a bad idea gone wrong, but rather a victim of persistently low natural gas prices.

"Back when this was thought up as an energy savings program, natural gas was about seven times more expensive than it is today," Gallant said.

The plant cost approximately $12 million, with half of that coming from the City of Medicine Hat, and $3 million from both the province and federal government.

Back in 2014, when it opened, Medicine Hat Mayor Ted Clugston was bullish on solar thermal energy. 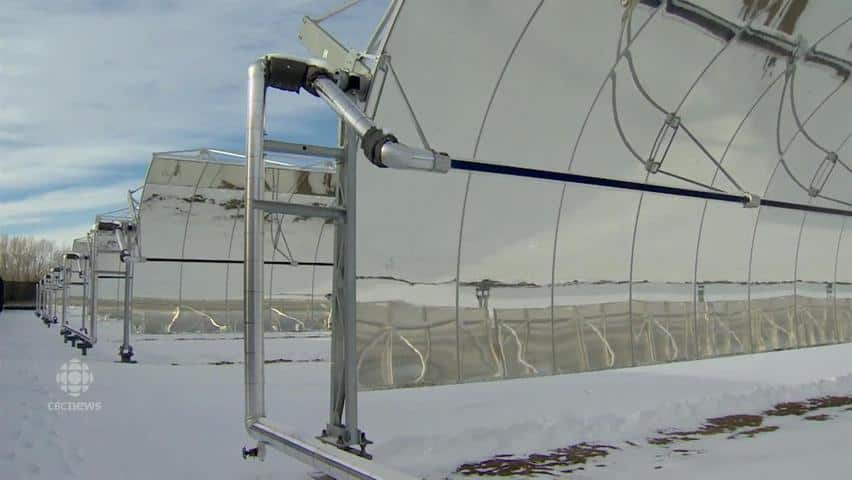 6 years agoVideo
1:57
Medicine Hat now operates a solar thermal power plant. It's the first of its kind in Canada. 1:57

"The idea behind this project is helping to save gas — some day we will run out of it," Clugston said.

Even back then, Clugston acknowledged that the plant made no financial sense because it produced only one megawatt of electricity on an ideal summer day, and the city was not as flush with cash in 2014 when it opened as in 2009 when it launched the project.

The technology that the plant utilized is commonly used in the southern United States. According to Gallant, Medicine Hat's city council tapped into a federal innovation fund in 2008 with a pitch to locate a solar thermal power plant in one of Canada's sunniest cities (2,544 sunshine hours and 330 sunny days a year, according to the City of Medicine Hat website).

As the northernmost CST plant, Medicine Hat's facility provided Alberta Innovates with a significant sample size of data — the deal was that it would provide five years' worth — said Cal Lenz, Medicine Hat's commissioner of energy and utilities, in a release.

"Medicine Hat took a bold step with the project, coming up with the idea at a time when gas prices were extremely high," said Lenz. "Innovation takes valiant moves, and this project is certainly an example of the city's leadership as we continually explore energy solutions."

The city didn't announce any plans for the plant, other than to say that council would be presented with options in the fall.

Gallant said the plan might be to keep it shut down but intact, in case gas prices escalate, thus making CST-generated energy economical again.

"It's been built, it works, but the decision right now in Medicine Hat is just to mothball it until natural gas prices go up again," Gallant said.

The challenge is that natural gas prices have remained stubbornly low and there's no timetable that sees them rising to a level that would make operating the plant economically feasible in the near term, he added.

"I think they said that at the size it is now it would take gas costs of about $19 or … $20 a gigajoule to to make it economical again," Gallant said.

Maintaining the plant without running it presents challenges, as well.

"There's some costs in keeping it clean," he said. "There are very large mirrors involved. There's maintenance — it is a pressure system and extreme pressure system so it has to be recertified every now and then.

"The idea is that they're going to mothball it, although I've heard tell they're looking for options for it — there's private industry that might need heat, [and] it does produce a lot of heat."

The project, Gallant added, is one of a number of sustainability-oriented projects initiated by Medicine Hat.

"The City of Medicine Hat has a fairly forward thinking about renewable energy. We've had a solar home subsidy grant here for about 10 years," he said, also noting wind purchase contracts, home turbines and other renewable projects.

"We're 'The Gas City,' but that allowed us to do some interesting things here."

While the project cost Medicine Hat more than the original plan (which was targeted at $9-10 million), and was already uneconomical by the time it opened in 2014, Lenz said it's no sustainability flop.

"Innovation may not always lead to commercialization, but it does provide valuable information for further endeavours. These learnings will help advance the next evolution of cost-effective, energy-saving initiatives," said Lenz in a news release.

"The provincial and federal governments chose our city to lead the project and foster learning about this technology, and this objective has been successfully achieved."

Stephen Hunt is a digital writer at the CBC in Calgary. Email: stephen.hunt@cbc.ca