A professional snow shoveller has advice on how to improve the much-detested chore.

'If you're fighting the wind, you're in for a tough haul,' expert Jon Stotz says

Snow is on the way again, and that means more shovelling.

The Calgary Eyeopener turned to a professional snow shovelling service for advice on how to improve the much-detested chore.

Environment Canada is forecasting flurries for Thursday and Friday in the Calgary area.

Jon Stotz from Superyards — a Calgary-based company of self-described "snow removal enthusiasts" — works on commercial and residential properties, and has a few tips to make homeowners' lives easier.

"You have to have some kind of plan. You have to know where you want to push the snow to," he said, while digging out a snowy sidewalk in northwest Calgary.

Stotz pushes the snow in long strips onto a lawn or other space, and then in angled strips into a pile.

"In the wind, there's also another trick. You gotta work with the wind," he said. "If you're fighting the wind, you're in for a tough haul."

No 'twisting and torquing'

The key is to do straight lines — and lift your shovel forward toward your snow pile. You don't want to carry it to the pile and then dump it out by "twisting and torquing your back," he said. 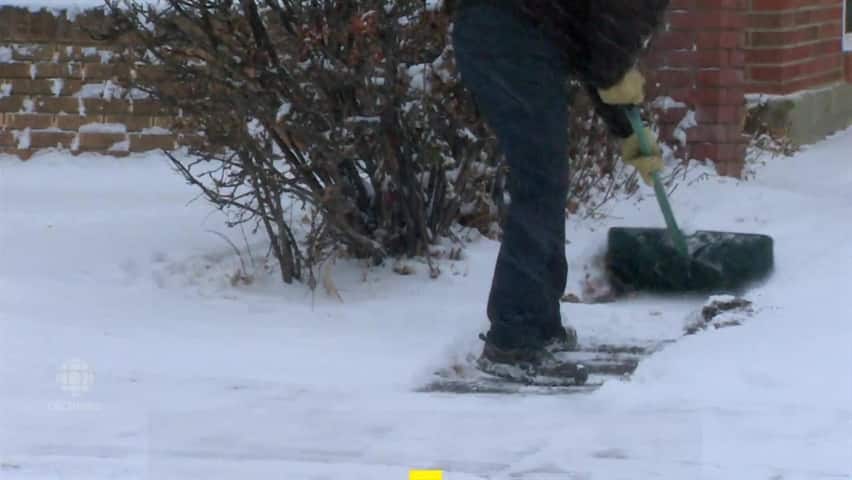 How to shovel snow properly

3 years ago
0:32
An expert shares tips on how to be most effective while protecting your back 0:32

"A pro tip is, the less turning and torquing with your back, the better off you are," Stotz said. "Kick-lift the shovel. Don't twist-lift because it's going to hurt your back."

And yes, he says snow blowers and other equipment can make it easier. But when you have a small space, those sometimes aren't worth the trouble. Instead, Stotz relies on his trusty, low-tech shovel.

"I don't breathe any fumes and the snow goes where I want it to go," he said.

With files from Paul Karchut and the Calgary Eyeopener