A southwest Calgary couple has found an inventive way to skip the lines at the ski resort this winter by turning their backyard into their own ski hill.

Backyard bunny hill is perfect for sledding and learning to ski 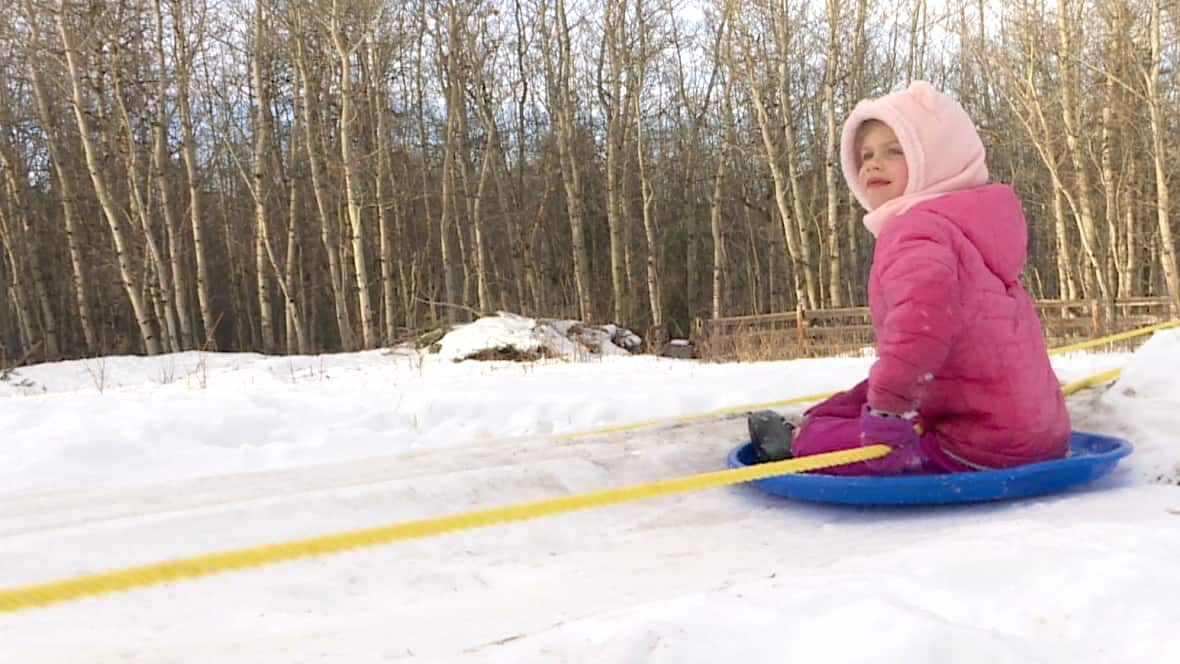 Family builds their own backyard ski hill, complete with a tow rope

10 days agoVideo
1:08
This Calgary-area family decided to skip the lineups by creating their own little ski hill. 1:08

A southwest Calgary couple has found an inventive way to skip the lines at the ski resort this winter by turning their backyard into their own ski hill.

One of the creators, Heather Park, says she suggested the idea so their three young daughters could keep busy this winter since so many activities are closed.

"Like all parents, we had a bit of a concern with winter coming up and worried that we wouldn't have a lot to do if we came into a situation where there was going to be a lot of lockdowns," she said.

"So we have a great little slope in our backyard and it's perfect for kids to learn how to ski on."

But because it's not all that easy to get three little girls up a hill, they added a tow rope to do the job for them.

"Essentially, the kids can grab on to the rope at the bottom and then it will just pull them up. And to be honest, it's a lot faster than we anticipated. We thought it might be a slow pull up, but they get up there pretty quickly," she said.

Her husband, Ian, who is a mechanical engineer, designed and built the contraption by using a three-horsepower motor, yellow rope and a pulley system.

He says it took him about 30 hours and a lot of trial and error to get it working right.

"The first thing we realized when I first plugged it in was that it was going way too fast," he said. "So I had to create this little pulley mechanism here, a belt drive so the kids could grab a hold of it and it didn't whip you up the hill."

And the pulley works for adults, too, says Heather.

"We would probably struggle to put a couple of adults on at a time, but we can do an adult and a couple of kids, and we can do a number of kids on at the same time, as well," she said.

The couple is now looking into ways to keep the hill in good skiing shape.

"You need the right kind of snow so you don't want too deep and you don't want it too hard and too crusty. So we're in the process of working on trying to find a grooming machine and coming up with the idea for that," she said.

But until then, toboggans are helping flatten the surface, Heather says.

"For now, we're just using our children and their grooming machines and sending them down on their toboggan so it floods out the snow and makes it better quality."

Fun for the neighbourhood

Heather says the goal was to open up the hill  to others in the community, which they plan on doing once restrictions are lifted.

"We fully understand how challenging it is when you have little kids and you're running out of ideas and there's only so many crafts you can make with toilet paper rolls," she said.

Sadly, the backyard ski hill won't be a yearly tradition for the family as they've put their acreage up for sale. However, Heather says the buyer would get the tow-rope contraption included.

"I think we'd have to leave it for no other reason than my husband has no desire to have to ever disassemble it and move it and set it up," she said.

"Obviously, the hill is already there, so, yes, if anyone wanted to buy the house, it would come with it."

With files from Terri Trembath and the Calgary Eyeopener.