Scientist calls U of C energy centre a failure

The former director of a group within an energy research centre at the University of Calgary is calling the centre a failure.

Former director of group within Institute for Sustainable Energy, Environment and Economy speaks out 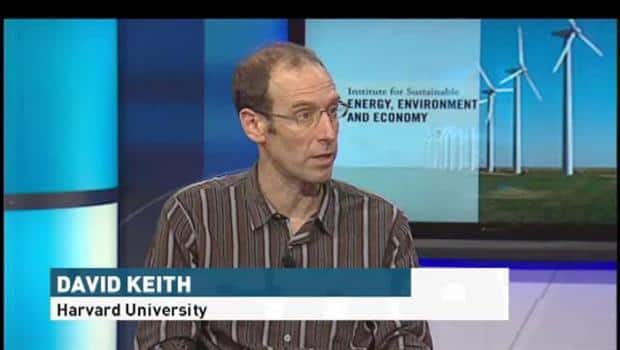 Scientist calls U of C energy centre a failure

The former director of an interdisciplinary research group of an energy research centre at the University of Calgary is calling the centre a failure.

Climate scientist David Keith says the Institute for Sustainable Energy, Environment and Economy is critically important, but has not been able to balance the interests of private industry and environmental advocates.

Keith says the university for example, removed an academic at the request of Enbridge.

"That just fundamentally misconceives the university's role," says Keith who is now a professor at Harvard University in the United States.

Meanwhile, Liberal leader Raj Sherman is calling for an investigation.

"The Integrity of one of our top institutions has been brought into question by a highly respected individual," Sherman says. "This needs to be looked at."

Enbridge released a statement to CBC saying the company was not involved in the recruitment process, the appointment nor changes to leadership roles at the university and "any claims to the contrary are categorically false."

He adds poor management on the part of the university, which took too long to make important decisions about the Institute, contributed to its failure.

U of C issues statement

In a written statement to the CBC, the University of Calgary says the centre was created to develop cost-effective solutions to the environmental challenges of energy production and use.

"We believe ISEE is delivering on that mandate," reads the statement.

On Wednesday, the U of C issued the another statement from president Elizabeth Cannon:

"The University of Calgary believes in and supports the academic integrity and independence of scholarly inquiry that is the foundation and core value of great universities.   Balancing the views and interests of the academy, industry, government and non-governmental groups is not always easy, and often there are conflicts and disagreements.  We believe that a university offers a valuable forum for debate, collaboration, and ultimately, ground-breaking research to address the significant challenges facing our society and our world.  The University of Calgary’s belief in independent scholarly inquiry and academic freedom guides us when there are conflicts. The university’s executive is committed to continuous improvement in academic and administrative leadership and management.

The University of Calgary is moving forward with an ambitious agenda to become one of Canada’s top five research universities.  Our Eyes High strategy was launched at the end of September 2011 after extensive consultation with faculty, staff and students.  During the 2011 – 2012 academic year, with extensive input and consultation from the academy, the university developed an Academic Plan and a Strategic Research Plan.  The Strategic Research Plan identified six themes, one of which is "Energy Innovations for Today and Tomorrow."

Beginning in 2012, the university began developing an interdisciplinary energy research strategy with extensive input from, and consultation with, the internal academic community, the energy industry and government. The strategy builds on existing research strength at the university, led by more than 200 researchers in a wide range of disciplines, including science, engineering, law, economics, health, management and public policy.

An independent panel of international academic experts will be asked to review the strategy to ensure that it is of the highest calibre and at a global level.   Effective September 1, 2011, David Keith, a respected academic and researcher, resigned from the University of Calgary. He stepped down from his full-time professorship and accepted an appointment with Harvard University in applied physics and public policy. He remains an adjunct professor in the Physics and Astronomy Department at the University of Calgary, and is a visiting fellow at the Institute for Sustainable Energy, Environment and Economy (ISEEE).   On November 15, 2012, the University announced that ISEEE was moving into the Faculty of Science and that its future direction would be determined within the context of the emerging energy research strategy. While ISEEE has had successes, there have also been challenges.

We believe that more closely aligning the activities of ISEEE with our Energy Research Strategy will lead to greater success for all involved.   All of us — academics, industry, government, NGOs, and community leaders — have a role to play in addressing societal challenges.  This requires collaboration and mutual respect. The University of Calgary values the support of our many industry partners, including Enbridge.

The Enbridge Centre for Corporate Sustainability in the Haskayne School of Business is designed as an incubator for the research and development of business practices that account for social, environmental, and economic considerations. We are proud to partner with Enbridge on this important initiative.  The Centre’s terms of reference make it clear that it will at all times operate within the mandate of the university for independent scholarly inquiry and academic freedom.   We believe that the University of Calgary can create neutral ground for impactful and relevant research and education.  We welcome all perspectives, including constructive criticism, to help us better deliver on this commitment to our students, faculty, staff and all Albertans."