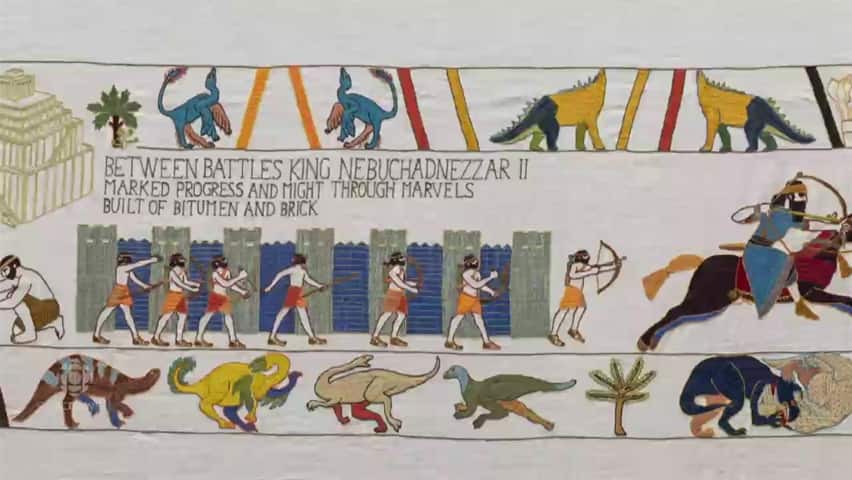 3 years agoVideo
0:34
When it comes to creating two-block-long pieces of art that take nine years to complete, medieval European craftsmen have nothing on Calgary artist and filmmaker Sandra Sawatzky. 0:34

When it comes to creating two-block-long pieces of art that take nine years to complete, medieval European craftsmen have nothing on Calgary artist and filmmaker Sandra Sawatzky.

That's because Sawatzky turned back the clock for her latest project, the Black Gold Tapestry, to around the 15th century, where she took inspiration from the Bayeux Tapestry, a 67-metre (220-foot), hand-embroidered narrative of the Battle of Hastings in the 11th century.

For Sawatzky, the notion of using the format of the Bayeux Tapestry to tell a Calgary story that's also a global one was appealing — even if it was going to have to chew up a sizeable chunk of her life to get done.

"I thought wouldn't it be neat to do something like a story — a film on cloth? And so that's what I did," Sawatzky said on the Calgary Eyeopener on Monday.

The Black Gold tapestry is being installed at the Glenbow Museum, where it opens to the public Oct. 7. It will be on display until May 21, 2018.

"This story affects everybody on earth in one way or another," Sawatzky said. "I live in Calgary ... and although I had some connection with [oil and gas] — I had done training videos for the oilpatch — I didn't know very much about it.

"I really wanted to capture a story that would keep my interest, and there would be lots to look at, and it would be worth spending one sixth of my life on making it," she said.

They say a journey of 10,000 miles starts with a single step.

For Sawatzky, a journey of nine years, creating a tapestry that's two city blocks long, started with a single panel.

"The first panel that I stitched, I only bought enough fabric for that panel. I had enough money for that piece," she said.

Things got complicated when Sawatzky went shopping for more fabric in order to continue the project.

"When it came (time) to do the other panels, I had to buy other fabric, because I couldn't find that fabric," she said.

Finding matching fabric was just the first obstacle she faced, too.

"Just sourcing the yarns, the colours then doing the research. It took a year of researching and drawing," she said. "I did a cartoon first. There's a 220-foot, pen-and-ink drawing before I did the piece and started to stitch it. Then I had to transfer it."

Nine years later, she's installing it at the Glenbow, along with those pen-and-ink drawings and other pieces of the puzzle that she accumulated over close to a decade's worth of work.

"I'm somewhat driven," Sawatzky said. "I have the skills to do it and the will to do it."