The boulder that rolled over Ryan Titchener, shattering 14 ribs and breaking his spine, had likely sat motionless in the mountains of southeastern British Columbia for thousands of years before he rested his hand on it.

'I didn't want to die in front of my girlfriend. I wasn't going to let that happen,' Ryan Titchener says 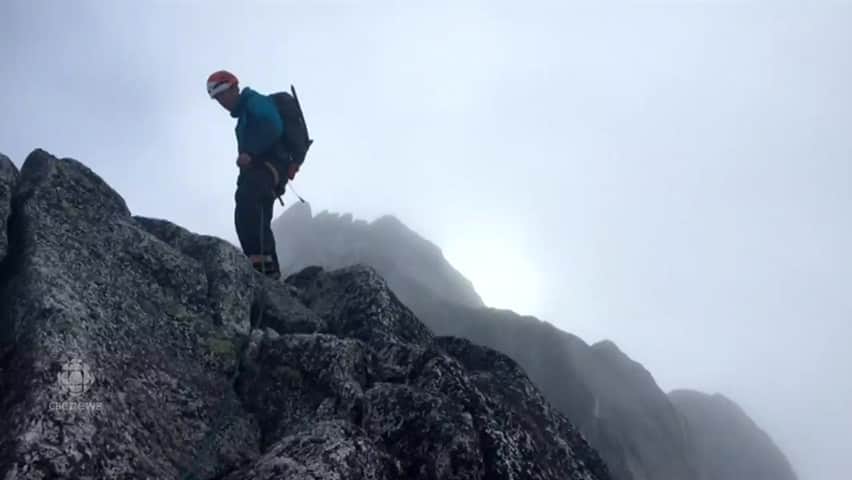 4 years ago
0:59
Ryan Titchener was preparing for his final test to be a mountain guide when a loose boulder changed everything. 0:59

The boulder that rolled over Ryan Titchener, shattering 14 ribs and breaking his spine, had likely sat motionless in the mountains of southeastern British Columbia for thousands of years before he rested his hand on it.

That light touch was enough to dislodge the 300-kilogram hunk of granite from its perch below Pigeon Spire in Bugaboo Provincial Park, as the 32-year-old apprentice mountain guide from Jasper, Alta., made his way down a notch on the approach to the final peak.

"It was about the size of a washing machine — it was a big boulder," Titchener said. "I never thought it was going to fall or slip."

Incredibly, though, the rock shifted when he put just some of his weight on it as he made his way toward his girlfriend, Tereza Turecka, who was acting as his "client" that day.

The pair had set out in the early-morning hours of July 15 to summit Pigeon Spire as an exercise before Titchener's full-certification exam with the Association of Canadian Mountain Guides, a designation that takes years to achieve and would set him on a career path he had dreamed of all his life.

But that dream was shattered in an instant, when the rock gave way.

"I started tumbling for about 10 metres and I smashed my head into the depression down below very violently," he said.

"At the same exact time, that boulder — that huge boulder — rolled over me and continued on down the mountain.

"I was paralyzed. I knew right away."

Seconds earlier, Turecka had been taking a moment to drink in the mountain vistas of the Bugaboos: the sharp spires, the rolling ridge lines and the cascading glaciers.

"I just remember being overwhelmed by the surreal views of that place," she said. "I was just really happy to be there and it was one of those perfect moments.

"And then I remember turning around and looking over at where Ryan was, and what I could see was just that fraction of a second where Ryan was being rolled by the boulder.

"I saw the awkward angle of his head, the massive boulder crushing him against the rock, and at that moment I didn't believe he was going to live. I just expected his dead body to roll down to the ledge with me."

Titchener was surprised, himself, to be alive.

He came to a stop, upside down, with one foot wedged in a crevice and his climbing harness hooked around a horn of rock.

The boulder had shattered 14 of his ribs and broken two vertebrae. One of his lungs had collapsed and was rapidly filling with blood.

His climbing helmet was fractured in the fall, but his head came out relatively unscathed. He was alert and conscious as Turecka — an experienced alpinist herself — ran him through basic tests for brain injury.

"Ski patrol mode kicked in for me immediately," she said. "Even though it was my loved one, panic wouldn't help in that moment.

If the loose boulder was a spot of bad luck, Titchener credits the next 13 hours as a series of fortunate events that helped save his life.

He said the fact he didn't fall farther down the mountain, alone, was lucky.

The radio in his backpack also survived the fall, giving Turecka a chance to call for help.

That radio signal reached a custodian at a nearby Alpine Club of Canada hut who happened to be listening at the time.

The distress call then made its way to a search-and-rescue team out of Golden, B.C., that was out on a practice exercise of their own, only eight kilometres away.

"And I remember thinking in my head, it's not fast enough. I needed help right away ... but I've been a rescuer before and helped out in several situations and I know these things take time. I knew I just needed to concentrate and control my breathing and relax."

In the meantime, Turecka had wrapped him in a tarp and as many jackets as they had. Keeping him warm was especially important, as a snow storm had started to roll in.

"Minutes after the accident, toonie-sized hail chunks were coming down, pounding down on us, all around us," Titchener said.

'I didn't want to die in front of my girlfriend'

He admits the worst-case scenario crossed his mind, from time to time.

"I can't lie. There was that feeling that I was going to die. But I didn't let that overwhelm me," he said.

Eventually, the thumping sound of helicopter blades could be heard in the distance, and Titchener said it felt like his "guardian angel" had arrived.

The aircraft flew past at first, looking to set up a staging area from which rescuers could climb to Titchener, because the conditions were too challenging to fly directly to him.

"But the weather seemed to have a bit of a break in it at that moment and the helicopter pilot made that decision to go for it," he said. "Next thing you know, we heard those blades come back."

The helicopter flew directly overhead and two rescue technicians dangled on a long line as it descended.

"They landed down right next to us," Titchener said. "That helicopter pilot had that precision to drop those guys perfectly next to us — it was unbelievable — despite the bad weather."

The team flew Titchener to the valley below, where a larger helicopter was waiting to take him to hospital in Golden.

"At this point I had not received any pain relief at all," he said.

"I was fully conscious and I could feel every little bit of pain. Every ounce of it was running through my body. It was excruciating. And I definitely was holding on for life, the whole time."

At the hospital, Titchener said, doctors pushed a tube into his collapsed lung and drained nearly 1.5 litres of blood from it, right in front of his eyes.

They then prepped him for transport to a more advanced trauma unit in Calgary, but with lingering bad weather, a helicopter was unable to fly him there.

"They told me they were going to drive me and it was going to get bumpy," he said. "It wasn't going to be comfortable."

He eventually arrived at the Foothills Medical Centre at 10 p.m. that night.

After numerous tests, Titchener said he was diagnosed with a cracked T2 vertebra and a vertebra lower down in his spine that was in much worse shape.

"My L3 in my lumbar had actually exploded," he said. "They needed to piece it back together and fuse my L2 and L4 together with my L3 as one, large, solid mass now, to protect my spine, to make it one large vertebra, essentially."

His spinal cord had been badly injured, but not severed, giving him hope.

"The prognosis is that I'm a paraplegic with a very long road ahead of me," he said.

"If I want to walk again — or even have the use of ankle braces and a cane — that's going to be a mountain in its own to climb. I'm going to have to work hard in order to get that. As of right now, I lie in my bed every night and every day and think about that."

And while he has long-term plans to walk — and climb — again, Titchener has a more short-term goal in mind, too.

He's set to be the best man in a close friend's wedding in Jasper, where he lives, in late August.

"I plan on making that wedding and honouring my promise," he said.

"I may be in a wheelchair, obviously, for most of it, but I will do my best to stand next to him in that suit that he bought me and honour my friend and honour his fiancée and watch those two get married."

"I was like, man, what am I going to do with $10,000? I don't need that money," Titchener said. "But then I started to realize afterwards the financial burden that becoming paralyzed will have on not just myself, but on my family and on my loved ones."

Titchener has already begun physiotherapy, and Turecka said she's amazed by his rapid progress — he has already managed to stand on his legs, with help from others — and by his relentlessly positive attitude.

"I've always known he's an incredibly strong man," she said. "I've always looked up to him as a guide, as a person, as an extremely positive person who can inspire others in whatever they're doing in their lives.

"My breath is taken away by how strong he is now. Most people would have just broken down and fallen into a deep depression and wouldn't know how to deal with this," Turecka added.

"As much I've tried to support him in the hospital, it's mutual. We're there for one for another. He's just stayed incredibly strong."

For his part, Titchener said he sees little choice but to stay positive and work as hard at his recovery as he was working toward his full certification as a mountain guide.

He keeps his crushed helmet by his bedside as a reminder of how differently things could have turned out.

"I'm pretty damn lucky that I didn't end up with a traumatic brain injury and all I have is a broken back and no feeling below my knees," he said. "It could have been a lot worse than that."

As for those longer-term goals, Titchener said he hopes to return to the spot where the boulder gave way, and finish the ascent.

"I want to reach the summit of Pigeon Spire one day," he said. "It's not by any means the hardest mountain in the world to climb, but now, it is for me.

"This is now my Everest."