Calgary was battered even before the COVID crisis struck, with empty towers, high unemployment and not many solutions in sight. Now, it faces a unique set of challenges that calls for even more help from the province and Ottawa.

Those efficiencies, of course, saved the bottom line of many large oil and gas producers and their investors, but they also drove up the city's unemployment rate to one of the highest in the country, even as the rest of Canada flourished.

The price of Canadian oil remained mired in the muck.

Then, Saudi Arabia and Russia started a price war on oil. Then, a global pandemic struck. A city that was already scrambling for solutions to a multi-year economic slump now faces an almost-impossible-to-grasp mountain of challenges.

As Mayor Naheed Nenshi said after the Stampede was officially cancelled, Calgary needs help from other governments, but it needs more than a cookie-cutter, Canada-wide solution.

Calgary the Brash, now on its knees, needs its own tailored solutions.

Even before the price of Canadian oil sank below the teens, Calgary's skyline was a mirage.

Office vacancies in the downtown core hovered over 20 per cent as oil and gas companies abandoned leased spaces, consolidated offices, shut down or shed staff. Floors of towers sat empty. All 37 storeys of the Nexen Building were completely emptied out.

The city has long boasted the most head offices per capita in Canada and built out its downtown to show off that financial heft. But behind the braggin' rights was a fatal flaw: 73 per cent of those head offices are energy and oilfield services companies, according to Calgary Economic Development.

So when the price of oil first started to collapse in 2014, those in the boardrooms started looking around for efficiencies from the days of $100 barrels and found plenty.

The vast majority of those jobs are not coming back.

"We have about enough office space for a population of about four million people," says Mary Moran, the CEO of Calgary Economic Development.

"On a per capita basis, we have double Toronto, triple Houston, Denver, Austin. We built office towers based on energy companies, and I think … most CEOs would say that they're not going to be the mega job creator that they were in the past in downtown Calgary."

That sort of gap doesn't just affect employment prospects or the bottom line of property companies, it touches every aspect of the city's finances.

The value of the downtown towers, thanks to their hollowing out, has fallen by about $14 billion since 2015. That means the tax the city is able to collect on the towers has also fallen, to the tune of hundreds of millions of dollars.

The city, hamstrung by provincial rules, must collect its needed property tax revenues elsewhere, which means some businesses outside of the core have seen their taxes skyrocket, even if they weren't exactly having banner years.

Council also belatedly started to tilt the property tax balances so that businesses weren't essentially subsidizing low residential rates. But even then, those residential property values have been falling and have now been slammed by the COVID crisis.

Placing Band-Aid upon Band-Aid, the city has reached into its reserve funds in order to soften the blow of those tax increases, but that solution can only go on for so long.

The city also slashed its budget, the most recent of which included $60 million in cuts in order to stave off taxing businesses out of business.

All of this was before the pandemic.

So what's left to do? Where does a city — which can only collect property taxes, fees and a portion of fines — find money when the unemployment rate soars, businesses are shuttered and the driver of its economic success needs a bailout?

What the city wants

Mayor Nenshi says the city is looking for five things from the other levels of government:

That's because the city is facing a budget shortfall of $400 million this year, depending on how the pandemic continues to play out, but it's not allowed to go into debt like other levels of government.

It had over $2 billion in reserves in 2018, but less than half of that could potentially be used for any budget shortfalls and that would fly out the door fast and leave the city vulnerable. 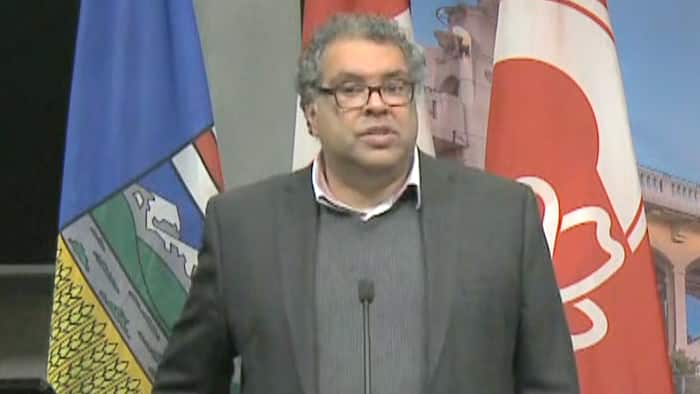 10 months ago
2:57
Calgary's budget shortfall could balloon to $235 million if the shutdown stretches to the end of the year, and that doesn't even include burdens borne by those like the Calgary Police Service. 2:57

The city wants immediate cash to get shovel-ready projects built in order to keep people employed and build needed infrastructure, and it wants to speed up the timeline on projects that were scheduled for further down the road.

Moran and her organization have been pushing a plan they call Calgary in the New Economy, formulated in the wake of the first oil price crash. It aims to attract new industry, specifically tech enterprises, to the city.

But this plan, even if successful, is not a quick fix. Moran estimates it would take at least 20 years before an Alberta tech renaissance would be able to absorb all the empty office space in Calgary's core.

Paradoxically, those empty towers do hold some hope for a city facing its reckoning.

Because empty space means cheap rent, which may not be the best news for those who own the towers, it does offer some incentive to companies looking to establish themselves or to relocate.

There are plenty of rooms with a view for a reasonable price.

The cost of living in Calgary is relatively cheap and the province and city, whether pragmatic or not, has some of the lowest taxes anywhere on the continent. There is an extensive transit system, pathways along clean rivers and mountains on the near horizon.

And because Calgary took its first serious blow in 2014, it has had time to sit and think about what it wants to be when it grows up and how to get there.

It even managed to set aside $100 million in order to attract tech businesses to the city and has about $77 million still left in the pot.

Moran says research by Calgary Economic Development prior to the pandemic showed there could be tens of billions of dollars of investment in tech in the province over the coming years, building a sector that would require 77,000 workers.

"We have half of that right now," she says.

So, there is a chance, and certainly the stereotype of the city as a place that always dusts itself off has some foundation in reality, but Calgary has also never faced something quite like this.

While there were always busts after the booms, there's never really been a full-blown implosion at a time when everyone, almost everywhere, is reconsidering the future of energy on the planet.

So there's promise, but there's also the need for patience to see a full return on those hopes and dreams. And let's face it, Calgary has never really been known for its patience. And there's no guarantee it can take its talent, its youth and all those other strengths and use them to transition into a very different economic beast.

Moran and Nenshi both say they will need the federal government and the provincial government to help achieve this transition.

In the case of the province, that could prove challenging.

The United Conservative government came to power promising action on jobs, the economy and pipelines, and has doubled down on support for the oil and gas industry while cutting tax credits for technology companies in Alberta.

Moran is diplomatic about the prospects and says the government is right to stand up for the energy industry and to maintain the so-called Alberta Advantage of a low-cost business environment.

"But we do require [tech] companies here to grow and to retain those companies. You know, there were tools in place like the investor tax credit, which made us competitive with all the other jurisdictions," she says.

"And at this point, we find ourselves uncompetitive in that regard."

It's not clear whether that can change, especially considering the fiscal hawks of the UCP government are staring down a deficit that could reach $20 billion this year alone.

Economic forecasts of just a few short months ago seem quaint and disastrously outdated now. The provincial budget itself was predicated on royalty revenue projections that are demonstrably out of touch.

And no one foresaw the cancellation of the Stampede, which removed about $500 million from the economy in one fell swoop, in addition to the Folk Fest, Sled Island, and on, and on.

In short, it's almost impossible to predict what's just around the corner as the pandemic continues to wreak havoc, as does the bottom of the barrel price of oil.

But it is clear that Calgary is in trouble.

Part of that is because it did what it has always done, overbuilt, overreached and continued to gamble on nothing but luck — that the boom would last, that the oil would flow, that our natural heritage would continue to fuel bigger and better towers and cars and bars and restaurants and houses.

But this is something completely different, and there's no magical solution. So the city will go cap in hand in order to try to build something new. Time will tell if its famed entrepreneurial spirit is actually up to the task.