He smuggled 2 young boys out of Laos in 1977, now they've reunited

It was a second reunion almost 40 years in the making. This weekend in Calgary, a B.C. missionary and his wife reconnected with a family they had reunited in 1977.

Now a father himself, man seeks out the missionary who brought him and his brother to his parents in Canada 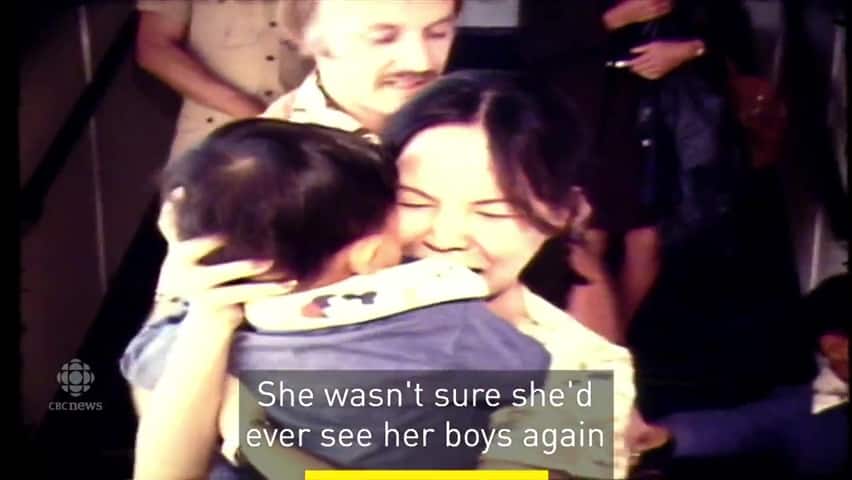 BC missionary meets with family he reunited in 1977

4 years agoVideo
0:54
Kim Jocson asked Reg Reimer to get her boys out of Laos and he did just that 0:54

It was 1977 and the communists had taken over large swaths of southeast Asia. Refugees were crammed into camps and families torn apart.

Amidst this backdrop, two young boys were smuggled across the Mekong River to Thailand from Laos, the threat of trigger-happy soldiers on either bank a constant.

Now, 40 years later in Calgary, those once-small boys have reunited with the B.C. missionaries who helped them slip through borders to safety.

"The reaction of Kim, the boys' mom, today, again was quite overwhelming," Reg Reimer told CBC News on Saturday.

"She can't get over thanking us."

In 1977, Reimer and his wife Donna, of Abbotsford, B.C., had a chance meeting with a mother at a church event in Regina, where Reimer was teaching at a seminary.

"We were assigned to go back to Thailand to work with refugees, and we met Kim and her husband at a church event," Reimer said.

"When they found out we were going to Thailand, Kim ordered me to get her boys. At that point I didn't know what I was getting into."

In the fallout from the Vietnam War, Kim Jocson and her husband had become separated from their two young sons, Rick, who was three years old at the time, and his older brother Eddie, who was seven.

"In all the confusion that followed the fall of Vietnam, Laos and Cambodia to communism, they were separated," Reimer said.

The parents were evacuated to Guam, the U.S. and then Canada, but the boys were left with a grandmother in Laos.

It took two attempts for the Reimers to get the boys out of Laos, because initially the grandmother would not release them to strangers.

"Kim sent us a little photograph of herself, I can remember. A small little photo, she was wearing a red dress. She wrote on the back of the photo, 'Mom, give the kids to whoever gives you this photo,'" Reimer recalls.

The grandmother finally agreed and the boys and the Reimers, with the help of other missionaries, began their long journey to Canada.

"They had to travel about 30 kilometres in Laos, cross the Mekong River and then another 80 kilometres to a refugee camp where we arranged to have them brought," Reimer said.

About five weeks later, after going through mountains of bureaucracy, the Reimers delivered Rick and Eddie to their ecstatic parents at the Regina airport where the family lived at the time. The initial reunion was captured by CBC cameras.

Rick Jocson, the younger son, describes his memory of reuniting with his parents in May 1977. 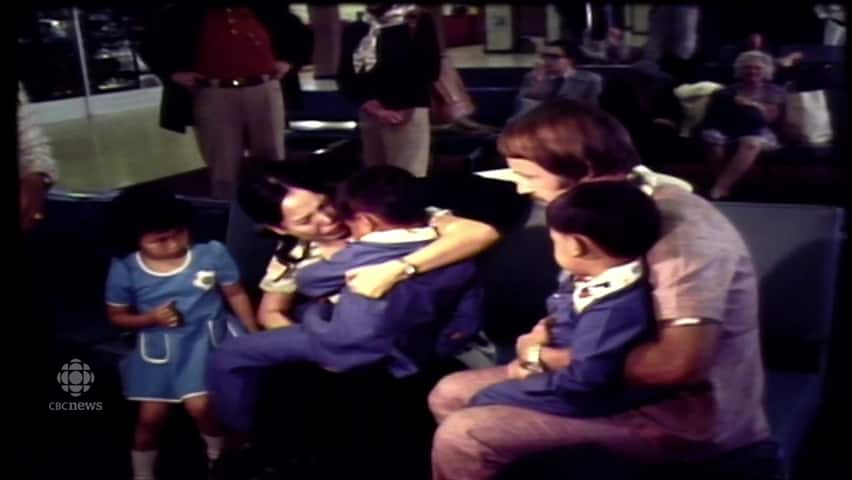 Emotional 1977 reunion between a mother and her 2 young sons

4 years agoVideo
5:01
RAW CBC footage of Kim Jocson seeing her sons after a missionary smuggled them out of Laos. 5:01

"That video just broke down every barrier. It really showed the vulnerability of my mom and my father," Rick explained.

"The sensitive nature of the whole reunion. Seeing them in that state, in a such a vulnerable state, is a lot."

The Reimers and the Jocsons went their separate ways until a few weeks ago, when Rick Jocson was able to track down the Reimers in Abbotsford and arrange a reunion.

Rick, Eddie, their siblings, children and mother Kim live in Calgary today, which is where they came together to meet the Reimers again.

"I feel great. I feel relieved, I feel happy. I feel like this is a milestone not for me, but for my family," Rick, a father of two, said.

"This is something we can look back on and anchor behind. The kids can look back and say, 'These are our roots. This is where we come from. This is what it took for you to have the life we have today.'"

Reimer says the boys are family now, even if not by blood.

"We're grandma and grandpa to their boys already," he said.

For Rick, his own children have put that 39-year-old reunion into perspective.

"Now as a parent myself, understanding the gravity … I can relate to that now. That is where I get choked up, when I think if I were to lose my boys and to be reunited with them, what I would do to hold them again."