A Calgary woman is thrilled to be home again, after what she describes as a return trip from a dream vacation in the Galapagos Islands that spiralled into 56 hours of hell.

Sarah Kirkpatrick says her trip to the Galapagos Islands was uneventful. Coming home? Not so much 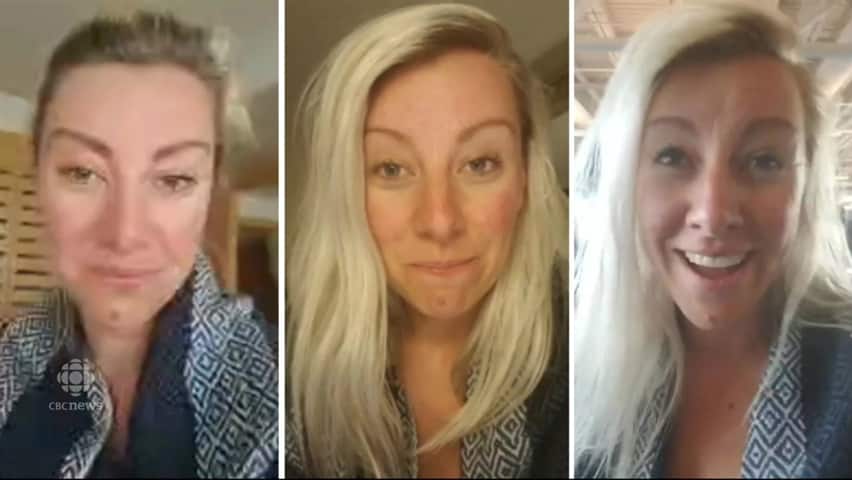 A Calgary woman is thrilled to be home again after what she describes as a return trip from a dream vacation in the Galapagos Islands that spiralled into 56 hours of hell.

"I think it was about 12 hours, with a seven-hour layover in Houston, so I went to the museum and stuff," Kirkpatrick told CBC News.

Coming home? Not so much.

"It starts Dec. 3 when I was leaving Cusco, Peru," she said.

The first flight was delayed for three hours due to weather, then the airline wanted 15 volunteers to get off the plane because it was too heavy. By the time they were ready to get going, they needed a fresh crew due to labour restrictions, Kirkpatrick said.

And then things got worse when she landed in the capital of Colombia.

"The experience at the Bogotá airport was just horrendous," she said.

"I waited for three hours at the gate and then we found out that a bird had hit the landing gear. So they cancelled my flight to Houston."

Kirkpatrick says Avianca Airlines put her up in a hotel but her luggage didn't make it out of Peru.

'No record of you being on this flight'

She returned to the Bogotá airport the next day and flew, uneventfully, to Los Angeles. It was supposed to be a three-hour layover there and then back to Calgary. She says that didn't happen.

"When I got to the gate, a big red arrow came up on the screen and they pulled me aside and they said, 'there's no record of you being on this flight.'"

Kirkpatrick says it's unclear who was responsible, as the original flight was booked through one airline and it was that airline that was to arrange the connecting flights.

She was directed to the original airline in another terminal that was a shuttle ride away. That first airline, she said, told her it was the connecting flight airline's job to fix this, because it booked it.

"They could get me a hotel and they would rebook my flight but they couldn't give me any compensation or anything."

Kirkpatrick says that the second airline then sent her back to the first.

"So no one's really taking responsibility and I don't know whose error it was. But I got a hotel for the night at the Hilton, the second night that I'd be in a hotel, and they gave me some food vouchers," she said.

Kirkpatrick returned to the Los Angeles airport the next day to learn there were no direct flights to Calgary and she would be going through San Francisco, she said.

"So when I got there the next day, Dec. 5, I went to my gate. It was changed. Then there was a delay for an hour for that flight, so I was going to miss my Calgary flight. I ended up calling United Airlines, just on a whim, and asked them like if I could get another flight to Calgary because of this delay I was going to miss my connecting flight," Kirkpatrick said.

"After 50 hours of traveling, I just wanted to make sure that I was probably going to get home that day."

She said there was no record of her being booked on the San Francisco flight, despite having a ticket with her name on it.

Kirkpatrick says the airline person she spoke to said she was booked on a flight to Denver, but then said she was bumped from that flight because of how the original airline booked it and she would need to contact them.

"I told him that I would not be calling and that he would be calling them," she said.

"He said fine. He put me on hold for half an hour. The gate lady for Denver said, 'We're closing the gate in five minutes and we can't let you on.' At this point, I started to get a little bit more hysterical. It had been three days of travelling and now I was not getting on this flight that I didn't know I was supposed to be on."

Left feeling nothing could be done

Kirkpatrick says a three-way call with both airlines left her feeling nothing could be done.

"I was more or less cry-screaming to her on the phone, when the gate people at United said, 'hang up the phone, we'll just get you on this flight.' I don't know what they did, but they printed off two tickets for me to get on that Denver flight. I guess I looked pretty distraught because everyone on the plane was asking how I was at the time I got to my seat," Kirkpatrick said.

The Denver flight worked and so did the return to Calgary, arriving at 6 p.m. on Wednesday, she said.

"When I landed, it actually felt like a dream. I was really grateful to be home. I lost a lot of my anger when I finally landed," Kirkpatrick said.

"I actually got E. coli when I was in Peru, so I'd been pretty ill and so the whole trip home I've just not been feeling well."

Kirkpatrick says that while she'd love to know who was responsible for everything that went wrong, she's happy to be home again.

"I am fine. I am safe. I was never in danger. It was just a really exhausting trip."

With files from Brooks Decillia and Tricia Lo