The Canadian Food Inspection Agency says inspectors did not find any E. coli contamination in 5,100 beef carcasses that were cut and processed over the past week at the XL Foods plant in Brooks, Alta. 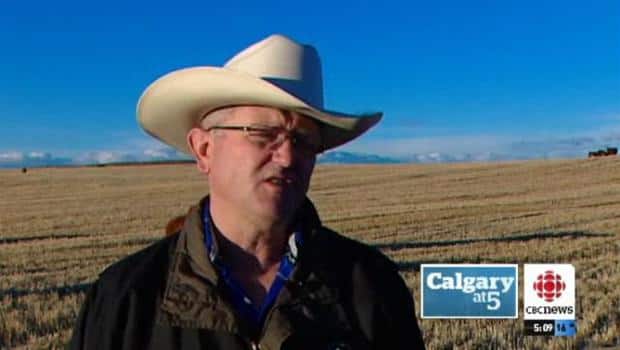 8 years ago
2:25
Ranchers react to the new management at XL Foods and what it means for the industry. 2:25

The Canadian Food Inspection Agency says inspectors did not find any E. coli contamination in 5,100 beef carcasses that were cut and processed over the past week at the XL Foods plant in Brooks, Alta.

"I can tell you that all of our results and those of the company are negative for E. coli," said Paul Mayers, associate vice-president for CFIA programs.

At the same time, CFIA confirmed one more person was infected with E. coli linked to beef from XL foods, bringing the total number of cases to 16. The CFIA says that person — a Quebecer who fell ill in September with the same strain of bacteria found at the food plant — is now recovering.

The plant’s licence was suspended on Sept. 27 because of concerns about E. coli contamination and deficiencies identified by CFIA at the facility. Since then, more than 1,800 beef products have been recalled.

On Friday, the CFIA said 5.4 million kilograms of primal cut meat —  the whole cuts of a cow such as chuck, rib, and round — currently being held at the plant and in cold storage could make it into grocery stores if XL Foods cooks it first.

The CFIA says it will test to those products to make sure they are safe.

During the Friday morning news conference, the CFIA had said recalled meat currently being held at detention centres might also make it back on to grocery shelves if it were cooked at high temperatures, but later said in an email to CBC News that XL Foods has confirmed all recalled beef product will be destroyed.

But it’s still unclear whether XL Foods plans to do that, or if it will destroy the beef instead.

Review to be completed over weekend

In another development, the CFIA says it plans to complete its review of the processing plant over the weekend.

From that point, officials will then complete its final report on the facility, which will determine when the plant will regain its licence. "I want to remind everyone that the plant will not be allowed to reopen unless we are confident that the food safety controls are being implemented effectively and consistently," Mayers said.

"When the plant is allowed to reopen it will resume normal operations under enhanced CFIA oversight, which will continue for as long as the CFIA deems necessary."