Deadly radon gas was found at unacceptably high levels in one out of eight homes in the Calgary area, according to a new study published in the Canadian Medical Association Journal.

Deadly radon gas was found at unacceptably high levels in one out of eight homes in the Calgary area, according to a new study published in the Canadian Medical Association Journal.

"Every region we looked at had houses above 200 becquerels per cubic metre," he said. "Beyond that, cancer risk is very certain and homeowners are advised strongly to mitigate their home."

Goodarzi said one in two Calgary-area homes are in "the danger zone" with levels over 100 becquerels per cubic metre.

Radon gas arises from the radioactive decay of radium, thorium and uranium in the bedrock and soils and permeates through the soil under high pressure — toward low- or negative-pressurized areas such as basements, according to the study.

The homes examined, which included single-family, condos, duplexes and townhouses, were tested for 90 days between 2013 and 2016 and represented an area encompassing 82 per cent of the southern Alberta population. 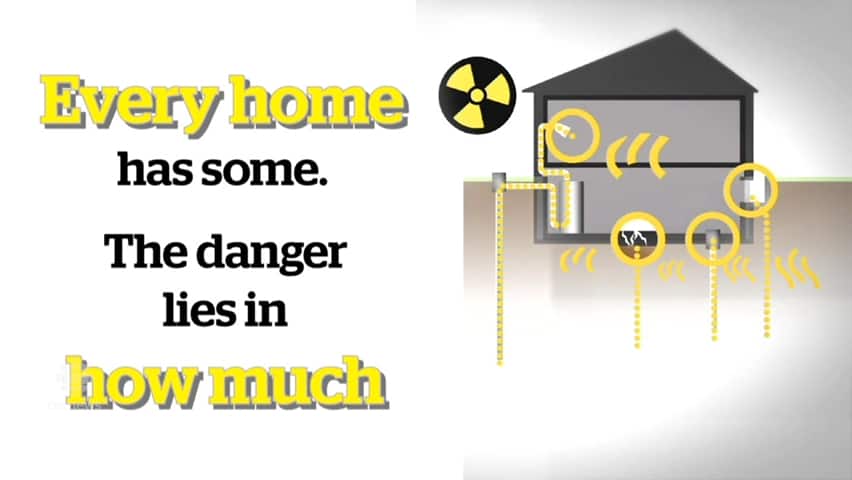 Radon gas: what it is and why you should figure out how much of it is in your house

4 years agoVideo
1:02
Radon gas: what it is and why you should figure out how much of it is in your house 1:02

Roughly 2,000 Albertans are diagnosed with lung cancer annually. Fifteen per cent of those diagnosed have never smoked, according to the study.

The good news is that radon testing is simple and effective, and if mitigation is needed, there are some very effective strategies, Goodarzi said.

"I would encourage everyone living in southern Alberta to consider testing their homes for radon gas. You can't see it, or smell it. You don't know you're breathing it in unless you test for it," said Fintan Stanley, who co-wrote the study.

Testing should be done between October and April to get the most precise results, Goodarzi said. Radon test kits cost between $50 and $100 and are available at most local hardware stores.

Goodarzi and his team are also still looking for volunteers to test their homes as part of their research.

Homeowners who register radon levels over 200 Bq/m³ should take action.

You can't see it, or smell it. You don't know you're breathing it in unless you test for it- Fintan  Stanley

"The most effective strategy is sub-slab depressurization, which really means you sink a little hole through the foundation of your home into the soil underneath and that gets hooked up to an air-tight fan that vents the radon up and outside."

Goodarzi said the mitigation devices so far have proven to be very long-lasting.

Bigger the house, higher the ratings

Goodarzi said one of the surprising results of the study was that newer homes — built within the past 25 years — have 31.5 per cent higher radon, on average, compared to older properties.

The reason seems mostly to come down to size, he said.

"Our homes we're building today are simply much bigger than they ever have been in the past," he said.

"So, if you double the size of the home sitting on the ground, it's twice the surface area upon which the home can draw radon up inside it."

The increased height of modern houses also plays a role, he said.

"They basically act like taller chimneys, drawing more powerfully upon the ground. As you heat the air in a house, the hot air rises, it creates negative pressure in the basement that sucks on the foundation. The taller the home, the more powerful that effect."

Also, since modern homes are also more airtight, it's increasingly important to have the correct balance of air intake and outgoing air, to keep the house from sucking too much on the foundation and pulling up the radon, he said.