About 60 people showed up for a protest at the Calgary International Airport on Tuesday, including singer-songwriter Jann Arden, to protest the practice of live horses being flown to Japan for high-grade sashimi meat.

About 60 people showed up for a protest near the Calgary International Airport on Tuesday, including singer-songwriter Jann Arden, to protest the practice of live horses being flown to Japan for high-grade sashimi meat.

"These are purpose-bred to be shipped to Japan, to be slaughtered there, to feed the very rich people. This is not to feed the poor," said Bragg Creek veterinarian Judith Samson-French. "So to me, this is unnecessary and very cruel."

Samson-French told the Calgary Eyeopener that the horses are not treated humanely during the long journey, often packed four to a crate with no separation.

She said this protest is about the treatment of the animals and not the cultural practice of eating horse meat.

"We're trying to raise awareness that this is happening, because most people do not know this is happening," she said. "And I have yet to meet someone that is not repulsed by watching these horses being exported for slaughter in Japan, in those conditions."

At the protest, Arden told CBC News that the industry operates in the shadows. 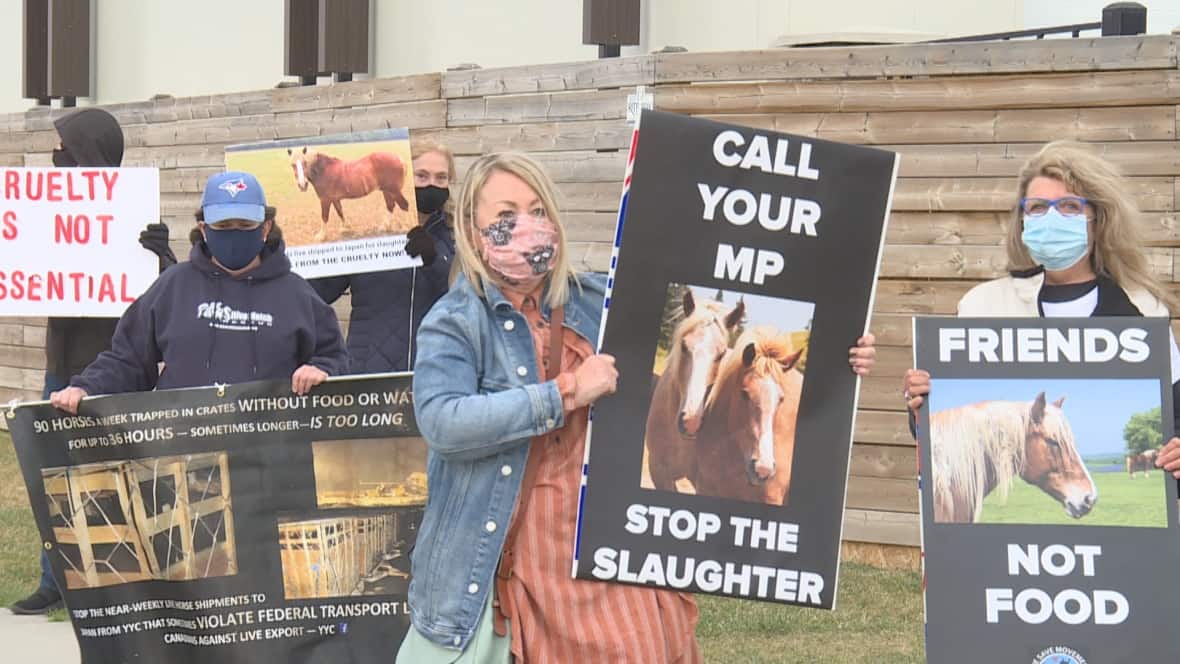 27 days ago
1:12
The Calgary musician is lending her voice to protests against the live export of Alberta horses, saying the transport conditions are inhumane. 1:12

"It's a really sinister side of agriculture," Arden said. "It's not like a bunch of workers feeding families, it's not that kind of industry. It's done under the cloak of darkness, it's very clandestine. They don't want you to know about it, and further to that they don't even follow the guidelines that the Canadian government has laid out."

The whole thing is "entirely unnecessary," Arden said, but it has developed in part because of the United States stopping horse slaughter in 2006.

"Now they have found loopholes, all their horses come up here through the Canadian border and are killed here, because the Americans won't even do it anymore," she said. "We're here to say, this is what's going on, in your own backyard, it's unbelievably cruel. If you could hear these  horses, when they load them in these crates, the sounds they make, and the horror they face on the other end, there's no regulations in Japan for slaughtering."

Arden said the horses are packed in together for many hours before they even make it on a plane, and that they are forced to stand in their own feces, without food or water, long before and during the overseas flights.

"We are trying to stop the export of some really majestic animals," Arden said.

Samson-French agreed, saying many regulations are being bypassed.

"Our laws in Alberta, in Canada, say that horses over 14 hands should be segregated for their safety. That is being bypassed right now. So four horses are put into a crate and then they sit on the tarmac or inside for 10 hours and then they're loaded, often in an airplane around four in the morning," Samson-French said. "So takeoff and landing, you can imagine four people in a small crate. How do you not lose your balance up and down?"

Samson-French said the horses are not at the end of their life, like most of the "unwanted" horses sent for slaughter.

"So, people that don't want their horse on their acreage anymore, the race track horses, the chuckwagon, the horses are not wanted anymore. These are all the unwanted horses," Samson-French said. "That's not what the Japanese want. They want the large, Belgian draft or cross-Belgian there … the unwanted horse goes to all the different other markets in China and in Europe. But these are specifically bred for the very wealthy people in Japan."

Samson-French said each horse can be worth up to $25,000 in Japan. She is against the practice of making the horses take this terrible journey.

"This is not unique to Canada, but I'm debating that animals, if they're going to be slaughtered, they should be slaughtered close to where they are raised, not shipped an ocean away. Some in New Zealand, they ship them by boat. Here, we're shipping them in the belly of an airplane."

The Canadian Food Inspection Agency oversees the shipping of live animals, and the agency told CBC News that a CFIA veterinarian inspects and signs off on each shipment.

Samson-French said her group has tried to appeal to the highest courts in both Canada and Japan.

"This is Canadian agriculture. This is a federal issue," she said. "So we've been trying through the different levels of government. So through my own riding here, which is [MP] John Barlow in the Foothills, we've been trying to through our minister of agriculture and through Justin Trudeau, we're also trying to through the ministry of Japan, where they're accepting these horses."

Samson-French said there have been some very sad moments as a result of this practice.

"Just this May, five horses arrived in Japan. They were down. One of them was dead and four were unable to rise," she said. "We've had another … before loading, even in the airplane in Calgary, was already down, was taken out, looked at, was lame, was put back in the crate lame, no painkillers, put back in the crate with the horses."

The veterinarian said she has tried to bring attention to the issue within her own industry.

"As a veterinarian, of course, I'm aware and I've been writing in the Canadian Vet Journal, our Health Act for Animals says that horses over 14 hands should be segregated. That's our law here, but that veterinarians are signing off saying 'no for their well-being. We think they don't need to be segregated'. Well, why do we have laws for animals in Canada?" she said.

"We have so few of them, especially for their safety. Why do we go against them? Either we we enforce our laws or we don't."

Arden said the Canadian Horse Defence Coalition has been battling this issue for years, and that she wants to help bring attention to the issue.

"These crowds are going to get bigger and bigger and we're not going to stop," she said, adding that the Canadian government seems to be turning a blind eye.

"They think people don't care," she said. "I believe people do care."

With files from Hala Ghomain and the Calgary Eyeopener.